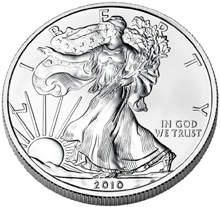 For the month to date, the United States Mint has already recorded sales of  4,724,000 American Silver Eagle bullion coins. This already ranks as the highest monthly sales total on record since the start of the bullion coin series in 1986. The previous monthly record of 4,260,000 coins was achieved in November 2010.

Demand for the Silver Eagle bullion coins began its ascent in 2008 when global uncertainties caused a renewed interest in precious metals investing. That year, the US Mint sold 19,583,500 of the one ounce silver bullion coins, representing a new annual record. New record highs were achieved in the following two years with 28,766,500 coins sold in 2009 and 34,662,500 ounces sold in 2010.

On January 3, 2011, the US Mint began selling 2011-dated Silver Eagle bullion coins to authorized purchasers. At the start of sales an inventory of 469,500 of the 2010-dated coins remained within the US Mint’s inventory. The AP’s were required to purchase one of the older dated coins for every four of the newer dated coins.

The United States Mint also imposed its standard allocation program, which rations the available number of bullion coins amongst the US Mint’s eleven authorized purchasers. The rationing program continues to be imposed, suggesting that actual demand for silver bullion coins is even higher than the already record breaking level.

Throughout the 2010 fiscal year, the US Mint worked to expand the number of silver planchets available to strike bullion coins, as well as increase productivity at the West Point Mint where the coins are struck. According to their latest annual report, the average monthly supply of all gold and silver blanks from vendors increased by 56% and output per labor hour increased by almost 23% compared to the prior fiscal year.