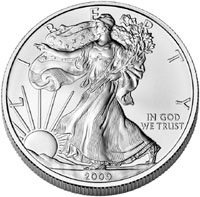 Throughout the year, the US Mint provides ongoing updates of the calendar year bullion sales figures. Monthly summaries of this information can be found in the precious metals sales reports section.

The sales figures and corresponding annual total represent the number of coins sold during the year, without respect to the date which appears on the coins. Therefore this information does not indicate the mintage for each year’s bullion coin. The previously reported 2009 annual sales total was 28,766,500.

Until 2008, the record mintage had stood at 11,442,335 for more than two decades. This mintage was achieved for the 1987 Silver Eagle, which represented the first full year of sales for the bullion coins. The coins had been introduced in the prior year, but were only available for the last few months.

Elevated sales levels for the American Silver Eagle have continued into 2010, but will demand (and planchet supplies) be high enough for another record breaking year? So far during 2010, the US Mint has sold 6,817,500 American Eagles. Of this amount 367,500 coins are known to be dated 2009, with the rest presumably representing 2010 Silver Eagles.