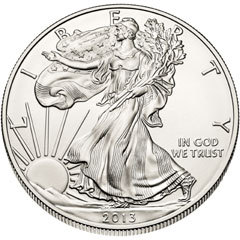 Based on the latest available figures, the United States Mint’s American Silver Eagle bullion coins have moved into record monthly sales territory. This occurs despite the fact that the coins have been suspended or unavailable for more than half of the month.

Sales of the one ounce Silver Eagle bullion coins have now reached 7,130,000 for the month to date. This already surpasses the previous monthly record sales total of 6,422,000 coins which was established in January 2011.

Lately, the US Mint has been encountering problems keeping up with an increased level of demand for the silver bullion coins. The 2012-dated coins unexpectedly sold out on December 17, 2012, which left a three week period during which no Silver Eagle bullion coins were available for authorized purchasers to order. Sales would not resume until the launch of the 2013-dated coins on January 7, 2013.

The initial orders for the 2013 Silver Eagle coins seemed to mark the highest one day sales in the history of the program. This was followed by elevated daily sales levels until the Mint announced that the silver bullion coins were temporarily sold out on January 17, 2013. Sales would remain suspended until the week of January 28 to allow sufficient time to build up an inventory of the coins. According to information provided at the time of the suspension, the Mint would begin allocating or rationing available coin supplies upon the resumption of sales.