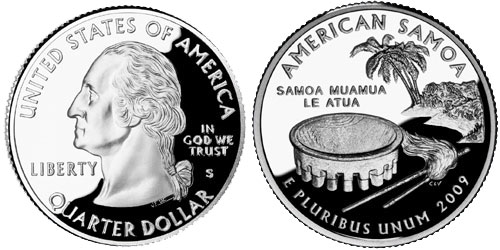 The reverse design of the quarter depicts the ava bowl, used to make a ceremonial drink in traditional ceremonies, and the whisk and staff, symbolic of the rank of orator. The background displays the coastline and coconut trees. An inscriptions reads SAMOA MUAMUA LE ATUA (Samoa, God is First). The reverse was designed by Stepehn Clark and sculpted by Charles Vickers.

Children under 18 years of age will receive a new quarter for free. Others will have the opportunity to exchange currency for new rolls of the American Samoa Quarter. A collectors forum will be held the night before on September 2, 2009 from 6:00 – 7:00 PM (GMT-11). Collectors will be able to express their ideas for future coinage.