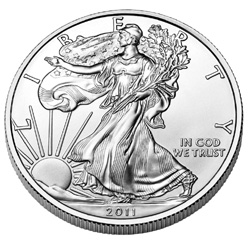 For November 2011, sales of the United States Mint’s most popular gold and silver bullion coins fell to their lowest monthly levels in years. This perpetuates a slow down in bullion sales that began in the previous month

Lower monthly sales for the typically popular Silver Eagles have not been seen since July 2008. Around this time, sales levels were frequently impacted by periodic suspensions and an ongoing allocation program, which limited the number of bullion coins that authorized purchasers could order from the United States Mint.

According to Michael White of the United States Mint’s Office of Public Affairs, during November 2011, there was no disruption in the availability of American Eagle gold and silver bullion coins. The sales figures constitute the orders placed by authorized purchasers.

American Gold Eagle bullion coin sales totaled 41,000 ounces for November 2011. This is down from 50,000 ounces in the previous month, and down more significantly from the 112,000 ounces sold in the year ago period. Lower monthly sales for Gold Eagles have not been seen since June 2008.