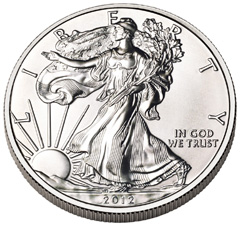 These two programs have been closely watched as a gauge for physical precious metal demand. Following the financial turmoil of the second half of 2008, gold and silver bullion coin demand rose to levels which the US Mint frequently characterized as “unprecedented.” The US Mint had problems producing sufficient coins to satisfy the surging demand leading to periodic sales suspensions and prolonged periods of rationing. In 2009, certain numismatic offerings were canceled as a result of the bullion situation. American Silver Eagles would achieve four consecutive years of record breaking annual sales.

During 2012, demand for the US Mint’s bullion coins has receded, ironically as the Mint has taken steps to increase their production capacity. Every month for the year to date, American Gold and Silver Eagle sales have shown a decline compared to the year ago period.