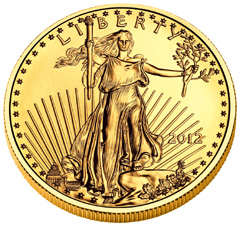 Following the strong sales experienced in the first month of the year, sales of the United States Mint’s American Gold and Silver Eagles fell sharply for the month of February. American Gold Eagle bullion coins recorded their lowest monthly total since June 2008.

It is typical for the US Mint’s bullion sales to see a decline after the seasonally strong month of January, explaining the month to month drop. However, sales also reflect a significant decline from the year ago period.

During February 2012, the US Mint recorded sales of 21,000 troy ounces worth of American Gold Eagles. This included primarily one ounce coins, with some additional quarter ounce and tenth ounce coins. The monthly total is down from 127,000 ounces sold in January 2012. It also shows a sharp decline from the 92,500 ounces sold in February 2011.

American Gold Buffalo sales for the month measured 7,000 ounces. The US Mint is continuing to sell 2011-dated coins remaining in inventory.

Sales of the America the Beautiful Five Ounce Silver Bullion Coins continued with just 300 coins sold during the month. This reflects sales of the 2011-dated issues.