After just one week, the United States Mint has received orders to fulfill the entire maximum authorized mintage for the 2009 American Eagle Platinum Proof Coin. The mintage was limited to a total of 8,000 coins. 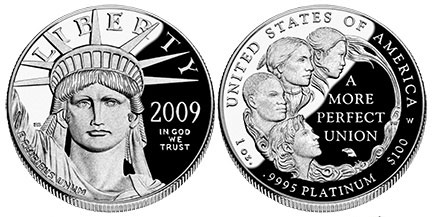 The 2009 Proof Platinum Eagle went on sale December 3, 2009 priced at $1,792. Each coin contains one ounce of .9995 platinum and is struck in proof quality. The reverse features a design emblematic of the principle “To Form a More Perfect Union,” depicting four faces of diversity with hair and clothing weaving together. The coin also represented the beginning of a new six year series of designs for the collectible Platinum Eagle, which will feature the core concepts of American democracy as stated in the Preamble of the Constitution.

Through December 6, 2009, the United States Mint had sold 7,207 of the maximum authorized mintage of 8,000. By this afternoon, orders sufficient to reach the maximum mintage had been received.

The US Mint continues to accept orders for placement on a waiting list. If additional coins become available due to order cancellations, orders will be fulfilled from the waiting list on a first-in, first-served basis.

The fast sell out for the 2009 Proof Platinum Eagle can be attributed to the lack of collectible precious metals offerings from the United States Mint and the absence of platinum bullion coin offerings. Typically, the US Mint produces a full line of collectible Gold and Silver Eagle coins, which are offered throughout the year. In October, these offerings had been announced canceled. The US Mint also typically produces four different sized platinum bullion coins for precious metals investors. After a long delay, these offerings were also announced as canceled for 2009.