The United States Mint recently revealed a new product known as the Making American History Coin and Currency Set. This product format, which includes one or more coins and legal tender or replica currency, has been used on numerous occasions in the past. One of the more popular offerings was the American Buffalo Coin and Currency Set released in 2001. 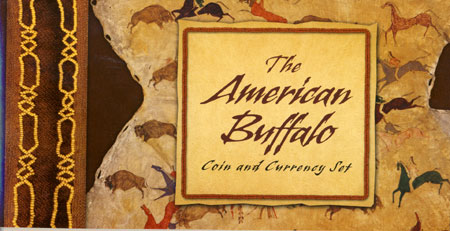 Public Law 106-375 enacted on October 27, 2000, authorized the minting and issuance of up to 500,000 silver dollars in commemoration of the National Museum of the American Indian (NMAI) of the Smithsonian Institution. The law specifically required that the design for the coin was to be based on the original 5-cent Buffalo Nickel  designed by James Earle Fraser. Surcharges received from the sale of coins would be distributed to the NMAI for the purpose of commemorating the opening and supplementing the endowment and educational outreach funds. 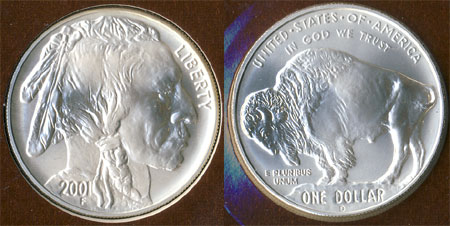 The obverse of the classic coin design depicts the profile of a Native American chief created from the composite of three real life models. The reverse depicts an American Bison or Buffalo standing on a mound.

The United States Mint created four separate product offerings for the American Buffalo Commemorative Coin Program. This included individual proof coins struck at the Philadelphia Mint with the “P” mint mark, individual uncirculated coins struck at the Denver Mint with the “D” mint mark, a two coin set containing one example of each, and the American Buffalo Coin and Currency Set. This special set carried a product limit of 50,000 units. The other products did not carry a specific limit, but collectively were subject to the 500,000 maximum authorized mintage established for the program.

The central products included in the limited edition set were the uncirculated version of the 2001 Buffalo Silver Dollar and a replica of the 1899 $5 Silver Certificate. The latter, which carried a likeness of Ta-to’-ka-in’-yna-ka or Running Antelope, was the only U.S. paper money issue which depicted a native American as the central feature. The replica was created by the Bureau of Engraving and Printing, specifically for inclusion within the set. 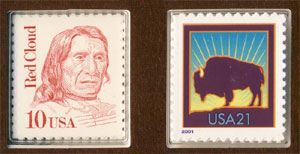 Other items in the Coinage and Currency Set included two stamps related to the obverse and reverse designs of the silver dollar. The first was a 10-cent stamp from the 1987 Great American Series featuring Red Cloud of the Ogalala Sioux. The second was a new 21-cent Bison stamp issued by the United States Postal Service in March 2001. Rounding out the product was a booklet, which included information on the central products of the set, the appearance Native Americans and the Buffalo on U.S. coins and postage stamps, and additional related historical background.

Sales of the American Buffalo Commemorative Coin products began on June 7, 2001. With a low maximum product limit of 50,000, the Coinage and Currency Set managed to sell out in just 5 days. US Mint Director Jay W. Johnson said, “Our Numismatics Division worked very hard to create a product that would be attractive and appealing to collectors, and we’re gratified at this enthusiastic response.”

A sell out across the program’s entire 500,000 maximum mintage occurred after just 14 days. Despite having one of the higher mintages amongst modern commemorative coins, the 2001 American Buffalo Silver Dollars and the related Coinage and Currency Set continue to command a strong premium on the secondary market. This is a testament to the beauty and enduring popularity of James Earle Fraser’s classic design.