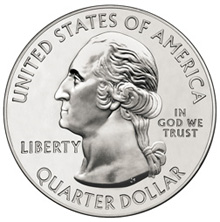 Bowing to consumer concerns about the excessive premiums being charged for the America the Beautiful Silver Bullion Coins, the United States Mint will delay the launch of the program. No orders placed by the primary distributors have been confirmed, while the Mint attempts to determine the appropriate course of action to best serve customers.

The new silver bullion program was expected to launch today. The coins would feature the designs of the America the Beautiful Quarters, stuck in 5 ounces of .999 fine silver. An extremely limited mintage of 33,000 units for each of the five different designs was announced by the Mint on December 1, 2010.

Coins would be sold by the United States Mint to their small group of primary distributors who are responsible for distributing the coins to the broader market. The cost of these coins to the distributors was set at a modest $9.75 premium per coin above the market value of the silver.

In response to the limited number of coins available and the high customer demand, at least one primary distributor began taking orders for the coins at a price of about $130 per coin above the market value of silver. Complete sets of the five designs were priced at $1,395. All 1,000 sets made available at this price sold out in less than 24 hours. Other bullion retailers and secondary market sources quickly began pricing the coins at even higher premiums. This had all taken place prior to the December 6, 2010 launch date for the program.

The United States Mint has just released the following statement about the 2010 America the Beautiful Silver Bullion Coins situation:

The United States Mint is aware of reports of concern by many consumers about the high prices and premiums being charged in the market for the newly released America the Beautiful Silver Bullion Coins.  We are evaluating these reports and collecting information in order to assess the appropriate course of action to make certain that our customers are best served in the distribution of the coins, and to ensure the widest possible availability, accessibility and affordability of these coins.

Earlier today, the US Mint sent the following memo to primary distributors: