Today, the United States Mint provided the release details for the America the Beautiful Silver Bullion Coins. The maximum mintages for these eagerly awaited coins will be lower than expected and numismatic versions will be available.

The new bullion program was authorized under Public Law 110-456. This is the same law that authorized the America the Beautiful Quarters series. In addition to the circulating quarters, the United States Mint will produce and issue 5 ounce .999 fine silver bullion coins bearing designs that are duplicates of the corresponding quarters. These coins must have a diameter of 3 inches and incused edge lettering indicating the bullion weight and fineness. 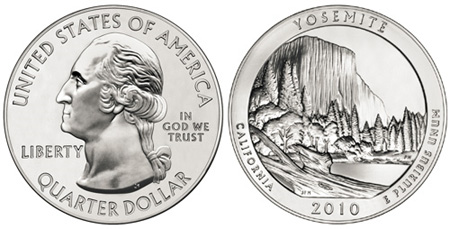 Additional details provided by the law indicate that the bullion coins may only be available for sale during the calendar year of release of the corresponding quarter dollar, and the maximum mintage is determined at the discretion of the Secretary of the Treasury.

During the first quarter of 2011, numismatic versions of the 5 ounce silver coins will also be made available. These coins will feature an uncirculated finish and carry the “P” mint mark. Maximum mintages for the collector coins has been set at 135,000 coins overall, divided as 27,000 of each design.