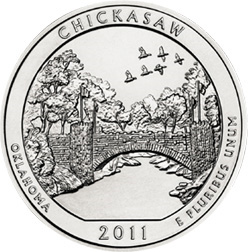 The United States Mint saw some increased interest in their America the Beautiful Silver Bullion Coins during the month of October. Sales across the three available designs reached 6,200 coins, more than double the amount sold in the previous month. Despite the increase, sales still remain extremely low when compared earlier monthly totals or American Silver Eagle sales.

The America the Beautiful Silver Bullion Coin Program was authorized by Congress to accompany the series of circulating quarter dollars. Each coin is struck in five troy ounces of .999 silver and has a diameter of 3 inches. Five different designs are available per year, which may only be issued during the year of release for the corresponding quarter dollar. The bullion coins are distributed through the United States Mint’s authorized purchaser network.

The first five designs of the series were issued in December 2010, with only 33,000 of each available. This year’s designs have been available at an initial quantity of 126,700 per design. The first two design managed to quickly sell out of this amount, while the subsequent designs have experienced slower sales.

Across all five of the 2011 designs, the US Mint has sold 390,000 of the America the Beautiful Silver Bullion Coins, accounting for 1,950,000 troy ounces of silver. The traditional one ounce American Silver Eagle bullion coins have sold 36,475,500 coins through the end of October.