Today January 10, 2012, the United States Mint began sales of the 2012 America the Beautiful Quarters Silver Proof Set. The five coin sets include each of the quarter designs for this year, struck in 90% silver.

The America the Beautiful Quarters Program features national parks or sites from each state, territory, and the District of Columbia depicted on reverse designs for the quarter dollar. The designs are released at a rate of five designs per year, with the program scheduled to run from 2010 to 2021. 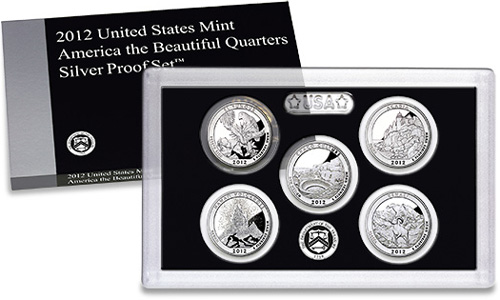 Reverse designs for this year feature El Yunque National Forest, Chaco Culture National Historical Park, Acadia Naitonal Park, Hawaii Volcanoes National Park, and Denali National Park and Preserve. These coins represent the eleventh to fifteenth releases within the overall series. The order of release is based on the dates the sites were first federally designated.

The coins are struck at the San Francisco Mint and carry the “S” mint mark. The coins are minted using specially prepared, highly polished dies, which produce coins with mirrored backgrounds and frosted cameo images.

The 2012 America the Beautiful Quarters Silver Proof Set is priced at $42.95, with no specified product limit and no household limits imposed. Orders may be placed for the sets online at http://catalog.usmint.gov/

Looking ahead, the United States Mint has scheduled the release of the clad version of the America the Beautiful Quarters Proof Set on January 17, 2012. The 2012 Presidential Dollars Proof Set is scheduled for release on February 23, 2012.