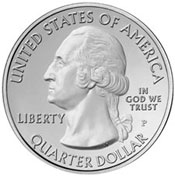 America the Beautiful Quarters products will include numismatic bags and rolls offerings. Circulating coins struck at the production facilities located in Philadelphia and Denver are specially packaged for collectors. The US Mint products include 1000-coin or 100-coin bags from either facility or a two roll set, which contains one 40-coin roll from Philadelphia and one 40-coin roll from Denver. The coins are specially packaged to displays the coin issue, mint of origin, and face value. These products are priced at a premium to their face value.

Two different annual sets will be issued which contain the five 2010 America the Beautiful Quarters. This will include clad composition (91.67% copper, 8.33% nickel) and silver composition (90% silver, 10% copper) proof sets. Each set contains the five proof coins in an individual plastic lens, housed in a collectible box with certificate of authenticity. Proof coins are struck multiple times with specially prepared dies and blanks. The resulting coins are sharply struck and extraordinarily brilliant with a cameo appearance.

The five quarters will also be included in the full annual proof sets. These sets will contain a total of 14 coins, with proof versions of each of the 2010 coins issued by the United States Mint.

Lastly, the annual Uncirculated Mint Set will contain America the Beautiful Quarters. This set contains a total of 28 different coins, with an example of each of the year’s coins from the Phiadlephia and Denver Mints. The coins contained in this Mint Set differ from those issued for circulation. They are struck on specially burnished blanks and have a satin like finish.

The preliminary release schedule for US Mint products containing America the Beautiful Quarters is listed below.