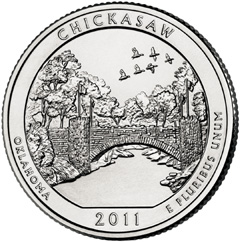 The America the Beautiful Quarters Program recently completed its second year of release, with five different designs representing National Parks or sites of America. The total mintage across the five designs rose compared to the previous year, although the increase was only attributable to a jump in production for the final design of the year.

The total mintage across the five different designs reached 391,200,000 compared to a mintage of 347,000,000 for the first five designs of the series issued in the previous year.

At the onset of the America the Beautiful Quarters Program, the US Mint attributed the lower production levels to decreased orders for new coinage placed by the Federal Reserve Banks. A large surplus of quarters had built up at the Federal Reserve Banks due to residual or redeposited coins from the State Quarters Program. Compounding the problem, the economic conditions of 2008 and 2009 caused a large number of previously issued quarters to return to active circulation, significantly reducing the need for additional payments to circulation by Reserve Banks. As a result of this situation, the Reserve Banks curtailed orders for new coinage and attempted to work down the existing surplus.

At the end of 2009, Federal Reserve Banks held about 3.8 billion quarters in inventory. This amount was reduced by 500 million as of May 31, 2010, according to testimony delivered by the Director of the Division of Reserve Bank Operations and Payment Systems. If the same rate of reduction was maintained throughout 2010 and 2011, the Reserve Banks may have finally reduced inventory levels enough to warrant increased orders for new quarters.

Based on the jump in production for the final quarter issued in 2011, this seems to be a distinct possibility. After two years of unusually low mintages, the America the Beautiful Quarters Program may see higher production and more widespread distribution in 2012.