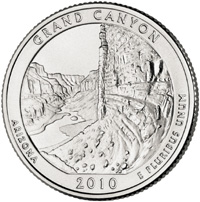 The mintage levels for the new program represent a fraction of the number of coins produced under the widely collected State Quarters Program from 1999 to 2008. The State Quarter mintages ranged from a high of 1,594,616,000 for the Virginia Quarter to a low of 416,000,000 for the Oklahoma Quarter. The average mintage per design was 695,952,000, or more than ten times the average mintage for the America the Beautiful Quarters Program so far.

The decreased production for the America the Beautiful Quarters has been attributed to the low demand resulting from economic conditions and the large existing inventories of previously issued quarters within Federal Reserve Bank vaults.

Many collectors have complained that the new quarters are difficult to obtain from banks or other channels of circulation. The low mintages certainly contribute to this situation, but another factor to consider is that an increasing proportion of the already reduced mintages are distributed through other channels.

The US Mint’s numismatic bags and rolls program packages certain circulating coins in US Mint branded wrappers for sale to collectors. As mintages have declined, these sales have accounted for larger and larger proportions of overall production. Based on the latest US Mint sales reports, the 2010 bags and rolls sales accounted for 22,212,940 quarters. Since each release remains on sale for one year, this number will continue to grow.

Another newly established channel of distribution is the Bulk Purchase Program. The US Mint allows bulk bags containing 200,000 quarters to be purchased directly, provided pick up is arranged by a licensed carrier. The purchase price is based on the face value plus a handling fee of 3%. Because of the high value of the bags and arrangements for pick up, the program is out of reach for most collectors, but likely utilized by larger coin dealers and mass marketers.

Based on testimony delivered by Edmund Moy, the US Mint had recorded sales of 97 bulk bags of America the Beautiful Quarters through mid year. This accounts for another 19,400,000 quarters, plus the additional sales that occurred in the second half of the year.

Collectively, the numismatic bags and rolls program and bulk purchase program represent at least 12% of the total mintage of 2010 America the Beautiful Quarters.