The United States Mint has announced the design selections for the 2015 America the Beautiful Quarters. The five coins to be issued for the coming year will feature the Homestead National Monument of America in Nebraska, Kisatchie National Forest in Louisiana, Blue Ridge Parkway in North Carolina, Bombay Hook National Wildlife Refuge in Delaware, and Saratoga National Historical Park in New York.

These coins will be issued for the sixth year of the ongoing series which features national parks or sites in each of the 50 states, 5 territories, and the District of Columbia. 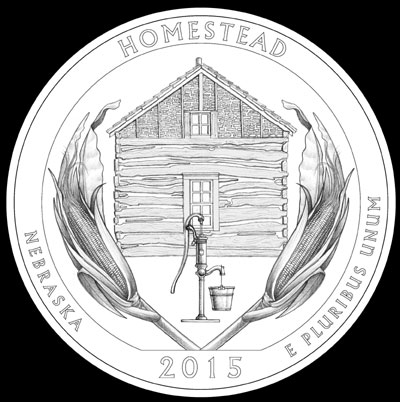 The reverse design for the 2015 Homestead National Monument Quarter carries a representation of the three fundamentals of survival common to all homesteaders: food, water, and shelter. Inscriptions read “Homestead”, “Nebraska”, “2015”, and “E Pluribus Unum”. The reverse was designed by Ronald D. Sanders and will be sculpted by Jim Licaretz. 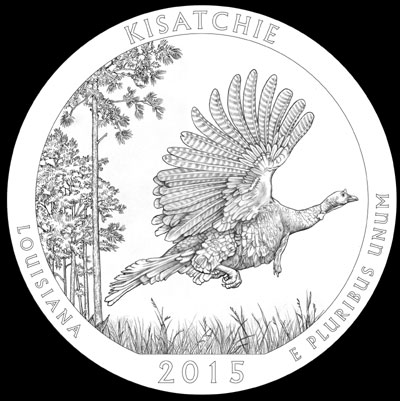 The design for the 2015 Kisatchie National Forest Quarter features the image of a wild turkey in flight over blue stem grass with long leaf pine in the background. Inscriptions include “Kisatchie”, “Louisiana”, “2015”, and “E Pluribus Unum”. The reverse was designed by Susan Gamble and will be sculpted by Joseph Menna. The 2015 Blue Ridge Parkway Quarter reverse design depicts the grace and curvature of the road hugging the side of the mountain. The American Dogwood, which is the North Carolina state flower, appears within the foreground. Inscriptions read “Blue Ridge Parkway”, “North Carolina”, “2015”, and “E Pluribus Unum”. The reverse was designed by Frank Morris and will be engraved by Joseph Menna. 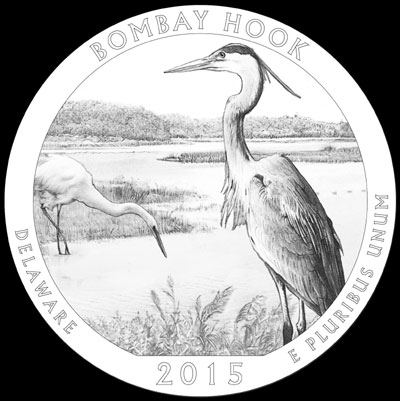 The reverse design of the 2015 Bombay Hook National Wildlife Refuge Quarter carries a depiction of a great blue heron with a great egret in the background. The inscriptions read “Bombay Hook”, “Delaware”, “2015”, and “E Pluribus Unum”. The reverse was designed by Joel Iskowitz and will be engraved by Phebe Hemphill. 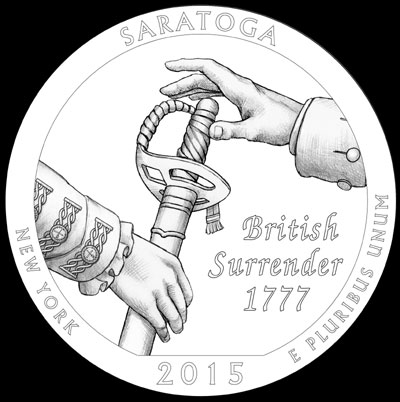 The reverse design for the 2015 Saratoga National Historical Park Quarter features a close up depiction of the momment when General John Burgoyne surrendered his sword to General Horatio Gates. This was a pivotal moment, which many believe marked the beginning of the end of the American Revolutionary War. The inscriptions include “British Surrender 1777”, “Saratoga”, “New York”, “2015”, and “E Pluribus Unum”.

All five coins will feature a common obverse design containing the 1932 portrait of George Washington designed by John Flanagan. The inscriptions read “United States of America”, “Liberty”, “In God We Trust”, and “Quarter Dollar”.

The 2015 America the Beautiful Quarters will be released for general circulation and also be included within various numismatic products offered by the United States Mint. The designs from the quarters will also appear on five ounce silver bullion and collector coins.