Release dates for the 2014 America the Beautiful Quarters have been provided by Federal Reserve Bank Services. Representing the fifth year of the program, these coins will continue the series of circulating quarter dollars featuring a national park or site from each state, territory, and the District of Columbia. 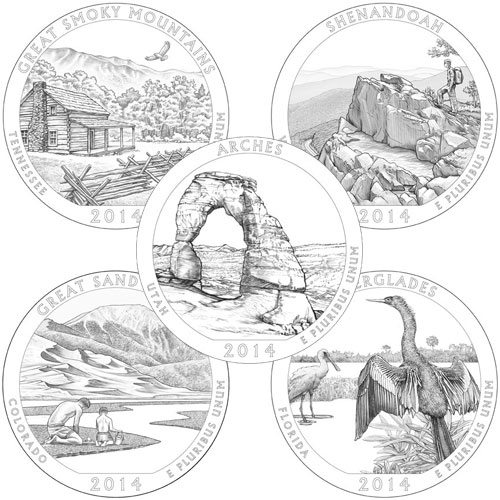 The published circulation release dates for the 2014 America the Beautiful Quarters are included below. These dates may remain subject to change.

Unlike the previous State Quarters Program, the Federal Reserve does not supply unmixed quantities of newly released quarters to banks and financial institutions. As such, even after the indicated release dates, the coins may not be readily available through banking channels.

The United States Mint does offer for sale to the public bags and rolls of circulating quality quarters for each design. The start of sales has typically coincided with the circulation release date.

Launch ceremonies are also typically held at the park or a related location on or around the circulation release date. Following the ceremony, the new quarters have been made available at face value through a coin exchange. The launch ceremony for the Great Smoky Mountains National Park Quarter has been scheduled for January 28, 2014 at 5:00 PM ET, located at the Great Smoky Mountains National Park Sugarlands Visitor Center. Details for other launch ceremonies have not yet been provided.