Negreiros is regarded as occupying a central position in the first generation of Portuguese Modernists. Born in the former colony of Cape Verde to a Portuguese father and Cabo Verdian mother, Negreiros was a unique figure the 20th century Portuguese art as he did not attend an art school or academy. His precocity as a youngster led him to devote much of his time from a young age to humorous and satirical drawing. 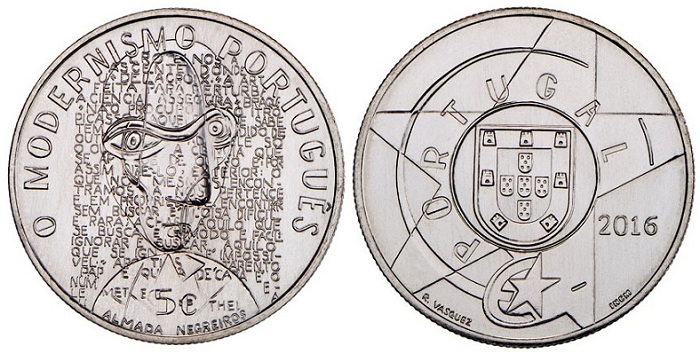 To say that Almada Negreiros’s visions were futuristic would be an understatement, so much so that in 1917 he and like-minded futurist visionary Guilherme Santa-Rita Pintor (1889 – 1918) published Portugal Futurista magazine, writing the “Futurist ultimatum to the Portuguese generations of the 20th century.” Almada Negreiros also promoted a conference — the first of its kind — entitled the “Futurist Session,” in which he appeared wearing a flight suit to highlight the activity of airplane flight, still in its infancy. Aside from literature, Almada also painted, composed ballet choreographies, and worked on tapestry, engravings, murals, caricatures, mosaics, and stained glass, drawing inspiration from Cubism and Futurist movements. 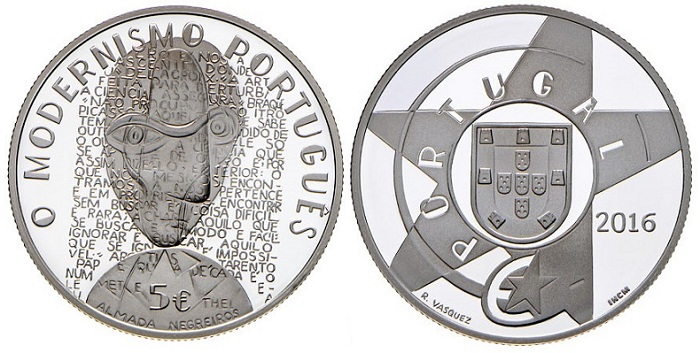 Between the years 1927 and 1932, Almada-Negreiros lived in Madrid, having had an active role in the artistic and literary scene of that city. As revolutionary and futuristic as his ideals and bodies of artwork were, Almada-Negreiros’ stance during the dictatorial regime of António de Oliveira Salazar (1932 to 1968) was ambiguous and in some ways contradictory. His work on propaganda posters and public mural paintings seemed to contribute to the regime’s promotion, but on the other hand he was a provocative critic of the conservative and narrow-minded Portuguese society of his time. By 1934, Almada-Negreiros was married to the painter Sarah Afonso; their only son, José Afonso de Almada Negreiros, was born in Lisbon, where the couple settled permanently. Almada-Negreiros died on June 15, 1970. 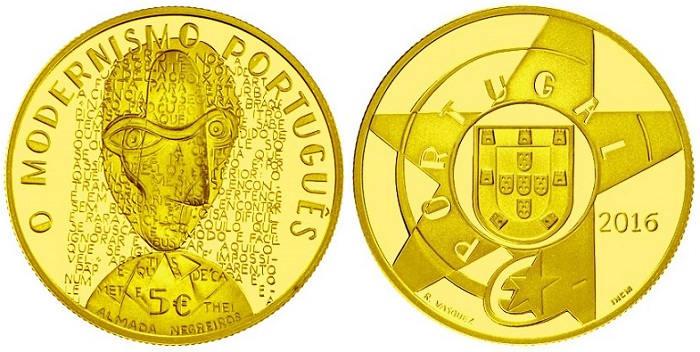 The coins are designed by Rui Vasquez and all versions share the same motifs on the obverse and reverse. The obverse depicts the self portrait of Almada completed in 1947 and is framed by original text with references about art. The reverse includes the shared design for all EUROPA coins issued in 2016, which includes a super-sized star motif in the center of the coin. The crest of the Republic of Portugal is centered in the design, with the EUROPA star logo placed just below the crest.

The coins were released on April 26 and are available separately. Please visit the Web site of the INCM for a complete list of all available coins and products. International sales are dispatched where applicable.