The Government of South Georgia & South Sandwich Islands have issued (1st March) an unusual new coin which celebrates the largest known animal ever to exist – the Blue Whale. This stunning new coin is being issued as an amazing Blue Titanium coin in honor of this wondrous animal and features an image of a Blue Whale with her calf swimming in the sea with the sun’s rays penetrating the water.

At 30 metres (98 feet) in length and weighing 180 metric tons, the Blue Whales were plentiful in nearly all the oceans in the world until the beginning of the 20th Century.  For over a century they were almost hunted to extinction by whalers until they were protected worldwide by the International Whaling Commission and no legal hunting currently occurs. Due to its large size, several statistics of this amazing mammal are the largest in the animal kingdom. A blue whale’s tongue weighs approximately 2.7 metric tons and when fully expanded, its mouth is large enough to hold up to 90 metric tons of food and water although it cannot swallow anything larger than a beach ball. The largest blue whale ever measured was female and was found near Grytviken in South Georgia in 1909.  She was 33.85 metres (111 feet) long. 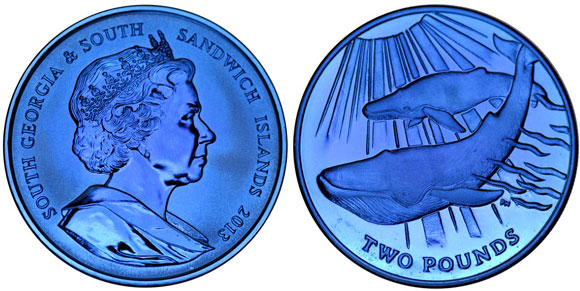 The obverse of the coin carries a fine effigy of Her Majesty Queen Elizabeth II by Ian Rank-Broadley FRBS with the obverse struck in reverse proof (with the effigy in polished appearance and the background frosted) to really show the color of the blue Titanium.  Each precious metal coin has been struck four times to create the famous Pobjoy Proof finish. The coin is also being produced in Cupro Nickel and Proof Sterling Silver.

For more information on this and other coins, please visit the website of the Pobjoy Mint at: www.pobjoy.com – information offered in English – international orders fulfilled.