On October 11, 2012, the United States Mint released the first coin of 2012 for the First Spouse Gold Coin series. In accordance with the authorizing legislation, this coin features Alice Paul and the Suffrage Movement rather than a First Lady or a representation of Liberty.

Public Law 109-145 authorized the First Spouse Coin Program to honor the spouses of the Presidents on a series of one-half ounce .9999 fine gold coins. The coins are released on the same schedule as the Presidential Dollar coins. In the instances when a President served in office without a spouse, the law provides that the obverse design will feature a portrait emblematic of Liberty as represented by the design from a circulating coin issued during the Presidency. An exception is made for the Presidency of Chester Arthur, which instead calls for the name and likeness of Alice Paul to appear. She was a leading figure in the suffrage movement, who was born on January 11, 1885 during Arthur’s Presidential term. 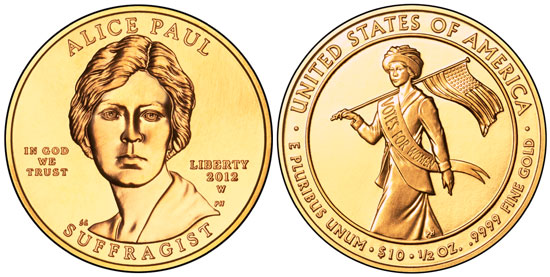 The obverse design of the 2012 Alice Paul Gold Coin features a portrait designed by Susan Gamble and sculpted by Phebe Hemphill. Inscriptions read “Alice Paul”, “In God We Trust”, “Liberty”, “2012 W”, and “Suffragist”. The reverse, which was designed and sculpted by Phebe Hemphill, features an image of a participant marching in the suffrage parade holding an American flag and wearing a banner reading “Votes for Women”. Inscriptions in the outer circumference of the coin read “United States of America”, “E Pluribus Unum”, “$10”, “1/1 oz”, and “.9999 Fine Gold”.

Both proof and uncirculated versions of the coins are available from the United States Mint. The maximum authorized mintage across both versions has been established at 13,000 pieces.

Initial pricing for the coin has been set at $1,054 for each proof coin and $1,041 for each uncirculated coin. The pricing may be adjusted weekly based on the average market price of gold. Orders may be placed online at http://catalog.usmint.gov/

The next three releases for the program will feature Frances Cleveland, Caroline Harrison, and a second coin for Frances Cleveland. The authorizing legislation calls for two coins to be issued for Cleveland, since her husband served as President in two nonconsecutive terms.