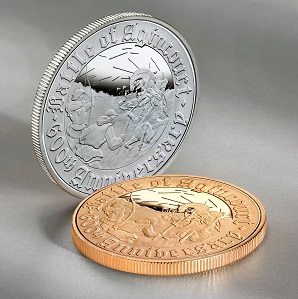 The Treasury of Alderney has issued a new crown coin remembering the historical battle of Agincourt, known as one of the most decisive battles between England’s King Henry V (1387 – 1422) and France’s Constable Charles d’Albret (d. 1415). Fought on the October 25, 1415, this pivotal moment in the Hundred Years’ War was characterized by the muddy terrain, by deadly longbows used by English and Welsh archers, and by the strategic tactics employed by King Henry V.

King Henry V claimed the title of King of France through his great-grandfather Edward III. English kings were generally prepared to renounce this claim if the French would acknowledge the English claim on Aquitaine and other French lands, according to the terms of the Treaty of Brétigny. During the spring of 1414, King Henry V called a meeting of the Great Council to discuss the possibility of going to war with France, but his lords implored him to negotiate further and moderate his claims.

Further negotiations resulted in the King agreeing that he would give up his claim to the French throne if France’s King would pay the remaining 1,600,000 crowns outstanding from the ransom of King John II, who had been captured and released at the Battle of Poitiers in 1356. France would also concede English ownership of the lands of Normandy, Touraine, Anjou, Brittany and Flanders, as well as Aquitaine. King Henry also proposed that he should marry Princess Catherine, the young daughter of Charles VI, and receive a dowry of 2 million crowns.

The French responded with a counter-proposal for marriage with Princess Catherine by offering a dowry of 600,000 crowns, and an enlargement of Aquitaine. By 1415, negotiations had ground to a halt as the English claimed that the French were not negotiating in good faith. On April 19, 1415, Henry again asked the Great Council to support war with France, and this time they agreed. 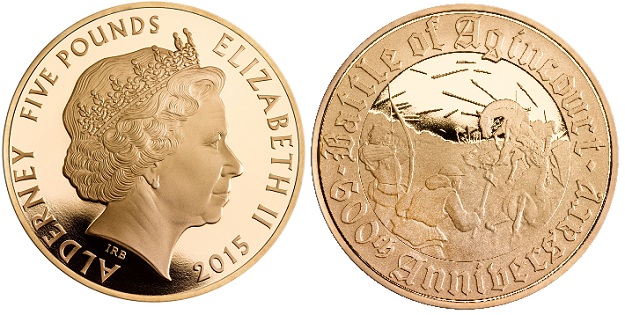 Historians estimate that the French army had 12 to 15 thousand soldiers gathered at Agincourt–mainly men with conventional arms for the time. By contrast, Henry V’s English army had perhaps 8,000 to 8,500 soldiers, the majority being archers. Considering the victory to be theirs, the French celebrated the night before the battle, their frivolity being heard by Henry’s men who waited for sunrise in silence under the King’s orders.

On the day of the battle, the French were unprepared and quickly fell into disarray when they faced a fierce storm of arrows from Henry’s archers–the longbow being a formidable long-range weapon. The French had planned to knock the English archers out of the fight with a cavalry charge, but could not find enough men to join the attack on horseback, fearing that the arrows would harm their horses. King Henry, meanwhile, had ensured his archers were protected by a wall of stakes and by flanking woodland.

The French charge ultimately failed, but the retreating cavalry clashed into the French men-at-arms advancing on foot. The arrow storm slowed their advance, causing the men to crowd in on each other. They were so tightly packed they could not raise their weapons. Some fell at the mercy of Henry’s archers, and some suffocated in the mud while others piled on top of them.

After the victory, Henry V headed for Calais and returned to England, where he was greeted by fanfare during his entry to London on the November 23. The outcome of the war fulfilled some of Henry’s initial requests, as he ended up marrying the French king’s daughter, with their son–later known as Henry VI of England & Henry II of France–becoming heir to both thrones. 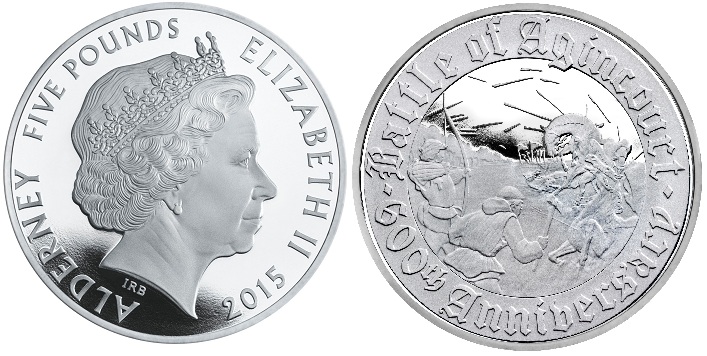 The coin, issued in both gold and silver, is struck by the Royal Mint on behalf of the Treasury of Alderney. It was designed by Glyn Davies, who has been an engraver at The Royal Mint since 2012. The reverse side shows a lightly armored archer in the foreground with a hatchet or hammer, weapons thought to have caused damage to the French knights. The French are depicted in heavy armor and on horseback. Trees surround the field, providing cover to the archers. The obverse side includes the effigy of HM Queen Elizabeth II as created by Ian Rank-Broadley and used on Alderney coinage since 1998.

The coin is available separately in either gold or silver. Each piece comes packaged in a custom presentation case, along with a certificate of authenticity. For more information on this and other coins issued by the Treasury of Alderney, please visit the Web site of the Royal Mint.  Information is offered in English, with international orders dispatched where applicable.