The 1936 Albany Commemorative Half Dollar is an issue that was struck to commemorate the 250th anniversary of the granting of a charter to the city of Albany, which established that would later become the capital of New York State. While the anniversary was one of local significance (and reportedly the citizens of Albany didn’t seem to care that much about the anniversary either) the committee that would be responsible for distribution managed to convince Congress to pass legislation authorizing the issuance of a commemorative half dollar. As a result numismatists throughout the country would become familiar with the celebration, and over time, despite only commemorating a local issue, the coins would become one of the more popular commemorative half dollars.

Albany, New York is located north of New York City close to the Atlantic Ocean. Fur trappers explored the area as early as the 16th Century and a brief French settlement existed on the site of present-day Albany around 1540, but this small fort was flooded by what would become known as the Hudson River shortly after having been erected. More permanent European activity would not come until the Dutch settled part of present-day New York State in the early 17th century. Henry Hudson (of commemorative coin fame) claimed the area for the Dutch during his explorations in 1609 and the Dutch erected, in 1614, a fort on the same site as the short-lived French Fort. In 1618 the fort would be flooded (again), rebuilt in 1624 (the Dutch initially named it Fort Orange), and thirty years later a small settlement called Beverwijck (“bever” being the Dutch word for beaver, although this might be a coincidence as there is a possibility that the town was named after a city in the Netherlands with the same name) had been established near the fort. Beverwijck was an important settlement in the Dutch Colony of New Netherland but Dutch settlement in the area ended when the English took over in 1664, renaming most of the Dutch settlements including Beverwijck, which would become the town of Albany.

Albany would slowly grow in importance and in 1686 it would receive a city charter by New York Governor Thomas Dongan on July 22 of that year. This is the event that would prompt the issuance of a Commemorative Half Dollar two and a half centuries later. After this the city grew in importance and while it never would become as famous as New York City located south of Albany, the city certainly became an important transportation hub for upstate New York and vital for the economy of the state. The capital of the state was moved to Albany in 1797, making it the second oldest state capital of the country.

The Albany Dongan Charter Coin Committee was responsible for the creation and distribution of this issue. They enlisted Albany born sculptor Gertude K. Lathrop to design the commemorative half dollar. She came from a family of female artists and was known for her naturalistic medals, many of which featured wildlife local to the Albany area. Besides the Albany Commemorative Half Dollar she is also responsible for the design of the 1938 New Rochelle Commemorative Half Dollar. 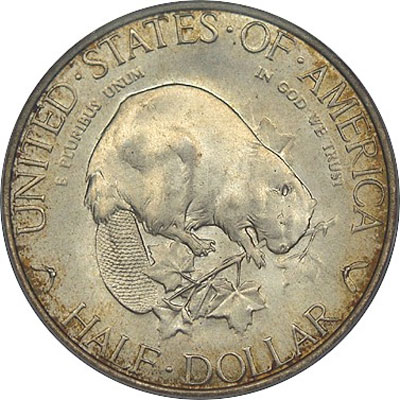 Lathrop featured an American beaver prominently on the center of the obverse, modeled after a living beaver, that she kept in her studio during the creation of the design for this commemorative. The beaver is seen eating a branch of maple, as both the beaver and the maple are common to the Albany area. On top is UNITED•STATES•OF•AMERICA and near the bottom is HALF•DOLLAR, which are separated by two examples of the fruit of the maple tree, called maple keys. Between the beaver and the lettering along the upper half of the rim is E PLURIBUS UNUM on the left side and IN GOD WE TRUST on the right side. 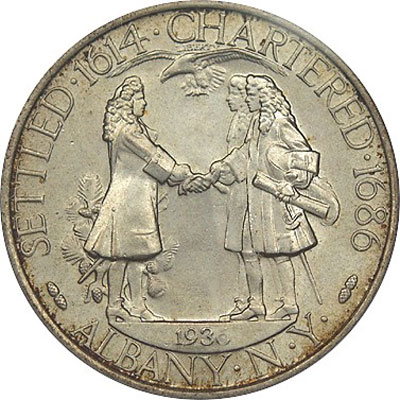 The reverse features the standing figure of Thomas Dongan on the left side, shaking the hand of Peter Schuyler, the first major of Albany. Behind Schuyler is Robert Livingston, Dongan’s secretary. They are standing on a half oval, which has the date of issue (1936) on it. Behind Dongan there appears to be part of a pine tree. In very small letters, incused, are the designer’s initials “GKL” to the left of this tree of branch. Obviously the three figures are fully dressed in 17th century clothing. Above them there is a flying eagle with its wings spread, and the word LIBERTY appears in small print above the eagle. Along the upper half of the rim the words SETTLED•1614•CHARTERED•1686 are seen, and below the three figures is ALBANY•N•Y•. This is separated from the rest of the design by two pinecones from the rest of the lettering along the rim.

Initially the committee had urged Congress to only authorize 15,000 coins, but the legislation enacted on June 16, 1936 called for no more than 25,000 pieces struck. These were minted at the Philadelphia Mint and sold to the public at $2 each, but interest was low, and many pieces remained in storage for years to come. A total of 7,342 unsold pieces were returned to the Philadelphia Mint in 1943 and melted, but more remained in stock. In the middle of the 1950’s, almost two decades after the issue had originally been issued, the State Bank of Albany was reportedly still selling this issue for $2 a piece but sold out soon thereafter since the pieces commanded a larger premium in the numismatic market at that point.

Most likely because of the naturalistic and attractive design, numismatists have generally considered the Albany Commemorative Half Dollar to be one of the more attractive classic commemoratives. As local interest was low the majority of pieces were either purchased by the collecting public or by dealers and the majority of surviving examples do so in uncirculated condition. Gems are popular but not scarce, and condition-wise this issue does not become rare until it reaches the MS-67 level. To reach this particular grade level the beaver on the obverse must be free of distracting marks and most examples that have graded this high will feature some kind of attractive toning, with orange-golden toning the most common on this issue. PCGS has graded a single MS-68 while NGC has graded five at that grade level, with none finer at either service.