The Bank of Albania have issued three coins which mark the country’s centennial anniversary of Independence. The coins, one gold, one silver and one base metal issue, include designs which highlight the anniversary date and personalities who were instrumental in the formation of the new state.

The Albanians, who are a distinct people, have had a recorded presence in parts of south-eastern Europe since around 150 AD. The Name “Albanoi” first appears in the historical record in Byzantine sources of the late 11th century. A more comprehensive geo-political state was formed under the Ottoman Empire which saw Albania reach a position of influence within the empire during the early half of the 15th century. A noted rise of Albanian resistance to Ottoman rule came in the person of George Kastrioti “Skanderbeg” (1405 –  1468), a nobleman who managed to bring together all the Albanian princes in 1444 and form the League of Lezhë. Today, Skanderbeg is remembered as a symbol of both nationhood and Albanian identity. Independence was achieved in 1912 during the first Balkan war with the defeat of the remaining Ottoman forces in Europe by the armies of Greece, Bulgaria, Montenegro and Serbia. The proclamation by Ismail Qemali, a distinguished leader of the Albanian national movement was made in the city of Vlora, on 28th November 1912. Albania has evolved from principality (1914) to a Republic (1925) and a Monarchy under the then-president who styled himself as King Zog I and ruled from 1928 until his exile in 1939. After the Second World War, Albania endured more than 45 years under an authoritarian socialist regime and was once considered among the least productive nations in Europe during these years. Albania re-emerged as a Republic once more and the first democratic elections were held in March 1992. Albania is currently a candidate country for EU membership and since 2009 has been a member of NATO.

200 Leke: The obverse depicts the founder of the modern state of Albania, Ismail Qemali in a front-facing portrait along with the commemorative years “1912” and “2012” on either side of the portrait. The text “SHQIPERI – ALBANIA” is placed above the portrait and his name appears below. The reverse includes a stylized depiction of the country’s national symbol, that of the double-headed golden eagle along with the coin’s face value of 200 Leke and the commemorative text “100 VJET PAVARESI”. Struck in .900 fine gold to proof quality, the coin has a weight of 15.5 grams and a diameter of 25.4 mm. A mintage of 1000 pieces has been authorized.

100 Leke: The obverse includes a replica of the country’s declaration of independence in the center of the coin. Around the replica, is the text “SHQIPERI – ALBANIA 1912” above the primary design along the upper edge. Along the lower edge is the text “AKTI I SHPALLJES SE PAVARESISE”. The reverse design includes the country’s national symbol, that of the double-headed golden eagle in the center with the commemorative date “28 NENTOR 1912” above the primary design with the text “100 VJET PAVARESI” along the lower edge. The coin’s face value of 100 Leke is seen just under the eagle. Struck to proof quality in .925 fine silver, the coin weighs 30 grams with a diameter of 38 mm. A total mintage of 1000 coins has been authorized. 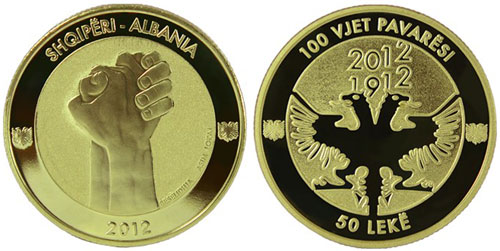 50 Leke: The obverse design depicts in the center of the coin, two clasped hands symbolizing unity & strength. Above the primary design is the text “SHQIPERI – ALBANIA” and the year of issue, “2012” below and along the lower edge. The reverse includes an image of the national symbol, the double-headed golden eagle along with over-lapping years of “2012” and “1912” just above the eagle. Along the upper edge is the text “100 VJET PAVARESI” with the coin’s face value of 50 Leke positioned below the primary design along the lower edge. Struck in cupro-nickel-zinc, the golden-colored coin has a weight of 12 grams and a diameter of 27.2 mm. A total mintage of 10,000 coins has been authorized.

The Bank of Albania have begun retailing the coins directly from their launch date of December 7th and advise that interested collector’s inquire to their main offices in Tirana for international orders, please visit their webpage for more information at: http://www.bankofalbania.org/web/How_to_purchase_coins_and_banknotes_for_numismatic_purposes_6251_2.php