You’ve heard the old saying, “Let’s agree to disagree,” when two viewpoints are at odds in a meeting or other get-together. Before third-party grading, that phrase often pertained to numismatics in that the owner of a coin during a typical transaction inflated a grade while the seller deflated it.

After all, the owner wanted to sell the coin for a higher price whereas the buyer wanted it on discount. These days, more often than not, grade disagreements occur between owner and grading company. Collectors who “agree to disagree” with the returned holdered coin may be out hundreds, if not thousands, of dollars.

In such cases the collector has to decide whether to fight the grade or live with it.

This week I decided to fight grades by the top two grading companies, NGC and PCGS.

NGC’s grade was clearly a mistake, which the company calls “a mechanical error,” although I suspect “human error” would be more appropriate. 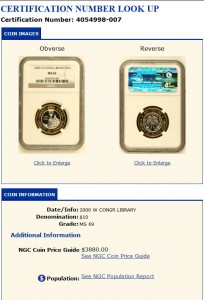 Click on and expand the picture of a 2000-W Library of Congress bimetallic $10 platinum and gold piece. Can you spot the error?

The coin is obviously a proof and not a mint state sample. A proof MS69 is worth about $1500, valued at less than half of the rarer mint state MS69. (For me to have kept it with that certification and value would have been unethical.)

Only I don’t think the coin is PF69. I’ve inspected it multiple times with a high magnification loop and cannot see any flaws. So I’m not only challenging the proof vs. mint state designation but also the numerical grade under the assumption that anyone who mistakes a proof for a mint state is apt to have overlooked a PF70.

Prediction: The coin will be returned PF69, and I will agree to disagree about that. 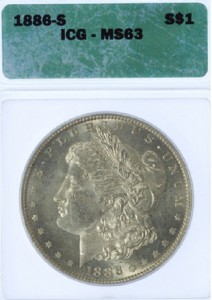 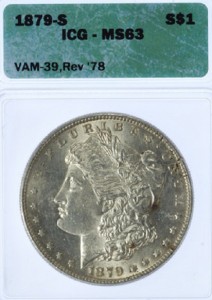 The PCGS case is far more challenging, although in my opinion equally as mistaken. See for yourself. Click on and expand pictures of two ICG coins, an 1886-S and an 1879-S reverse of 78, both graded MS63. I submitted these coins as CrossOvers, designating the lowest grade acceptable for the 1886-S was MS62, the grade it was given, whereas I foolishly said “any” on the 1879-S coin–a lesson in that for future submissions. 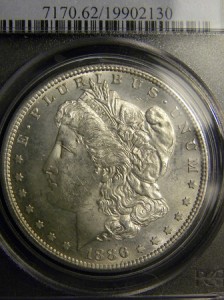 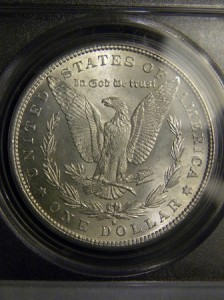 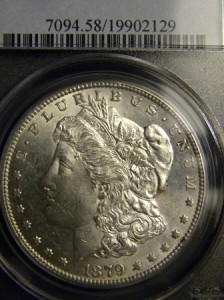 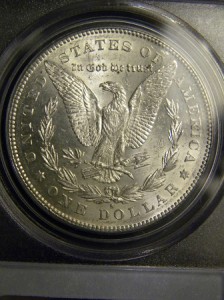 I knew what I needed to supply for PCGS to acknowledge my viewpoint. If I made my argument by sending the 1879-S for regrade without the 1886-S, PCGS could have stated that it needed to inspect both coins. Conversely, if I sent in the 1886-S stating that I agreed with this grade, but not the other, PCGS Customer Service would be thrown for a loop, because I only paid for one coin in a regrade submission.

Moreover, I also enclosed with my submission pages of documentation, including pictures of each coin in their ICG and PCGS holders, along with a copy of my original submission form.

Below is a copy of my cover letter.

I am enclosing two coins with certs graded one after the other in a crossover submission:

DO NOT REGRADE the 1886-S. It is enclosed merely for your comparison so that you can see the 1879-S has better luster, fewer marks, stronger strike—and yet has been re-graded AU58.

I am taking the extra step of sending the 1886-S to you for comparison purposes as PCGS is known for consistency and these grades appear to be inconsistent. If I did not include the 1886-S, a grader can claim she or he needed both coins to acknowledge my argument documented by two certs slabbed one after the other

I know, I know. PCGS is used to its grades being final. If the company truly is the top third-party grader, as I believe, it will acknowledge the discrepancies as outlined in my letter above and agree to agree with me. The only excuse I can think of at the moment is that grading standards differ for an 1886-S than for an 1879-S rev. of 78.

I have a response for that, too, based on the excellent book, A Buyer’s Guide to Silver Dollars and Trade Dollars of the United States, by Q. David Bowers.

My 1879-S rev. of 78 lacks bagmarks, and in as much as PCGS already gave it a grade, it cannot assign a Genuine “altered” label.

I’ll keep our viewers posted, literally, on Coin Update when the coins are returned to me. Keep in mind I’m ready to be persuaded by other arguments, including ones from PCGS, NGC or your own! In the meantime, you can comment on my viewpoint. After all, we can agree to disagree without fee in Coingrader Capsule!