Any time a numismatic writer begins with disclaimers, as I am now, you can be sure the content in one way or another will rile someone. Although I am a member of the Citizen’s Coinage Advisory Committee, the views expressed herein are my own concerning the 50th Anniversary Gold Kennedy Half Dollar and the US Mint’s decision in August to suspend retail sales in Philadelphia, Denver and Washington, D.C., as well as at the 2014 ANA World’s Fair of Money in Rosemont, Illinois.

Let’s start with the 50th Anniversary Gold Kennedy Half Dollar. I never liked the idea. The US Mint was not honoring the 35th President of the United States but a coin depicting a portrait of JFK in a minting process that initially accented and then smoothed over his hair above the ear, in response to a request by First Lady Jacqueline Kennedy. Many believe the obverse design is fetching and the reverse, by former mint engraver Frank Gasparro, noble. Well, yes– if your like the United States seal. (Gasparro made the “e pluribus unum” somewhat larger on the half dollar.)

This reprise by the Mint was going to be a hot-seller because of the tens of thousands of JKF Half Dollar hobbyists. My sole contribution to the project as a member of the CCAC was noting that the date on the obverse should be 1964-2014, rather than just 1964, to distinguish the new coin from the thousands of gold-plated 1964 half dollars still found on occasion in rolls.

I knew the new coin would be popular, but I never anticipated the groundswell perpetuated in part by NGC and PCGS labels, which helped create a mob scene at Rosemont, Ill., during the ANA show. I wasn’t there. But one of the best accounts of the coin-buying frenzy was written by Barry Stuppler under the title: “Kennedy Gold Coin Becomes a Numismatic Disaster.”

Stuppler made these points:

Ungodly profits have a tendency to cause brawls and worse, especially when the buyers are not hobbyists but are bused in for the sole purpose of making a quick buck off of a gold half dollar. Profits were out of this world, especially the coin bought for $1240 and slabbed PR70DCAM by PCGS with the phrase “1st coin sold–Chicago”–on the label. That specimen went for $100,000. You can read all about that in Coin World by clicking here. 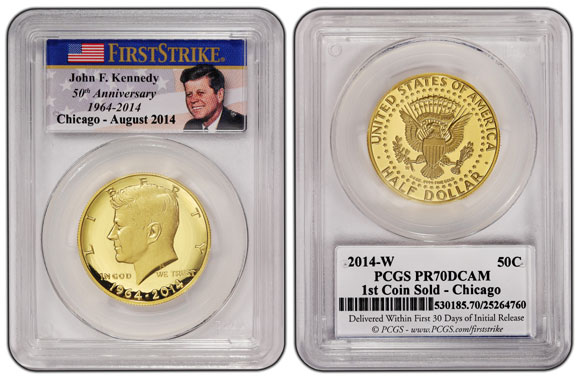 As viewers know, I often take a hard look at the slabbing companies and the questionable but nonetheless legitimate profits being made for what is printed on the label, be it “Early or First Release®,” “First Strike®,” or, in this case, “1st coin sold–Chicago.”

As Stuppler says in his article about the Kennedy gold half dollar, “You are not buying or investing in a rare coin; you are paying a very large premium for a label that has little to no chance of becoming part of a registry collection by PCGS or NGC. ”

The numismatic fiasco, or if you prefer Stuppler’s word “disaster,” will be repeated again as long as the US Mint produces desirable gold coins in new or enhanced styles with increasing safety concerns that (a) will require more security at shows to monitor bad behavior because of long lines forming in the middle of the night, (b) could eventually result in thefts of coins from the bourse, especially when hundreds of non-collectors are bused in, whose sole purpose is to make quick, easy money, and (c) could tarnish the good name and reputation of the US Mint, particularly if bad behavior leads to a death or felony crime. 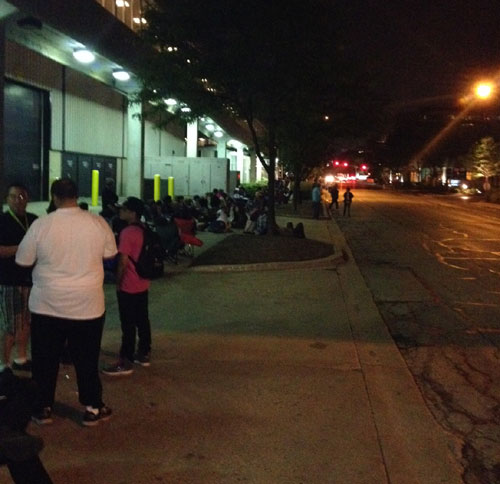 A more timely question is how, in particular, are these advance sales helping the hobby–which the US Mint truly wants to effect, creating new generations of collectors–if non-collectors, profit-seekers, corporate branders and more costly security-driven shows are the result?

As you might have anticipated, I have a solution that will further the hobby and bring thousands more real and prospective collectors to the US Mint website: a lottery.

Here’s how it would work:

Oh, and what about the ANA? How will it profit from lottery now that alluring new gold coins will not be sold onsite by the Mint?

Imagine this: Mint officials on the first day of the show alongside a gargantuan screen with a digital roulette wheel spewing out 100 winning numbers and nicknames every hour and cameras on site capturing the sullen faces of dealers who had to advertise in advance in coin magazines asking winners to contact them if they want to make a killing.