Key date coins have always been favorites of both beginning and advanced collectors. Coins such as the 1909-S VDB Lincoln Cent and the 1916-D Mercury Dime have been touted as low-mintage issues ever since they first entered circulation. They have captured the imagination of both young and old, and many dreams have come true when one is acquired and added to a set. But with respective mintages of 484,000 and 264,000, one has to wonder if these are truly low-mintage coins. At first glance, with many other coins from either series having mintages into the hundreds of millions, they might in fact be a really low-mintage and true rarities. But looks can be deceiving, and as many experienced collectors will know either coin is not particularly hard to find.

In this article we’ll explore some low-mintage coins that are still affordable, although they are generally not considered to be easily found, unlike the aforementioned cent and dime. The two coins have their own history and are always a joy to see because of it, but there are many more issues that are worthy of being considered low-mintage coins. Three criteria have been used when making this list of five coins: the coins had to have a mintage of 250,000 at the most (less than the 1916-D Mercury Dime), struck for circulation (eliminating Proof and commemorative coins) and struck before 1964 (excluding the modern issues). They would also have to be affordable to the collector that might or might not be able to afford a 1909-S VDB Cent or a 1916-D Dime, having the same or a lower price level in circulated grades.

The Half Cent series is an interesting one that perhaps does not quite get the attention it deserves. Nicknamed the “little half sisters”, they were struck between 1793 and 1857, although unlike their larger counterparts the large cents, there were quite a few “gap years” in which none were produced. By the mid 19th century prices had been increasing and demand for these low-value coins had decreased, with the mintages being low. The 1850 ranks as the 2nd lowest mintage 19th century half cent (after the 1857, which is the last year of issue and more popular as such) with only a few 19th century dates having a lower mintage. Yet, the issue remains very affordable up to the lower mint state grades, although those are anything but easy to find. The 1849 shares a similar story but is a little bit easier to find, despite having a virtual identical number of coins minted.

The 1865 Three Cent Silver is not the lowest mintage three cent silver coin struck for circulation, as all from 1867 (4,000 struck) to 1872 (1,000 struck) have lower mintages. Despite the lower mintages of subsequent issues I choose this coin as it is a little bit easier to find in lower grades than the others. By the time the Civil War had ended and the 1865, Three Cent Silver coins came into circulation, a nickel coin of the same denomination had been introduced, and it would lead to the demise of the silver variant. Mintages of the final years were extremely low and not that many were saved, making them very hard to find in any grade, with most preserved by collectors in mint state condition. Despite this they are very affordable in lower grades whenever encountered (which is very, very infrequently). Interestingly enough the 1866 had a mintage of 22,000 but is about equally as scarce as the others.

This is another coin whose low-mintage resulted in many being saved by numismatists, making it when encountered generally having a grade of MS-60 or higher. Low-grade examples do exist, and are even more affordable, with an ANACS VF-20 selling for $242 not too long ago. The late 1870s and most of the 1880s saw many of the silver coins having extremely low mintages, although the dimes did pick up after 1882, most likely because of their heavy use in everyday commerce. A whole article could be written about these low-mintage seated coins of the period, as they have their own facts and stories to tell, but for now we’ll focus on this little dime. Going back to it, the 1879 seated dime ranks as one of only a few Philadelphia minted seated dimes of having a mintage below 30,000. Its price level, however, is only marginally higher in uncirculated grades than virtually any other seated dime, especially so at the gem level (MS-65). 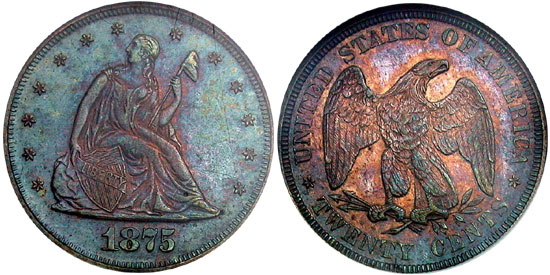 The 1875 was the first year of issue for the short-lived twenty cent denomination, only struck for circulation that year and the next year. With the exception of the 1875-S, all mintages were low, yet prices remain relatively affordable for all coins, except the two issues struck at the Carson City Mint. The coins were never popular with the general public, who thought that they were too easily mistaken for a quarter (due to the similarity in strike) and the denomination was quickly forgotten by the general public. The 1875 Philadelphia issue has the lowest mintage of any of the three mints that year, yet is only slightly more expensive than the much more common San Francisco issue.

The 1913 Barber Half Dollar is the first of a trio of low-mintage halves that would conclude the Barber series in 1915. The 1913 has the highest mintage of the trio but perhaps surprisingly is the hardest of the three to find. Most likely the majority entered circulation where they were not noticed by collectors until many years later. Yet, some must have been saved, as many much higher mintage Barber Halves have had more examples certified by the leading grading services. Like most dates in the series the 1913 becomes extremely difficult to find at the VF and XF level, and coins graded fine are not all that easy to find either. Very Good graded examples, however, are still very affordable for any of these three coins (of which the 1914 had the lowest mintage at 124,000 pieces, with the 1915 having a mintage of 138,000). None of these issues will cost much more than $100 in VG, a great bargain if you were to ask me!

While this article might make it sound that all these coins are great purchases and that the 1909-S VDB cent and 1916-D dime should be avoided at all costs this is certainly not the case. Yes, either of the two coins have more coins minted and surviving than any of the five coins highlighted in this article, but it should not be forgotten that demand for Lincoln Cents or Mercury Dimes is much higher than demand for an half cent or twenty cent piece. While in the grand scheme of things those two coins might not seem like low-mintage coins, they certainly are in a series where all other dates had many more produced, and of which many more survived. Yet it is interesting to see how the perception of “scarcity” changes from series to series and is based on a combination of factors, in which mintage, number of surviving examples, and popularity are just a few.