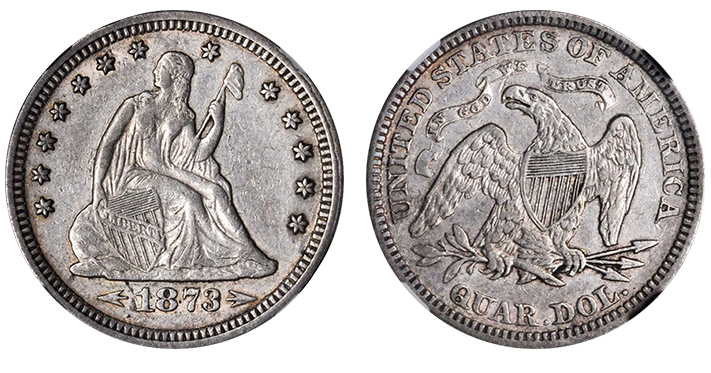 The Liberty Seated quarter series ran from 1838 to 1891 and was seen in the pockets of many Americans during much of the 19th century. A long-running series, it went through multiple design changes, but kept relatively close to the original design by Christian Gobrecht. The series is filled with rarities and is extremely difficult to complete, but even for collectors on a budget there are many coins that might be interesting to pursue. In this article we will take a look at five coins of this series that have an interesting backstory or are quite scarce, making them excellent buys for less than $100 apiece.

The year 1853 was somewhat special for American coinage. That year, the weights of all silver coins were reduced, as the value of the silver in the coins had become worth more than the coins’ face value. On the quarter and half dollar this was made obvious not only with arrows alongside the date (as with the half dime and dime), but also with outward-radiating rays on the back, surrounding the eagle. While the arrows would remain for a few years (until 1855), the rays were removed the following year, creating an iconic one-year type. Luckily for modern-day collectors, mintages were quite high, and today $100 should buy you a nice Very Fine of the Philadelphia issue.

Spend a little more: Demand for this one-year type always is high, as all type collectors seek an example. This is especially the case with Uncirculated pieces. For about $300, however, you should be able to find a strong Extremely Fine or even low-end About Uncirculated, and a coin that, especially if it displays luster in the protected areas, makes for an excellent buy.

The 1859-O is a coin that should be worth more money, but for whatever reason, this scarce New Orleans Seated quarter remains quite affordable in circulated grades. Its mintage of 260,000 pieces puts it among the lower mintages of both the latter half of the decade and all the New Orleans Mint issues. Despite this, circulated mid-level pieces remain within reach for right around $100, and you should be able to find a Fine or maybe even a VF graded example for that kind of money.

Spend a little more: Thanks to its scarcity this coin goes up exponentially in value with each higher grade, and Uncirculated pieces are considered rare. You might want to look for a fully original EF of this issue, which should cost around $300, but don’t expect to find such a coin easily.

Mintages of all silver coins dropped significantly during the American Civil War, and most quarters struck during the later war years are considered very scarce. The 1862 already saw a drop in mintage, with 932,000 pieces produced for circulation, compared to 4,853,600 produced the previous year. Despite the lower mintage it sells for about the same kind of money as some of the higher-mintage issues from before the Civil War, making this in my opinion an excellent buy, and a nice memento of the turbulent first half of the 1860s. With some searching you should be able to find a strong, original VF for about $100, a coin that no doubt entered circulation after the war ended, as circulation of silver was nonexistent during the war years.

Spend a little more: Again, this is a coin that you can improve in quality by spending more, but don’t expect to find a Choice Uncirculated example with good eye appeal for less than $750. If you want to find a lightly circulated example of this issue, however, you should be able to pick up a coin in the AU-53–55 range for about $250.

In 1873 the weight of the Seated quarter was once again reduced, and once again arrows were added next to the date to signify the change. The reverse had been modified in 1866 by the addition of IN GOD WE TRUST on a scroll above the eagle, creating a separate type. Generally speaking, this With Arrows variety is scarcer than those from the 1853–1855 period, as mintages had dropped considerably by 1873. That year, the Philadelphia Mint produced 1,271,160 of the With Arrows variety. This issue is generally available, and a certified VF is certainly within the realm of possibility for $100.

Spend a little more: One issue of this type that you might want to consider is the 1873-S Arrows, a coin that had a mintage of just 156,000 pieces. Although it’s much scarcer than its Philadelphia counterpart, a couple hundred dollars still gets you in the game, and you should be able a decent Fine/VF for about $200.

The 1880-S was somewhat of an odd year for Liberty Seated quarter production. The mints in use at the time focused their efforts on producing large quantities of Morgan silver dollars, and quarters in particular suffered, being produced only at the Philadelphia Mint in small quantities during the decade (for example, just 5,000 pieces were struck for circulation in 1884). The only branch-mint issue of the 1880s is the 1888-S, which had a mintage of 1,216,000 pieces, more than the Philadelphia Mint produced during the entire decade. It also is the only Liberty Seated quarter of the 1880s that can be purchased for $100 or less, and you should be able to add a nice VF/EF to your collection with a little bit of searching.

Spend a little more: Despite the high mintage this issue is actually quite scarce in Uncirculated grades, as virtually all entered circulation and remained there, with very few quarters having been produced in the previous years. If you want to find a coin with minimal circulation shoot for an AU, which will take some searching—but if you do find one it should cost about $200 for a decent-looking, original piece.   ❑