Struck every year from 1793 to 1857 (with the exception of 1815), the large cent was one of America’s most commonly used denominations of the first half of the 19th century. The cent, or penny as it is often called, might now be a mostly obsolete and rarely used denomination, but at one time it had actual value and people used it every day in commerce. It is no wonder then that in 1857, when the large cent was replaced by a smaller version, people started searching for different dates of the denomination and putting sets together of the coins they’d grown so accustomed to, essentially leading to the beginning of large-scale American coin collecting. Now, more than a century and a half after the last large cents disappeared from circulation, interest in the series remains strong, and many collectors put together date or even variety sets of the different types. This, however, is not a cheap endeavor, and the series might seem daunting to the collector on a budget. However, this article will show that even at a budget of $100 per coin, there are plenty of options to add some appealing large cents to a collection. 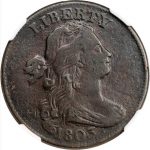 The first large cent type that is relatively affordable is the Draped Bust design, struck from 1796 to 1807. This design was struck in large numbers but also used in similar large numbers, so high-grade examples remain rare. For the collector on a budget, however, this type is not unobtainable, and a well-circulated Good of some of the dates can be found (with some searching) for less than $100. Of course, at that price level, the coin will no longer show most of its detail, but even then the coin will be a survivor from the very first Philadelphia Mint, a building on 7th Street in Philadelphia that was in operation from 1792 to 1833. Good dates for the collector on a budget to seek in low grade are the 1803, 1805, and 1806.

Spend a Little More: Very popular with collectors are dates from the 18th century, representing some of the earliest federal coins a collector could hope to acquire. The 1799 Draped Bust large cent is a classic key date, but with some searching a decent 1798 large cent can be found. Examples with a relatively clear date tend to sell for a premium, but even then a nice, problem-free Good should be available from time to time for a relatively modest $200–$250 or so. 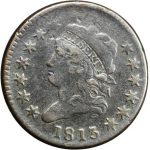 Struck in the midst of the War of 1812, the 1813 Classic Head large cent is a very scarce issue with a relatively low mintage of just 418,000 pieces. Most pieces spent considerable time in circulation, and most survivors are well worn. This type was struck in overall smaller numbers than some of the other large cent types, making it a more challenging type coin, but $100 should still find you a decent Good 1813 large cent. When you are seeking a coin such as this at that grade level, try to find pieces with as much of a complete rim as you can find, as that is usually an indication of a strong coin with claims to a higher grade.

Spend a Little More: This date goes up gradually in value in higher grades, with VF’s selling for right around $1,000 and problem-free AU’s often selling for $3,000 or more. A strong VG is more in the realm of reality, as they will cost around $200 or $300, and these are coins that provide a lot for your money. (Continued below.) 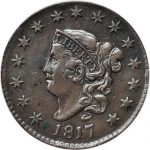 To many collectors, the Coronet (or Mature) Head design will fail to win any prizes for beauty, but from a collecting standpoint this series (struck from 1816 to 1839) is very interesting. The series includes numerous interesting varieties, such as the 1817 cent with 15 obverse stars. This is considered to have been an engraving error, where the engraver of the die just kept on going until he ran out of space instead of conforming to the then (and now) standard 13 obverse stars. For this interesting and somewhat scarce variety, $100 should get you a nice Fine and a coin that has an interesting story to tell.

Spend a Little More: Again, you can basically make it just as expensive as you’d like as the value of this variety increases with every grade. Nice VF’s are about $250 and will provide a coin with lots of detail remaining. Be careful of problem coins, which on these large cents are often those with corrosion, as many survivors have been found over the years by metal detectorists and have spent decades (if not almost centuries) in the ground. 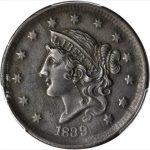 The 1839 Silly Head large cent is a transitional variety that fits between the older Coronet Head and the Braided Hair large cent. The exact history of the name is unknown; it appears they have been called “Silly Heads” since at least the 1860s for no apparent reason, as the difference in the design between this and two other varieties in 1839 is relatively small and can be found in the shape of the head of Liberty and her hair curls. It is still an interesting coin, and $100 will buy a nice problem-free VF. Look for coins that have lots of detail in the hair and in the wreath on the reverse, and you will have bought yourself a quality coin that provides good value.

Spend a Little More: Instead of spending more on a single coin, I would suggest you look for the other two major varieties of this year, the Head of 1838 and the Booby Head. Both can be found for about $100 in VF (the Head of 1838 is the easiest, while the Booby Head will be a bit more difficult). Together with an earlier Coronet Head cent and a later Braided Hair cent they will make for a very interesting display of the transition that the denomination went through in the late 1830s. 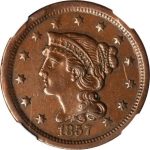 All good things must come to an end, and the Flying Eagle cent replaced the large cent in 1857. This did not happen, however, until later in the year, and the Philadelphia Mint struck 333,456 large cents that year before switching to the much smaller type. These come in two distinct varieties, identified by the size of the date, but both are considered scarce coins and are not as easy to find as some earlier large cents. The American public went into total collecting-frenzy mode as the large cent disappeared from circulation, and tried to hold on to as many large cents as they could, and it can be presumed that quite a few large cents dated 1857 were among those. The relatively low mintage, however, means that this is still a scarcer coin, with Small dates a little bit more available than Large dates (although the difference is slight). Either way, a nice Fine of this date can be purchased for $100 or so, although it will require some searching, as few coins wore down to that level.

Spend a Little More: This is an issue where it is actually easier to spend more money, as higher-graded coins are more common than those in lower grades. Small Date examples in VF will cost about $150, while EF’s will set you back about $250; both of these are excellent purchases to a collector wishing to add a higher-graded large cent to a collection. It appears that at auctions Large Dates will sell for about 10% more than those prices, but with some searching and some luck a collector might be able to add a Large Date to a collection for a little bit less. ❒

Interested in learning more about large cents? Take a look at the Guide Book of Half Cents and Large Cents, by Q. David Bowers.
Share: