Colonial American coins are somewhat of a misnomer in the field of numismatics. While many of them were indeed struck before the United States declared independence from Great Britain, others were made afterward, yet are still classified as colonial coins. This might seem a bit confusing, but generally speaking (however, even here, there are exceptions to the rule) colonial American coins are those that were struck prior to the establishment of a Federal Mint in Philadelphia in 1793. As many coin collectors know many colonial coins are of the highest rarity and sell for high prices whenever they come up for sale, but as we will see in this article even collectors with a $100 budget should be able to add some colonial pieces to their collection, although they will be of lower grade, and may have some problems.

Struck before the declaration of independence in Great Britain for circulation in Virginia, the Virginia coinage of 1773 are included among the number of the more available colonial coins. A true colonial coin, these were aptly shipped on the British ship Virginia and arrived in Virginia in early 1774. The obverse features the bust of King George III of England, while the reverse shows the coat of arms of the House of Hanover. These circulated extensively, perhaps even well after the War of Independence had ended, and today there is a large supply of coins in all grades available. $100 will get you a nice Fine and a coin that definitely circulated in the 18th century.

Spend a little more: A large hoard of Uncirculated Virginia Halfpennies came to the market out of Baltimore in the second half of the 18th century, and today this is the most common colonial coin in Uncirculated condition (some sources say that the original hoard contained as many as 5,000 pieces). Still popular, Uncirculated pieces sell for about $800, and if you spend some time searching, you should be able to find a nice EF for about $350.

Part of a series of coins struck by various states in copper and circulating as a halfpenny, Connecticut coppers were struck from 1785 to 1788. Modeled after the contemporary British halfpenny at the time, the obverse features a man’s head, while the reverse features a crude depiction of Liberty. Struck from a large number of different dies, some collectors avidly collect the series by varieties, some of which are very rare. Luckily, others are more available, and a few can certainly be found in lower grades (say Good or Very Good) for less than $100. More common varieties include the 1785 with Mailed Bust Right, 1786 with Mailed Bust Left, and 1787 with Draped Bust Right.

Spend a little more: Most colonial coppers are notoriously difficult to find in higher grades, as they circulated extensively throughout the Northeast. The key is to look for problem-free coins, with no corrosion and good eye-appeal. Keep in mind that quality was not important when these were struck, and even high-grade examples can look very crude. With a lot of luck and some searching, you might be able to find a decent EF with ok-ish eye-appeal for about $250, but those coins are few and far between, regardless of variety. 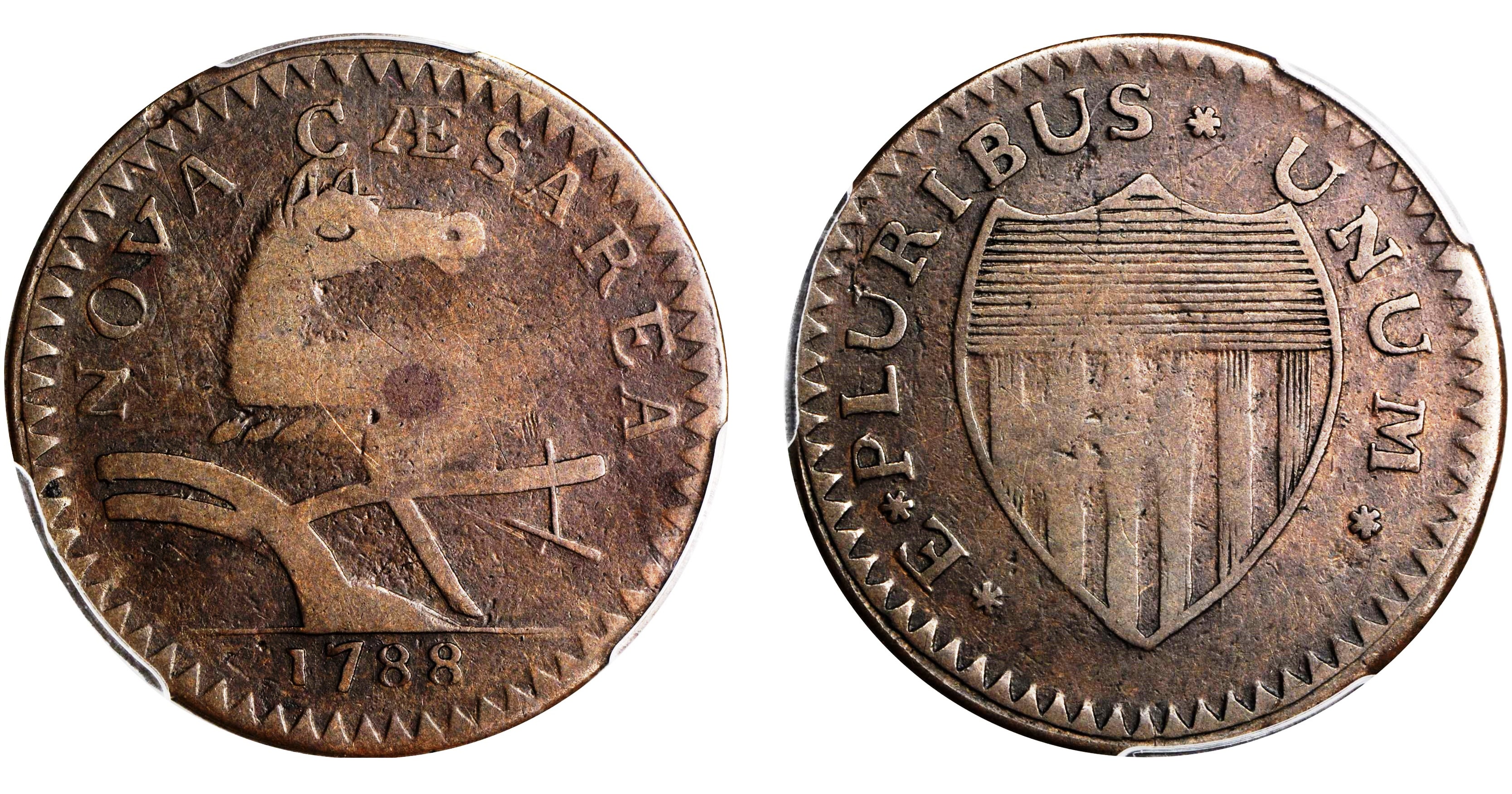 New Jersey also struck copper coins to the standard of the British halfpenny, but unlike the Connecticut Coppers, the design is entirely different. Struck from 1786 to 1788, the obverse features a horse’s head and a plow (based on the state’s coat of arms). The reverse features a shield and E Pluribus Unum, the National motto that means “Out of Many One,” and would appear on Federal coins as well (New Jersey Coppers were the first to have this motto). New Jersey Coppers tend to be better struck than other Colonial Copper series, and certain varieties do tend to come in nicer grades. Much like the Connecticut Copper series, certain varieties are very rare, and this series also has a very dedicated collector following. For a common variety, like the 1787, expect to find a darker Good or Very Good, but a coin that should be instantly recognizable.

Spend a little more: There are some interesting varieties in this series, not all of which are rare. Two interesting varieties that might be worth stepping up for is the 1787 with the so-called “Serpent Head,” where the head of the horse looks more like that of a serpent, and the “Camel Head,” where the head, as you may have guessed, looks like that of a camel instead of a horse. Both varieties can be found attributed for about $300 in lower grades (perhaps with corrosion), but of course it is always more fun to find it unattributed in a dealer’s inventory (something known in numismatic circles as “Cherry-Picking”).

Another state that struck its own copper coins was Massachusetts, but unlike Connecticut and New Jersey, which contracted the minting out to private companies, Massachusetts established its own mint, wherein 1787 and 1788 half cents and cents were struck. The obverse featured a standing Native American surrounded by the word COMMONWEALTH, while the reverse features an American eagle with its wings spread and the state’s name surrounding it. The denomination can be found on the eagle’s breast. While this series is not as popular to collect by variety as some of the other states, certain varieties remain rare and command high premiums. For a collector on a budget, however, some remain relatively available, and a lower grade 1788 Half Cent with some corrosion can be found for right around $100.

Spend a little more: While you can certainly improve in grade a collector on a budget wishing to spend a bit more can also opt for one of the larger cents. A good option would be the 1788 cent. These are not all that much more expensive than the half cents. A nice Fine can be found for about $250 to $300 and makes for a good representative of this colonial type.

Even though this piece was struck at the Paris Mint for circulation in the West Indies, these pieces are still often included in the American Colonial series, as some certainly made their way over to what is now the United States, particularly in Louisiana. Most pieces are counterstamped RF (apparently this only occurred in the 1790s), while the non-counterstamped pieces are scarce and more in demand as they are more closely related to Louisiana. Approximately 1.6 million pieces were struck so it should come as no surprise that this is one of the more available colonial-era coins. Expect to find a decent Fine of the counterstamped variety for right around $100. This is perhaps the least relevant coin discussed in this article, but once you are aware of its history, it still is an interesting and relatively affordable example of a colonial-era coin with a (somewhat loose) link to American history.

Spend a little more: Part of an earlier series, the 1721-H and 1722-H Sou or nine-deniers were struck at the La Rochelle Mint in France in large quantities and circulated extensively in colonial America. These are considered more closely related to the American colonial series and are also more difficult to find and more costly. For a decently looking VG or Fine expect to spend just a little bit over our budget, and more in higher grades.