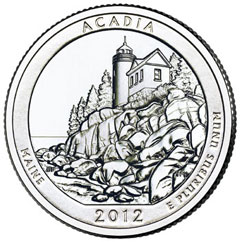 The United States Mint and National Park Service will host a launch ceremony for the Acadia National Park Quarter on June 26, 2012. The ceremony will take place on the grounds of the park and will include a coin exchange event where members of the public will have the opportunity to exchange currency for rolls of the new quarters.

The Acadia Quarters were first released on June 11, 2012. This was the official circulation release date and also when the United States Mint began sales of numismatic bags and rolls containing circulating quality examples of the coins from the Philadelphia and Denver Mints. The reverse design of the quarter includes a view of the Bass Harbor Head Light House, which incorporates representative elements of the park including the lighthouse, the coastline, pine trees, and the ocean.

The event will be attended by B.B. Craig, Associate Director of Sales and Marketing for the United States Mint; Sheridan Steele, the Superintendent of Acadia National Park; Timothy Harrison, the founder of the American Lighthouse Foundation; and Bill Green, the host of WCSH-TV’s “Bill Green’s Maine”.

The evening before the ceremony on June 25 at 6:30 PM MT, the United States Mint will host a coin forum at the Hulls Cove Visitor Center Auditorium. This will provide an opportunity for the public to learn about upcoming coin programs and initiatives and express their views on future coinage.