The 2012-P Acadia National Park Five Ounce Silver Uncirculated Coin is now available for sale at the United States Mint. This represents the numismatic version within the five ounce silver coin series which features the designs of the America the Beautiful Quarters. 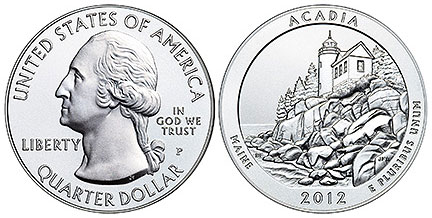 The reverse design of the coin incorporates elements representative of Acadia: the ocean, the coastline, a lighthouse, and pine trees. These are presented through a depiction of the Bass Harbor Head Lighthouse, which is located along the coastline. Inscriptions include “Acadia”, “Maine”, “2012”, and “E Pluribus Unum”. The obverse of the coin features the 1932 portrait of George Washington prepared by John Flanagan. Inscriptions include “United States of America”, “Liberty”, “In God We Trust”, and the nominal face value of “Quarter Dollar”. An incuse edge inscription indicates the precious metal weight and fineness of “.999 Fine Silver 5.0 Ounce”.

As the numismatic version of the coin, the “P” mint mark is included representing the Philadelphia Mint. The coins also carry an uncirculated finish created through a vapor blasting technique. The bullion version of the coin, which was released late last month does not contain a mint mark and carries a brilliant finish.

The Acadia National Park Five Ounce Silver Coins have a stated maximum mintage of 25,000 pieces. The coins are initially priced at $204.95 each and no household ordering limits are imposed.