Acadia National Park, comprised of several islands off the coast of Maine, was originally inhabited by the Wabanaki people. The idea for the park has been credited to landscape architect Charles Elliot, and it first attained federal status as Sieur de Monts National Monument on July 8, 1916. It became Lafayette National Park on February 26, 1919, honoring the Marquis de Lafayette, an influential French supporter of the American Revolution, and obtained its current name on January 19, 1929. 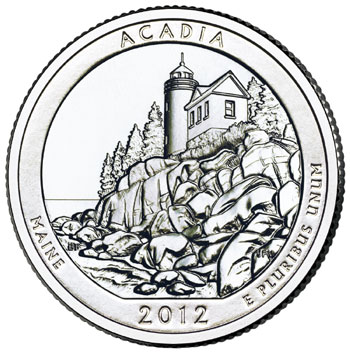 The Acadia National Park Quarter depicts elements representative of Acadia: the ocean, the coastline, a lighthouse, and pine trees. These are presented through a depiction of the Bass Harbor Head Lighthouse, located along the coastline. Also included in the design are the incused phrases “Acadia”, “Maine”, and “E Pluribus Unum”, as well as the date of issue. The coin will represent the third issue of the United States Mint’s America the Beautiful Quarters Program for 2012, and the thirteenth issue for the series overall.

The Acadia National Park Quarter will be available from the U.S. Mint in the following products: