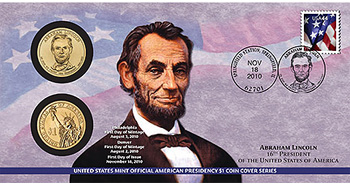 Each cover includes two Abraham Lincoln Presidential Dollars from the first day of production. This was August 3, 2010 for the Philadelphia Mint and August 2, 2010 for the Denver Mint. Both coins are mounted on an envelope illustrated with a portrait of the 16th President that has been stamped and canceled on the first day of circulation release. The postmark is “November 18, 2010, Springfield, IL“.

The Abraham Lincoln $1 Coin Covers are priced at $15.95 each, with no household ordering limits imposed. Overall, there is a maximum production limit of 37,000 units. This represents an increase from the prior cover, due to anticipated higher demand for this release.

This represents the final numismatic product release of the year from the United States Mint.