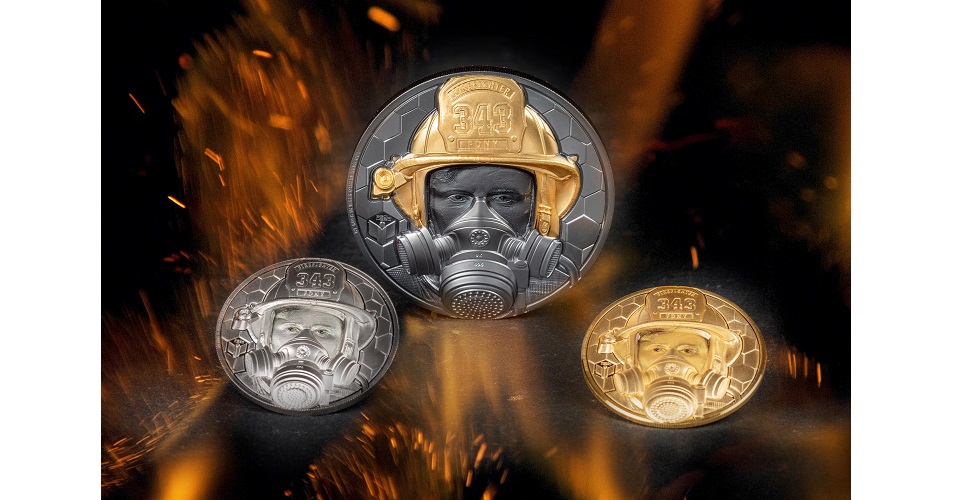 At the beginning of this year, CIT Coin Invest released after the 2020 “Fighter Pilot” the second issue of its “Real Heroes” series. Honoring the heroes of 11 September 2001, a tragedy that happened exactly 20 years ago, this issue is dedicated to firefighters around the globe. A few days after its release, “Firefighter” was already oversubscribed multiple times. It is to be expected that the newly released premium editions will also be sold out quickly. 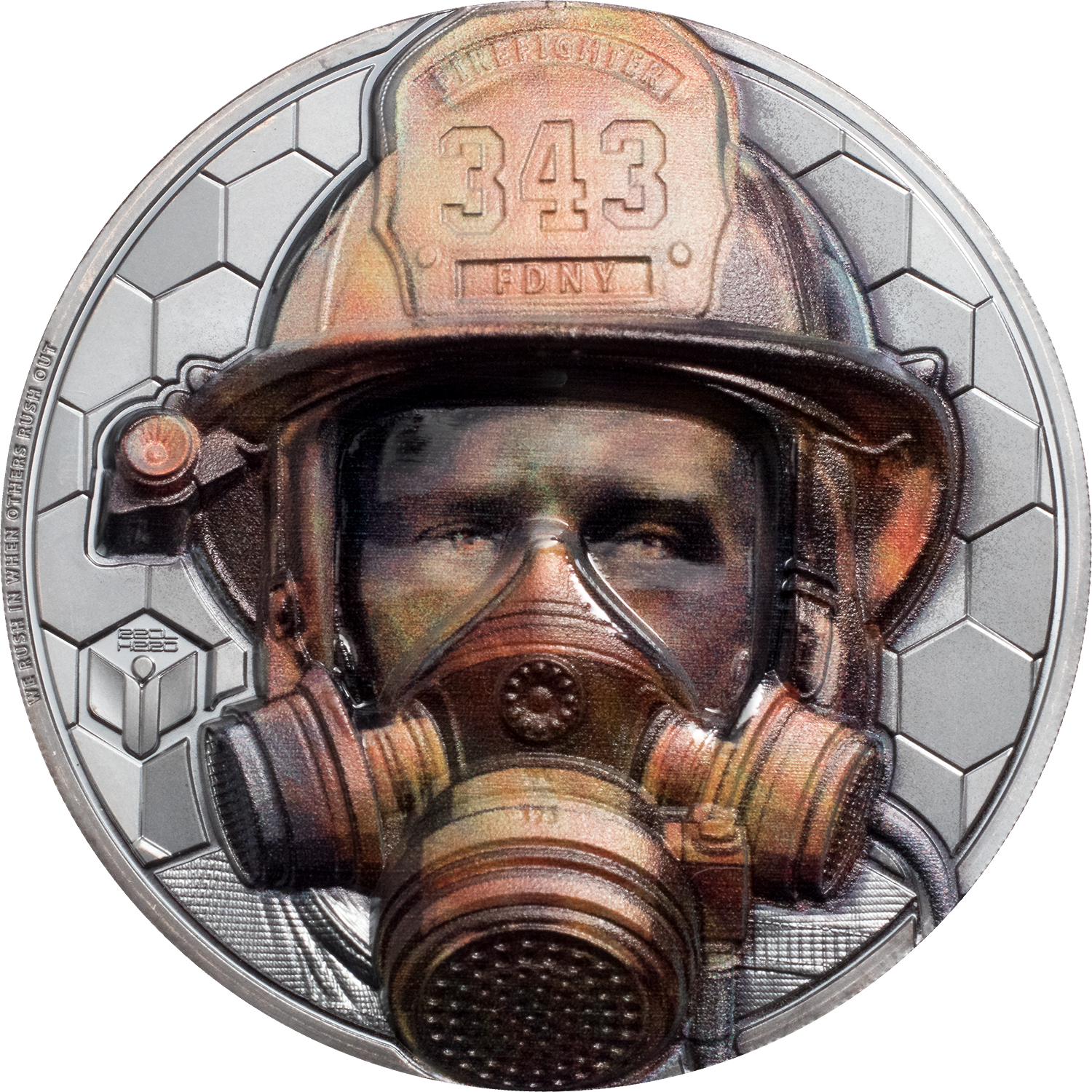 Firefighter with breathing mask and helmet in front of a honeycomb pattern; in the left-field is REAL / HERO as micro inscription, below a stylized guardian angel; on the edge the incuse inscription is WE RUSH IN WHEN OTHERS RUSH OUT. 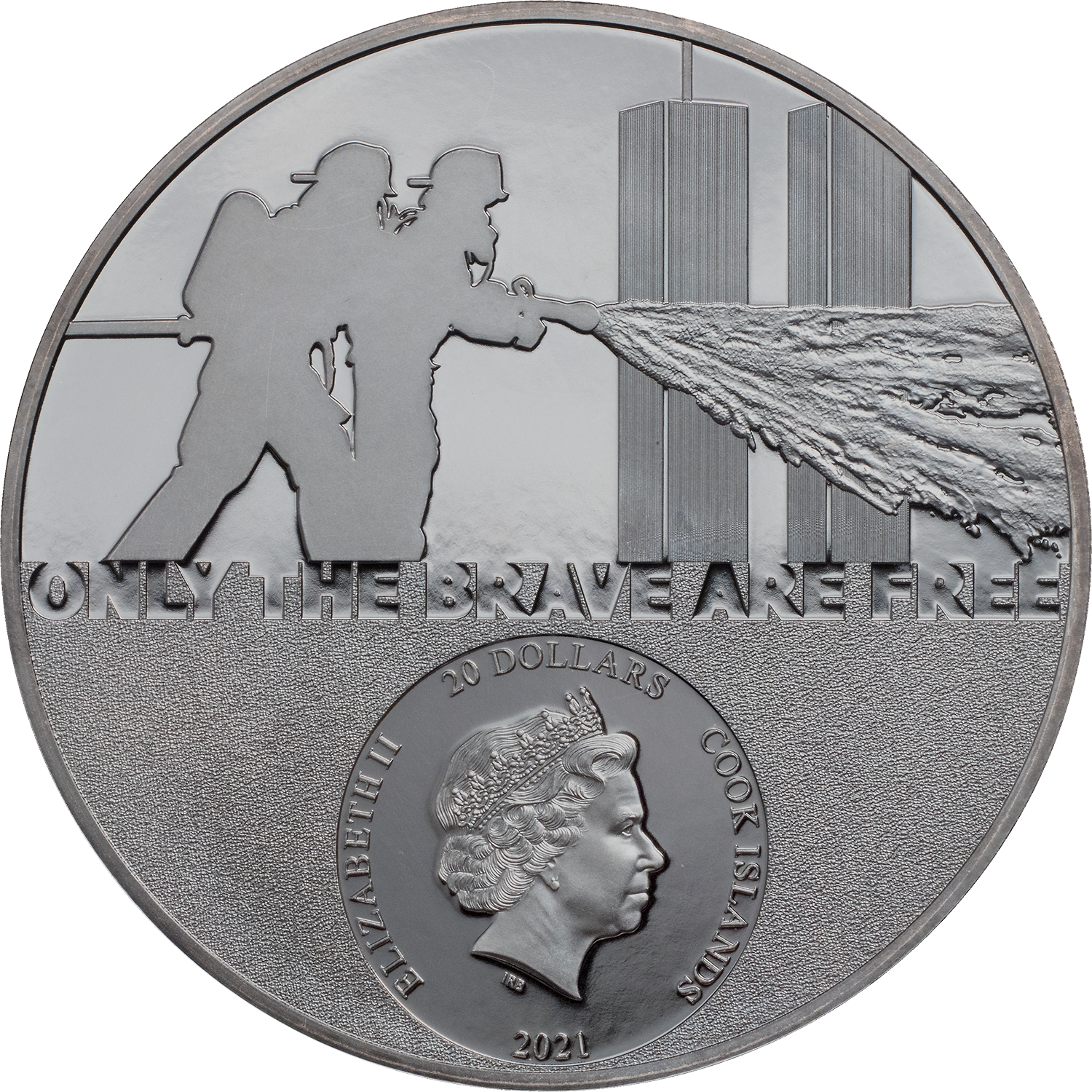 The other side features the silhouettes of two firefighters in gear, holding a fire hose to fight the fire, and behind them is the silhouette of the Twin Towers; below is the portrait of Queen Elizabeth II by Ian Rank Broadley (initials IRB); around it ELIZABETH II – (Denomination) – COOK ISLANDS – 2021.

The Silver Edition in Black Proof

Even the original coin was a triumph of minting technology: Several sophisticated and complex technologies were combined to produce this piece. Anyone familiar with minting technology will immediately see that the ultra-high relief could only be produced thanks to the smartminting technology developed on behalf of CIT by B. H. Mayer in Munich. Besides smartminting, micro minting was applied. This technique was not only used for the micro inscription WE RUSH IN WHEN OTHERS RUSH OUT, but also for the fabric of the firefighter’s special suit.

Firefighter was minted in Proof quality. This means that both die and every blank were given an elaborate treatment prior to minting the coins. This process brings out the different finishes in a unique way. You can see this on the reverse of the piece: The motif comes alive thanks to subtle differences in the frosting.

The dark toning of the coin was achieved by a special finish known as Black Proof. The areas where color printing was applied were omitted. Actually, color printing is a rather common technique. But mastering it on an ultra-high relief coin is a true sensation.

We should also mention the varnish over the face of the firefighter, which imitates a visor. Applying it was one of many steps that were necessary to make Firefighter a marvel of minting technology. 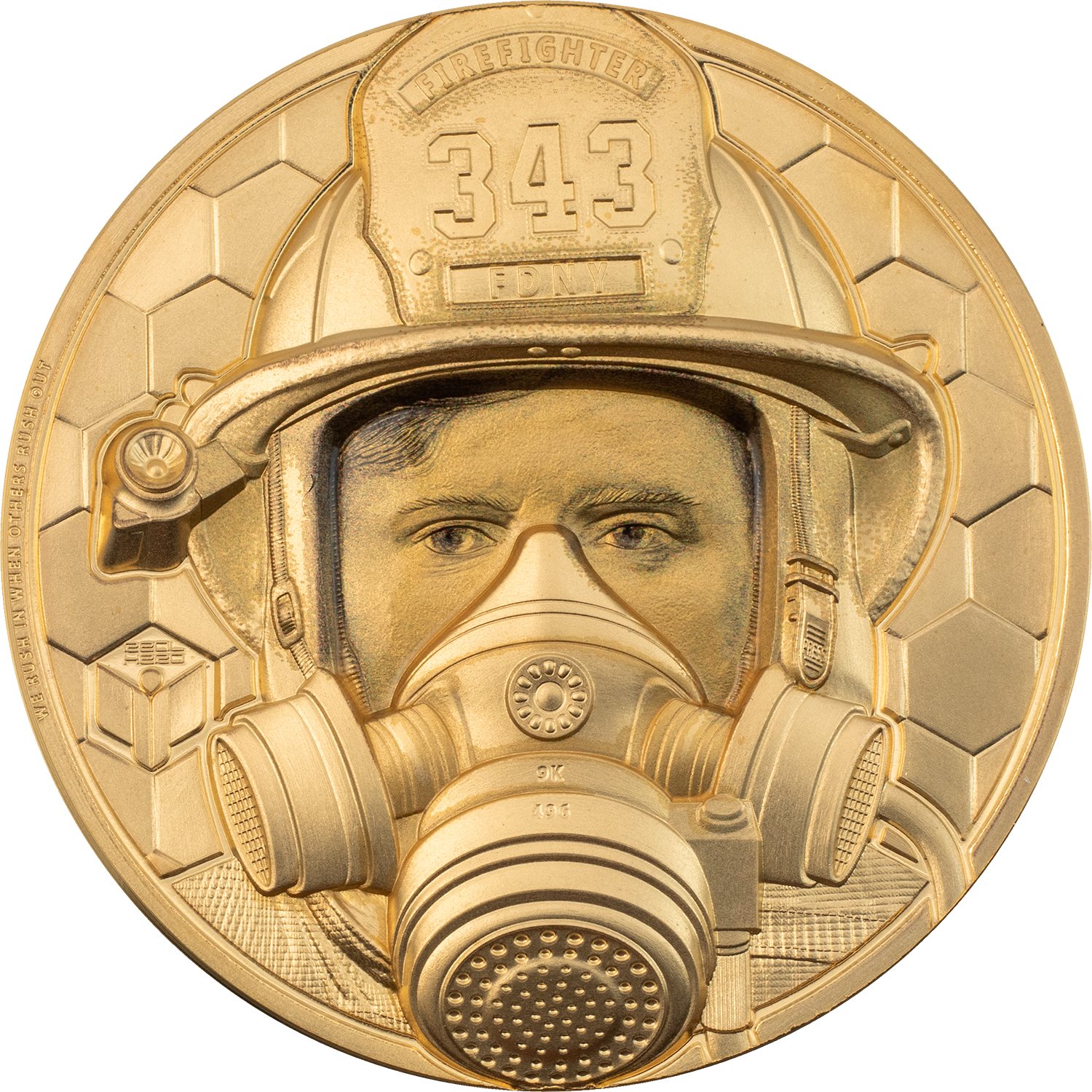 The 2020 “Fighter Pilot” in gold showed that it is possible to do an ultra-high relief issue on a one-ounce gold blank, although the mass of the gold blank was much smaller than the mass of the silver version featuring three ounces. This was possible due to the physical properties of gold, which is the metal that is the easiest to shape in a minting process.

But the key to a stunning coin is the combination of several techniques. Proof quality with an elaborate frosting and delicate color application with a varnish that makes the Firefighter come alive. 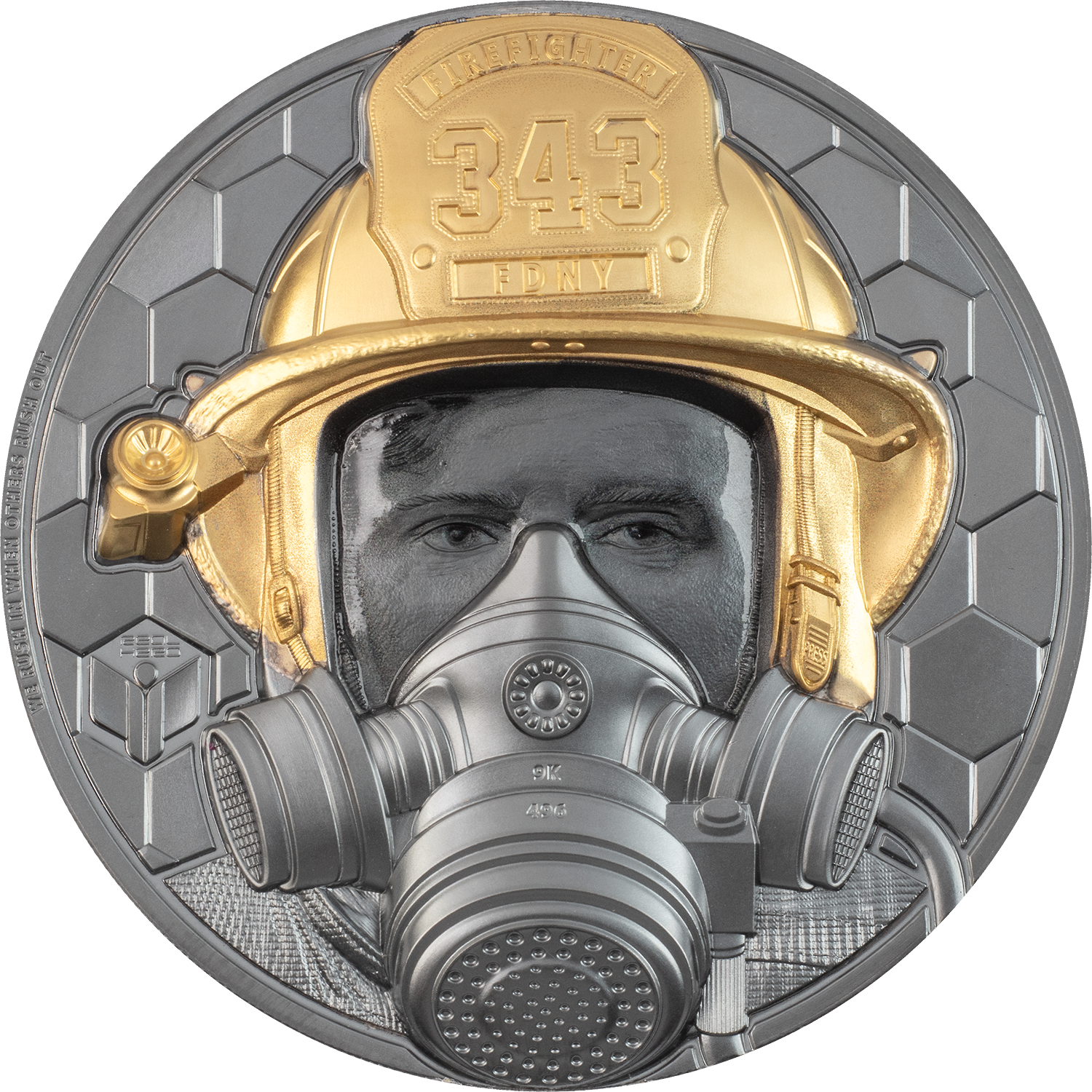 Only 29 specimens of the five-ounce gold version with Black Proof finish will be minted. Some raised areas on both sides were left untouched, creating an impressive effect. The two-tone appearance of the coin was manufactured in an elaborate and precise work process. 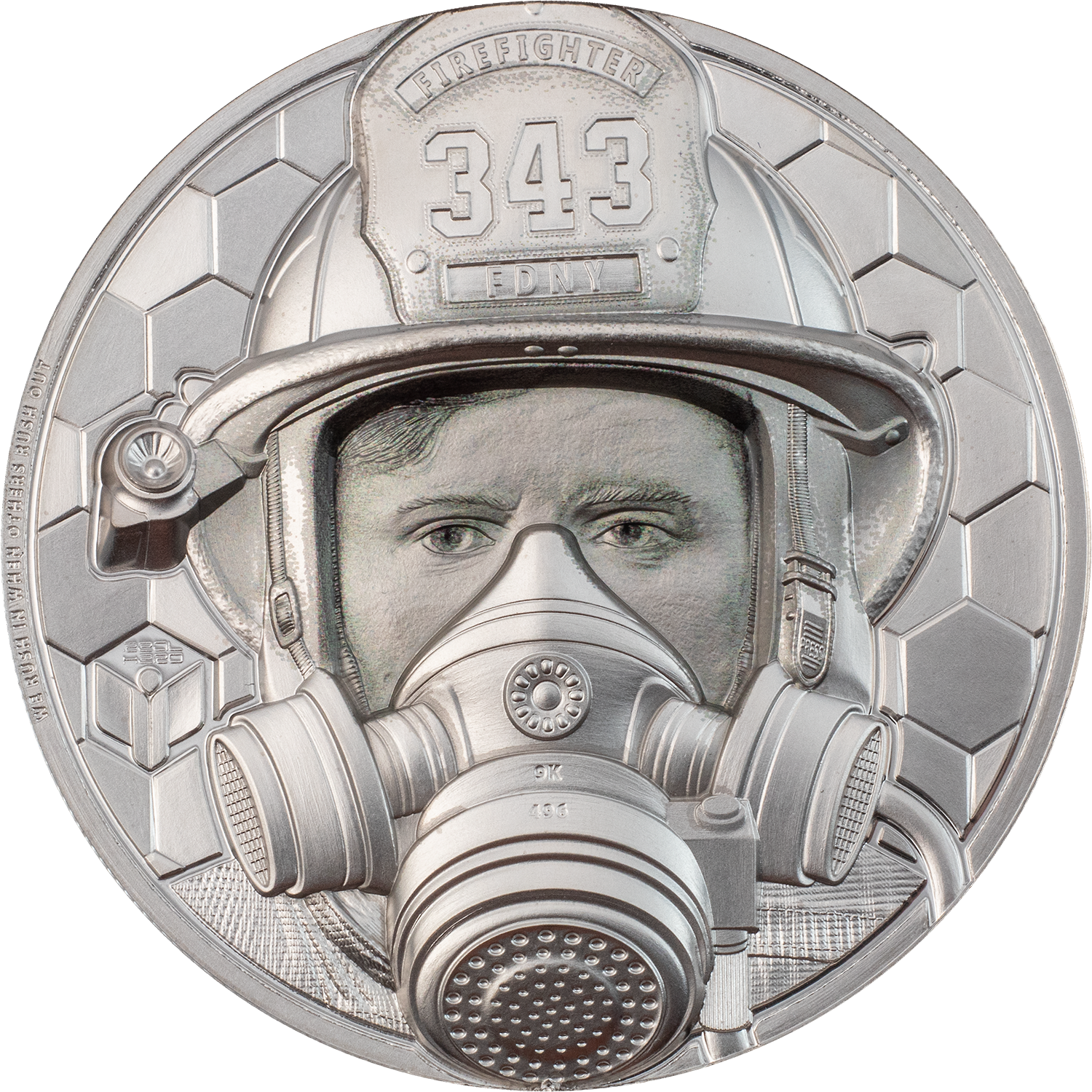 When the Russian Mint struck the world’s first platinum coins for Tsar Nicholas I in 1830, his workers and engineers must have cursed quite a lot. It took them more than two years to somewhat master the technical requirements of the new material. The high melting point of Platinum of 1,768 degrees Celsius was not the only think they struggled with. The main problem was how hard and brittle the material was.

To this day, platinum is known for wearing out way more dies during the minting process than any other metal. Its poor flow qualities prevent minting engineers usually from achieving an attractive relief. Nevertheless, the platinum version of Firefighter is proof that this can be done. This coin shows a higher relief than any previous platinum coin had. Firefighter and its relief raised the bar for future platinum coins.

All issues were produced by B. H. Mayer’s Kunstprägeanstalt, Munich.

If you want to experience all three dimensions of this coin, you have to watch these films.

This film shows the silver version of the Firefighter:

And this film shows the new premium editions: