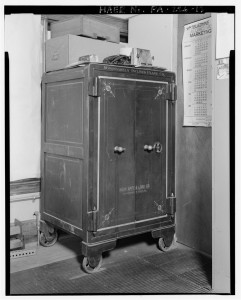 The Wall Street Journal has reported on a surprising trend in Germany and elsewhere: faced with negative interest rates in the eurozone, banks are beginning to charge interest on deposits. And their customers are beginning to withdraw their cash from the banks and take it home.

Of course, they’re not exactly stashing it out back in a coffee can, like some eccentric neighbor who still uses a rotary phone and hides canned goods under the bed. They’re putting their euro—tens of thousands of euro—in heavy-duty steel safes. Sales for European safe manufacturers, the Journal notes, are up by as much as 25%, and many are operating at capacity to meet the demand.

What does that mean for the United States? Probably not much, as the Fed is unlikely to wade into negative-interest-rate waters. Moreover, the typical American attitude toward money is very different from that of the Germans, whose preference for hard cash and loathing of debt are famous. To a German, getting a mortgage is an evil to be avoided; to an American, it’s a right of passage.

Many Americans even hope for for a cashless (or at least, a less-cash) society—and that’s not just a Millennial phenomenon. Ed Moy, former director of the U.S. Mint, is a proponent of BitCoin and other cryptocurrencies; and Kenneth Rogoff, former chief economist for the IMF, suggests in The Curse of Cash that, at a minimum, large-denomination paper bills should be abolished.

Americans are unlikely to see either negative interest rates or an abolition of cash in the foreseeable future. But if we do, we may find ourselves wryly recalling the adage about “selling pickaxes to miners”—or rather, investing in the makers of home safes.
Share: