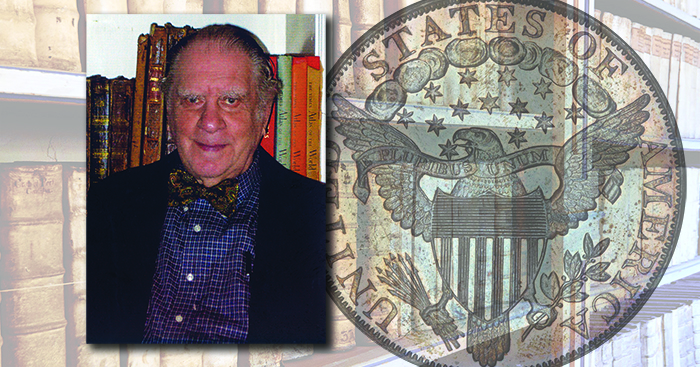 When I started working at Whitman Publishing in 2004, Eric P. Newman was already long established in many fields, including numismatics. He was in his early 90s at the time and going strong.

My first communication with Mr. Newman started in 2005, after he read an early draft of Q. David Bowers’s manuscript for what would become the Guide Book of Shield and Liberty Head Nickels. To say that his comments, edits, and recommendations were sharp would be an understatement. They were razor-sharp, gently but firmly communicated, full of wit, precision, and clarity. “Authoritative” is the word. He pointed out statements that were conjectural. He advised where clarification was needed. He corrected seemingly minute but actually significant errors of fact. He offered changes in wording to make the already strong text even stronger.

At the time Dave’s ~150-page manuscript was just one of several that Mr. Newman was editing for other researchers. “Keep writing and keep numismatics hopping,” he told his longtime friend. Who else but Eric P. Newman could advise Dave Bowers thus!

In December of that year Mr. Newman emailed Dave and several Whitman associates to clarify the dates of the Massachusetts colonial paper-money issues of 1690 and 1691—a complex subject that he explained with his usual authority and clarity. (His explanation would be folded into the manuscript for 100 Greatest American Currency Notes.) In this email, the elder statesman of numismatics illustrated his modesty and his approachable manner, inviting further questions and saying goodbye as “Eric to some of you and, for a little while, Eric P. Newman to the rest.”

It wasn’t long before he was signing off as just “Eric” in his personal correspondence to me. Why do I now refer to him as “Mr. Newman”? I need to work on that! He was always friendly and welcoming, and would undoubtedly laugh at the formality.

Dave Bowers emailed me privately: “Can you please hire Eric P. Newman on your editorial staff? I highly recommend him. He has only made one error in his life, and that was on January 9, 1954, when he apologized for making an error, and later found out that he hadn’t made one.”

In 2006, Mr. Newman wrote the foreword to Q. David Bowers’s Obsolete Paper Money Issued by Banks in the United States, 1782–1866. He described his long friendship (of 50-plus years) with Dave, and he told how he became interested in early American money. He recalled his intellectual spark of some 80 years earlier, and how his curiosity gave no preference to metal or paper, or when a particular piece of money circulated. Everything numismatic was fair game for young Eric Newman’s insatiable interest.

Mr. Newman was, like Dave Bowers, Ken Bressett, and other witty numismatists, always looking for humor in the hobby. In October 2007 he sent an email suggesting a new book: “The intense interest in collecting, buying, and selling fake and fantasy coins, bars, medals, and paper money has increased substantially lately, and perhaps a Guide Book of Fake American Numismatic Collectibles should be prepared, with current values. The preface should caution readers that you will promptly delist items if, after research, they turn out to be genuine. You probably should keep the names of the fakers secret so as not to discourage further production.  You might call the publication ‘The Green Book’ to appeal to simply green collectors, and might include a dedication to Hetty Green. You could even rank the false pieces under a ‘100 Best Fakes’ section. You should not list legitimate circulating counterfeits, as that may be opposed by Federal, Lebanese, or North Korean authorities. You could caution readers that values of fakes may exceed the value of genuine pieces. You could use a condition scale based upon 143 instead of the existing confusing scale of 70. Many pseudo-scholars will be glad to assist you in this encouraging endeavor. You could prevent other publishers from making replicas of the Green Book under the non-intellectual property laws. A former popular specialized numismatic literature publication, Struck Copies of Early American Coins, by Richard D. Kenney, was published in 1952 and this was only a small pamphlet. Featuring reproductions would not interfere with stem cell research.” He signed off, “I am Green with envy.”

While his humor was fun and light-hearted, Mr. Newman’s scholarship always bore weight. In 2007 he offered important suggestions on the structure of Dave Bowers’s in-the-works Whitman Encyclopedia of Colonial and Early American Coins. He was a substantial guiding force in the book’s development, even from afar. Dave ended up dedicating the monumental book “to Eric P. Newman and his lifetime devotion to early American numismatics.”

In 2008 we started talking about crafting a new edition of a hobby classic, The Fantastic 1804 Dollar. Mr. Newman and Kenneth Bressett began working on that book in 1959. Ken was already known as a serious numismatist, though he wasn’t yet identified as “Mr. Red Book” (that title, at that time, was for R.S. Yeoman). The Fantastic 1804 Dollar was finally released in 1962, and the dramatic circumstances of its publication are the stuff of hobby legend. With the 50th anniversary of the start of their collaboration approaching, and with 1804 dollars constantly in the news, I wanted to create a new edition for today’s hobby community. It was an honor to work with Newman and Bressett on the “Tribute Edition” Whitman published in 2009, marking the 50th anniversary of the start of their writing on these famous coins.

More Newman humor: referring to his author portrait for the Tribute Edition, he told me, “I will mail you a color mug shot. I can try to grow a beard if that would be more impressive.” Regarding signed bookplates for a special limited-edition run of the book, he said, “I have two wrists so that if one gets tired autographing the other can take over. Then there will be two varieties of signature from me.”

Mr. Newman may have started his numismatic studies in the 1930s, but he was comfortable in the new century and took good advantage of its technology. In 2008 Dave Bowers recommended that he get a new kind of scanner for quickly capturing high-resolution images of coins and paper money. This opened a floodgate! We were working on manuscripts on half cents and large cents, among others, at the time. “Thank you for making me find, examine, and enjoy some of my collection,” Newman wrote to Dave. Months later Dave was astonished by the steady stream of scanned banknotes and coins coming in from St. Louis, Missouri. He marveled: “I guess Eric P. Newman (age 97) is learning about the latest technology!” Of course, by this time he had been using the Internet for years, for communication and research.

Other correspondence over the years came from Newman’s membership in the Rittenhouse Society, a forum of numismatic researchers, named after the first director of the United States Mint. The society was started by Dave Bowers, Ken Bressett, Kenneth Rendell, Walter Breen, George Fuld, and other dedicated young numismatists around 1957. Their original idea was to limit membership to writers under the age of 30—but Eric Newman, born in 1911, would have been ineligible. The age requirement was dropped. In recent years Mr. Newman has corresponded by email, congratulating and welcoming new members and weighing in on Rittenhouse Society news.

Today Eric Newman may be gone, but he remains an active force in the hobby, art, and science of numismatics through the continuing work of his foundations, including the Eric P. Newman Numismatic Education Society (and its groundbreaking Newman Numismatic Portal), and of course through his voluminous published works, and the benchmarks he set for other researchers.

The great writer, who always considered himself a student, also kept up to date with Whitman’s publications. It was my honor to send him a copy of every new book as it was published, for his library. He read them all, and continued to take interest of all aspects of the field, as he did when he started in numismatics as a youth. “Keep producing books galore,” he once told me. And more advice to Dave Bowers: “Don’t stop writing. Don’t retire. And keep your mind churning, as always.”

I encourage every numismatist reading these words to continue Eric Newman’s legacy by taking that advice to heart.