On December 1st, Gadoury will be holding its yearly auction in Monaco, getting the numismatic advent season off to a spectacular start. This year’s offerings are a traditional collector’s dream come true – numismatic rarities of great historical significance at prices that are well within reach.

There are 717 lots coming up for auction on December 1st at 2:00 pm at the Hotel Fairmont / Monaco. And as stunning as the location right on the marina may be, don’t let it distract you from the treasures that lie within – Gadoury’s auction catalogue has something for everyone, appealing to both investors and traditional collectors alike. Some of the coins in this auction were not compiled exclusively by condition, and the resulting assemblage proves a delightful contrast to the streamlined, glossy catalogues so common today that always feature the same well-known, extremely fine coins. Why not take a look for yourself?

Following a few Greek and Celtic coins, there’s an extensive collection of about 400 Roman coins that truly offers something for every aficionado of this field. Among them are numerous very fine and extremely fine aureii at very reasonable estimates, pristine bronze coins of superb toning, rare emperors and their even more rare relatives and imperial and provincial coinage, all of them appealingly preserved and also featuring many rarities and many historically interesting reverses.

The selection of imperatorial coins is particularly noteworthy, featuring such stunners as a rare denarius of Cassius with the tripod on the obverse (22 / FDC / Estimate: 3,300 EUR), an extremely rare bronze coin featuring the portraits of the participants of the second triumvirate from Ephesus (23 / very fine / Estimate: 1,000 EUR) and a denarius of Marcus Antonius with the (exceptionally good) portrait of his brother Lucius Antonius on the reverse (26 / nearly extremely fine / Estimate: 3,800 EUR). 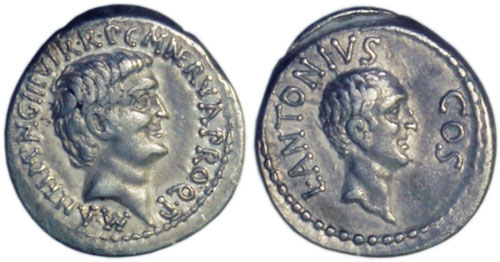 Looking at every piece in this section, you can really understand that the collector’s primary concern was that of attaining completeness of the imperial families. To highlight a few examples, today’s connoisseur has the chance to discover such gems as an extremely rare bronze from Pergamum depicting the portraits of Livia and of the daughter of Augustus, (55 / very fine / Estimate: 1,500 EUR), three bronzes of the third wife of Claudius, Valeria Messalina, and two bronzes of the significantly lesser-known third wife of Nero, Statilia Messalina, as well as two bronze coins of the third wife of Elagabalus, Annia Faustina, whose portrait you barely will find in auction catalogues. With such impressive pieces, it’s almost a given that the ensemble would also feature a very fine hemidrachm from Alexandria in honour of Antinoos (220 / very fine / Estimate: 4,200 EUR).

It’s not just the Roman coins that dazzle however – there are also delightful surprises to be had among the small number of coins from both the Byzantine Empire and the Migration Period. Take, for example, an extremely rare tremissis of the Lombard Desiderius, father-in-law of Charles the Great and Tassilo III of Bavaria, who, through his clumsy politics, prompted Charles to invade Italy to support the pope and annihilate the Lombards (432 / extremely fine/FDC / Estimate: 17,000 EUR).

The third part of the auction comprises coins from all over the world, from Afghanistan to the USA, and there are interesting sections to be found here too, in some of the offerings from France, Italy and Russia. Many interesting individual pieces also bear mentioning, such as a 20,000 reis from Brazil (552 / extremely fine / Estimate: 6,000 EUR) or an extremely rare, unnumbered sovereign of the British Queen Victoria from 1863, with 827 below the bust (623 / very fine / Estimate: 6,000 EUR).