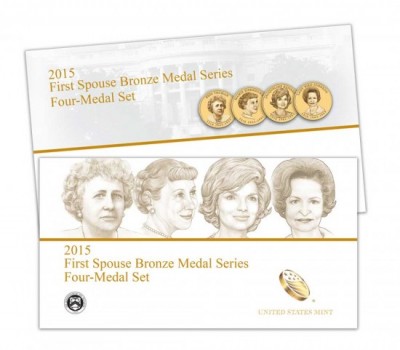 As we gear up for tomorrow’s weekly sales report, it’s a good time time to look back at the U.S. Mint’s busy week and consider the products it’s released in the last seven days. At the time of this writing, none of the these items have sold out, though the 2015 John F. Kennedy Coin & Chronicles Set, with its exclusive Reverse Proof Presidential dollar and silver medal, is getting very close.

The Kennedy Coin & Chronicles Set was a much-hyped release, anticipated for both its contents and its position as a follow-up to the brief and exasperating debuts of its predecessors, the Harry S. Truman and Dwight D. Eisenhower Coin & Chronicles Sets. The Truman and Eisenhower sets sold most of their 17,000-set allotment within 15 minutes of their releases, prompting to the mint to bump the Kennedy set’s mintage limit from a relatively high 25,000 units to an even larger 50,000.

Prior to the set’s release, a Coin Update poll on the increased mintage limit showed that the largest percentage of voters felt the mint had gone too far by offering 50,000 of the Kennedy C&C issue. And since the set is still available a week after its release, they may have been right, especially for those who hoped high demand would mean a significant and timely appreciation of the sets’ value, as we’ve seen for the Truman and Eisenhower releases.

From the mint’s perspective, however, they may have hit an ideal mark. The set sold 40,000 units in its first hour and 45,613 its first day. There has been enough inventory for serious collectors and flippers, with some time to spare for the casual buyer. Yet the set won’t languish for months on the mint’s Web site, waiting for its inventory to be slowly depleted. The full sales report will be available tomorrow, but new figures show that the 2015 John F. Kennedy Coin & Chronicles Set sold 48,462 units as of Sunday. The mint’s product page for the item will read “Unavailable” or “Sold Out” any time now. 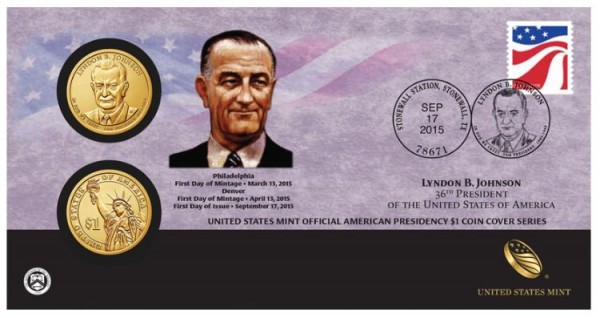 On Thursday, the day after the Kennedy Coin and Chronicles release, the U.S. Mint debuted the 2015 Lyndon B. Johnson $1 Coin Cover. This marked the fourth and final coin cover release for the year. These issues are notable for containing two “first day” Presidential dollars, meaning the coins were respectively manufactured on the first day of the design’s production at the Philadelphia and Denver mint facilities. Each coin cover costs $19.95.

The Johnson Coin Cover got off to a strong start as well. As of Sunday, the item had sold 10,287 of its 15,000-unit product limit. This is an especially good beginning considering no issue in this series has sold out since the 2010 Abraham Lincoln Coin Cover, which took over three years to exhaust its inventory.

Finally, the 2015 First Spouse Medal Series was released yesterday, September 21. The set includes bronze versions of the four First Spouse gold coins issued this year and is available for $16.95.

The medals, which celebrate the legacies of Bess Truman, Mamie Eisenhower, Jacqueline Kennedy, and Lady Bird Johnson, were first available separately as part of their respective Presidential Dollar and First Spouse Medal Sets. Here, they are grouped together for collectors of the First Spouse issues at a price more accessible than those of the Proof and Uncirculated gold coins.

We’ll have to wait until next week to see sales numbers for the new First Spouse Medal Series, but with a mintage limit of 20,000 sets, it will be interesting to see how long it sticks around.

For more information on any of these items, visit the U.S. Mint’s Web site.