There will be 5,350 lots amassing an overall estimate of 7.7 million euros going over the auction block at Künker between September 26-30, 2016. The offering ranges from antiquity to modern times, from pre-1871 Germany to overseas. Not counted are more than 300 orders and decorations, which will be auctioned off on the last day of the auction week. They can be considered a prelude to a large eLive Premium Auction, which will exclusively feature phaleristic specimens.

Auction 280: Coins from antiquity, amongst others, Roman coins from the Hannelore Scheiner Collection

The auction will kick off with around 1,000 coins from the ancient world: Celtic, Greek, Roman, and Byzantine coins, as well as specimens from the Migration Period and the Middle East. The connoisseurs of Greek coinage will be happy to see many rarities offered from this field. For example, how about an extremely fine Syracusan decadrachm from the hands of master engraver Kimon (estimate: 100,000 euros) or an extremely fine Siculo-Punic shekel displaying the flying Pegasus on its reverse (estimate: 75,000 euros)? Also to be offered are a few extremely rare pieces from the Thraco-Macedonian and Scythian regions. For example, an extremely rare gold stater from Chersonesos from 85 BC (estimate: 20,000 euros) or a double siglos of an unknown mint produced around 500, which past numismatists had wanted to place in Kalymna (estimate: 15,000 euros), and last but not least a very fine Alexander the Great decadrachm (estimate: 25,000 euros).

What surely may be called spectacular are the coins offered in the Roman Republic department. Just consider the extremely rare P. Cornelius Spinther denarius (Cr. 397/1) in the uncommonly good grade of almost extremely fine (estimate: 2,000 euros). Or take a look at the, in extremely fine even more rare, denarius by Numonius Vaala. Bernhard Woytek has identified the portrait on the obverse as belonging to Cassius Longinus, assassin of Caesar (estimate: 4,000 euros). From the same year a denarius by Servius Rufus is offered for sale, depicting, according to Woytek, Brutus, which makes a fitting addition to the piece just mentioned (estimate: 4,000 euros).

Together with the coins of the Roman Empire the Hannelore Scheiner Collection will be auctioned off, which was put together over many decades. It’s a traditional collection: interesting and partially very rare specimens of appealing quality – without the intent to strive for perfection. But since in the last years provenance has become more important than grades, it will be very interesting to see what the hammer price for a very fine Trajan aureus for Divus Titus will be, stemming from three world known collections: Ponton d’Amécourt, Imhoof-Blumer, and Jameson (estimate: 20,000 euros). 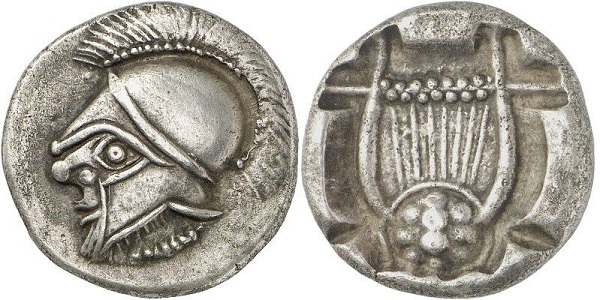 On the obverse, according to Bernhard Woytek, Arma et Nummi, Vienna (2003), pp. 433, C. Cassius Longinus, assassin of Caesar, is displayed.

September 27 will start with European coins and medals, including a comprehensive specialized collection which consists of coins and medals from the Vatican, spanning from the 13th to the 20th century. The collector very much paid attention to quality, which is why the specimens mostly are graded extremely fine and better. If you are missing gold coins in the collection, go ahead and check the gold catalog Künker 283, where these pieces are listed.

For collectors of Swedish coinage Künker has put together a nice series of about 130 lots. The earliest strikings derive from medieval times, the most current from the early 20th century.

As to be expected at Künker, the area of pre-1871 German coins and medals will be very interesting and diverse. Starting at A as in Aachen with an extremely rare, very fine denarius of Henry IV (estimate: 4,000 euros) going all the way to W as in Wuerttemberg with a 1625 double reichstalerklippe, made from the yield of the Christophstal mines. Furthermore, there are a number of rarities such as a 1574 Mark Brandenburg mining taler (estimate: 20,000 euros) or a Cologne mining taler of Clemens August of Bavaria, minted from Westphalian silver to commemorate the reopening of the Ramsbeck mines (estimate: 15,000 euros).

Finally, this part of the auction will conclude with 274 lots of post-1871 German coins.

Medals represent a very special field of collecting. There are hardly any comprehensive catalogs and there is surely no help to find out their rarity. It is really only personal taste and knowledge which are the most important factors when creating such a collection. And Luc Smolderen certainly possessed plenty of these abilities. The former President of the Académie Royale d’Archéologie de Belgique also shared his knowledge in many articles with other collectors. And now, pieces of his collection will emblazon the collections of other collectors.

Auction 282 offers many lots which can serve as showpieces of a collection. Geographically, the focus lies on the Netherlands and Belgium, as well as France, Great Britain, Italy, Russia, the Habsburg Empire and Germany. Every single specimen – whether it is estimated at 100 or 20,000 euros – tells its own story.

Let’s take, for example, two bronze medals (estimate: 500 / 4,000 euros), which were ordered by Antoine Perrenot de Granvelle. He served Charles V as one of his most important diplomats. In a time when travels were cumbersome, he repeatedly passed through Europe by the order of the emperor. And being a representative of a rigid religious policy, as carried out by Charles V, he experienced the hate of the Protestants. There is no better source than his medals to learn how he perceived himself: On their reverses they show the misfortunes of Ulysses accompanied by the motto DVRATE, which represents the beginning of a quote stemming from the Aeneid: Endure and preserve yourselves for better times. 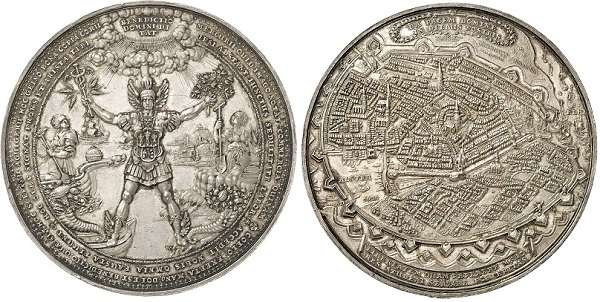 Thursday’s auction will start off with the Dr Heinrich Neumann Collection of Pomeranian coins and medals. Created in the 1970s, the collection focused on comprehensiveness. So, no wonder, it offers numerous extremely rare pieces; many of which are characterized by their provenance. The earliest striking derives from the 12th century. The spectrum of coins ranges from the Duchy of Pomerania – that is Pomerania-Stettin and Pomerania-Wolgast – to coins from the Bishopric of Cammin, Swedish occupied Pomerania, as well as strikings from the city of Stralsund. Finally, medals and several circulation coins produced in the city of Stettin display Pomerania’s fate under the rule of the Hohenzollern.

The following session consists of gold coins from pre-1871 Germany, the Holy Roman Empire, as well as Europe and overseas. Of course, the aficionado will find numerous rarities. Let’s take a look at four areas, each represented by one object: Pre-1871 Germany offers, for example, an 1829 gold medal commemorating the arrival of King Louis I of Bavaria in the city of Augsburg. The medal is unique and was last on the market at Hirsch Auction 19 in November of 1958 (estimate: 20,000 euros). An example for the Holy Roman Empire is a 1645 10 ducat piece minted in Vienna and almost extremely fine (estimate: 25,000 euros). As an example of a European striking serves a coin belonging to a Vatican coin collection: An undated, very rare and very fine quadrupla of Gregory XV, 1621-1623 (estimate: 20,000 euros). Last but not least, the field of overseas may be represented by a lot belonging to a large series of modern Chinese coins: a set of 1991 5 yuan, displaying inventions and discoveries of antiquity. The first series, which is estimated at 15,000 euros, was dedicated to ship building.

The auction will close with about 390 Russian coins. Here as well, let’s look at one piece in particular: an 1831 gold medal of 12 ducats, which was given to the winners of the Demidov Prize. The Demidov Prize was awarded to scientists annually until 1866 and was endowed with 25,000 rubles (estimate: 25,000 euro).

Lot 5136: POMERANIA UNDER BRANDENBURG-PRUSSIA. 4 ducats 1677, Berlin, on the seizure of Stettin by the Brandenburgs on December 27. Extremely rare. Extremely fine. Estimate: 15,000,- euros

Auction 284 Part 1 and 2: Orders and Decorations

The afternoon of Friday, September 30 of 2016 will be dedicated to the first part of Auction 284 offering orders and decorations. More than 300 lots of selected orders, allotted with an overall estimate of ca. 600,000 euros, will go over the auction block. The second part of Auction 284 will take place online: This eLive Premium Auction will take place October 5 and 6 of 2016 at Künker owned website www.elive-auction.de. Together, all lots of this part of the auction encompass an overall estimate of 135,000 euros.