The Royal Australian Mint has launched a special new coin to remember the Australian recipients of the Victoria Cross, the highest military decoration awarded for valor “in the face of the enemy” to members of the armed forces of various Commonwealth countries, and previously, British Empire territories.

First introduced on the 29th January 1856 by Queen Victoria as a way to honor acts of valor during the Crimean War, the medal has since been awarded 1,357 times to 1,354 individual recipients. The Victoria Cross (VC) takes precedence over all other orders, decorations and medals. It may be awarded to a person of any rank in any service and to civilians under military command. The Victoria Cross is usually presented to the recipient or to their next of kin by the British monarch at an investiture held at Buckingham Palace. Since its creation, a total of 100 Australians have received the prestigious award for valor. The first three men to have received the medal was in 1900 for their service in the second Boer War – the last two recipients being in 1969 for their service in the Vietnam war. Since 1975 and by Royal warrant from Queen Elizabeth II – as Queen of Australia, Australians have had their own version of the Victoria Cross with four men having been awarded the medal which is presented by the Governor-General, representative of the Queen. 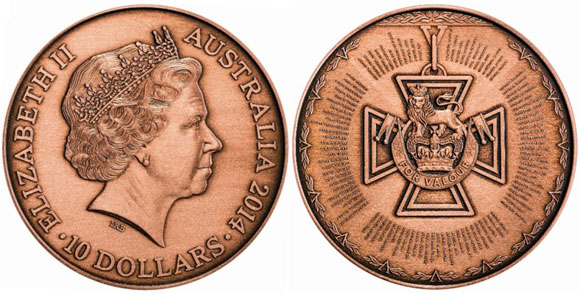 The coin, produced in copper with an antique finish – replicating the look of the actual Victoria Cross medal also includes the names of every Australian Victoria Cross recipient surrounding a representation of the Victoria Cross medal itself. The substantive size of the coin enabled the Mint to use micro text, an innovative technical minting process, to fit all 100 names onto the coin design, and applied a similar technique used for medal production to create an antique finish. The obverse of this unique coin includes the current portrait of HM Queen Elizabeth II designed by Ian Rank-Broadley as well as the coin’s denomination of ten Dollars under the portrait and the year of issue, 2014.

The public had the opportunity to see this extraordinary coin for the first time when it was part of the at the Anzac Day commemorative rugby match on the 25th April. In lieu of the traditional coin toss, a quick game of two-up will be played using a bespoke kip (paddle) fitted with two of the Royal Australian Mint’s impressive Anzac Centenary commemorative coins.

Only five thousand of the 2014 $10 copper antique-finish “A History of the Victoria Cross” coins will be produced. The Royal Australian Mint are inviting the public to submit a ballot entry for an opportunity to purchase one example from today until the 30th May. A $5 silver coin carrying a mintage of 30,000 pieces has also been released.

For more information on this and other coins offered by the Royal Australian Mint, please visit their website at: http://www.ramint.gov.au/ Information offered in English, international orders dispatched.