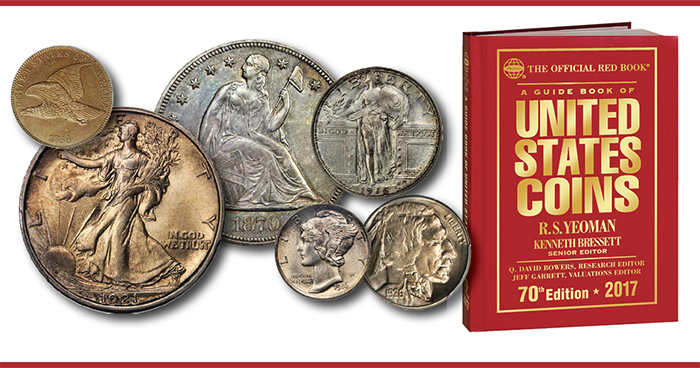 Since November of last year, Coin Update has been following an excellent blog series written by Mike Sherman for PCGS.com. Called “Seventy at Seventy,” the series uses data in the iconic Guide Book of United States Coins (which has its 70th anniversary this year) to track the price performance of “70 representative U.S. coins from across a wide spectrum of the hobby . . . at 10-year intervals from the first edition in 1947 to the present 2017 edition.” Since Coin Update’s parent company is Whitman Publishing, which publishes the Red Book, we’re naturally quite interested in this study.

Sherman breaks his analysis down into seven groups: Early (pre-1807) type coins, key-date coins, 19th-century type coins, rare-date gold coins, silver dollars, gold type coins, and colonial/commemorative coins. Of course, studying any coin (let alone 70 of them) across such a wide time span means accounting for two things, as Sherman states in the first post. One is the changes in grades across the years:

Not only did the first edition predate the Sheldon Numerical Grading System (which did not even gain widespread use outside of early copper coins until the late 1970s), but the whole notion of ‘grades of Uncirculated’ did not really exist before the 1960s. Even then, such descriptions as Choice or Gem BU were vague and anything but formally defined.

The other is the often-staggering effect of inflation:

Our last post looked at part 2, which examined early type coins. Sherman found that his group of seven selected coins—the 1793 cent and half cent, the 1807 dime, the 1796 quarter dollar, the 1797 half dollar, and the 1794 and 1802 dollars—returned 4.5% every year, even after accounting for inflation. (His analysis is, of course, more detailed than this quick summary; you can read more here.)


We now move on to part 3, in which the author studies key-date coins, mostly from the 20th century and from commonly collected series. The 14 coins in this part of the study are as follows.

At first glance, before adjustments are made for inflation, the Red Book–value increase is dazzling: from a total of $523 in 1947’s first edition to $80,475 in the 2017 edition. After the appropriate adjustments are made, however, the key-date group doesn’t perform as well as the early type-coin group. (Although, to be fair, notes Sherman, “much of the return on the early type group was provided by the 1794 silver dollar, which soared from $650 in 1947 to $150,000 today.”)

Sherman goes on to look at the coins’ performance across the decades, and finds a big discrepancy between the inflation-adjusted annual return on the group over the 70-year period and their return for the 50 years since 1967. To read his analysis in full, check out “Seventy at Seventy Part Three—Key Date Coins” on the PCGS website.

The 2018 Red Books are available for pre-order! Click here to see the hardcover, spiral-bound, wire-o, and large-print editions.
Share: