Shortly before the summer break, auction house Numismatik Lanz offers 1,350 lots of numismatic rarities for sale from ancient, medieval and modern times. The collector can particularly look forward to the Pollak Collection, which was put together between 1930 and 1960 or so, with its focus on coins from the House of Habsburg and the German Empire.

Coins from antiquity, medieval and modern times, everything with a collector-friendly estimate, in addition to that a comprehensive private collection that has been untouched for roughly 50 years – this is what the collectors wish for. The catalog speaks for itself, offering something for every taste and every budget.

After a small section of Celtic coins, it is the Greek’s turn, pleasing the connoisseur with rare fractions and bronze coins. To state but some examples: the extremely fine silver litra from Syracuse, minted under Timoleon (344-317). The charming piece shows a chimera on its obverse (41; estimate: 500 EUR). Or the funny diobol from Olynthos on whose obverse a guenon crouches to the left. This item, which was made in the middle of the 5th century, is not only extremely fine but extremely rare as well (93; estimate: 600 EUR). Anyone fond of bronze coins with a fine patina should have a look at the almost extremely fine and very rare bronze from Kentoripe. The obverse of this piece which was minted between 344 and 336 seizes on the perfection of the famous Kimonean dekadrachms (28; estimate: 1,500 EUR). We mustn’t omit the small group of Armenian coins, much sought-after rarities for many special collectors. 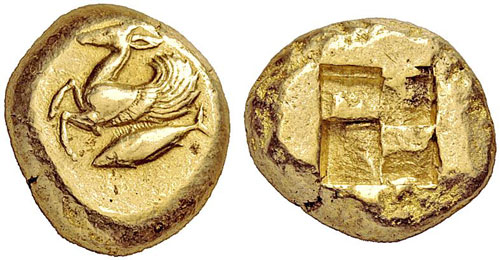 The highlight of the Greek section is a comprehensive series of coins from Kyzikos. The series, ranging from the early pieces from the middle of the 6th century to the rich figural compositions made around 400, provides a good overview of the coinage of the Greek city at the Sea of Marmara. Be it an elegant animal depiction – like a perfectly centered and extremely fine stater with a winged forepart of a deer (142; estimate: 20,000 EUR) – or a detailed depiction of a deity – like, for example, a kneeling Zeus with the eagle on his outstretched right hand as stater (147; estimate: 2,000 EUR – sic!) and as hekte (148; estimate: 7,000 EUR), here the aficionado will find everything he is wishing for.

Looking at the coins of the 4th century, we receive a foretaste of the Karl Pollak collection. In 1956 the collector happened to rescue a gold medallion from a jeweler’s melting pot. He paid 1,100 Austrian schillings for the medallion in the weight of two solidi, struck in 353 on the occasion of the tricennalia of Constantius II in Arelate. 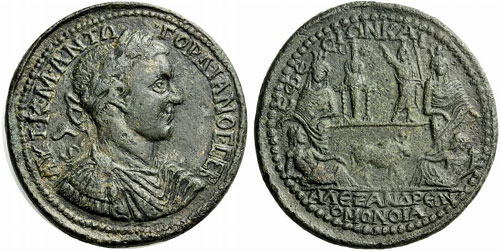 The aficionado of coins from the Roman provinces is particularly cared for. The catalog includes a series of the tetradrachms from Roman Alexandria and the didrachms from Caesarea Cappadocia. In addition, there is a whole number of coins of high culture-historical importance available, like a bronze coin from the city of Ephesos, minted on its homonoia with Alexandria. The splendid depiction on the reverse shows three representatives of the two cities at once: the city goddesses, the Tyches, the river gods, as well as the Apis bull who was worshipped not only in Alexandria, but in the so-called “Red Hall” in Ephesos, too (441; estimate: 3,000 EUR).

A special feature is the Pollak Collection with coins from the House of Habsburg, Germany and Austria, the Vatican and numerous other world coins. It contains some spectacular pieces, but also many things a collector with an ordinary budget seeks for his collection: fresh material with marvelous provenances, sometimes with small defects which makes the otherwise extremely rare items affordable. The auctioneer is able to state not only the acquisition date and the seller of almost every lot but likewise the price that was paid for the coins. While browsing through the catalog, a time is revisited when a collector didn’t just look at a coin’s condition but its rarity and its historical significance as well.

A major part of the coins of the collector from Graz comes from the Habsburg Empire, starting with Maximilian I. Numerous thalers bear witness of the extensive coining of the early modern emperors, but, as the 19th century approaches, the conditions are getting finer and the connoisseur discovers more and more rarities. A case in point is the almost brilliant uncirculated 20-lire-piece from 1848, minted during the Revolution of 1848/9 in Venice (810; estimate: 4,000 EUR). It had been acquired on February 4, 1957, from the Numismatic Society in Graz for 250 schillings. Less than half that sum, i.e. 115 schillings, the collector paid to Dr. F. in Bad Aussee a year later for a highly scarce, about brilliant uncirculated ducat from 1881 from Kremnitz, now estimated at 10,000 EUR (872).

Similarly impressive is the collection’s second part with coins from the German Empire, from medieval times until the 19th century. A whole series of splendid bracteates in nice condition can be found here, dispersed throughout the section, plus magnificent baroque coins of spiritual and secular princes. We refer to a thaler of the Count of Eggenberg from 1629, minted in Prague, very rare and almost brilliant uncirculated (1012; estimate: 9,000 EUR). In 1956, in the Dorotheum, a collector paid the then exorbitant sum of 700 schillings for the gorgeous piece with a collector’s punch at the edge!

Last but not least are the world coins, which Karl Pollak managed to buy. They are impressive considering the circumstance that then telefax and internet did not exist. The relatively high prices, when compared with the “local” coins, Pollak had to pay for foreign coins bear witness of the difficulties he faced back then. He managed to put together a small series of Russian coins, including something very spectacular: an ensemble of patterns of the Soviet Union’ circulation coins from 1956 (1235-1240). The patterns are estimated at 7,000 EUR each. It remains to see to what heights thrilled collectors will boost the price.

The collection and hence the auction will be concluded by an interesting series of coins and medals of the Vatican. Gorgeous medals and intriguing coins with moderate estimates wait to get a new owner.

Anyone looking for more information on the auction can order the catalog for a fee of 15 EUR. The email address reads .

The material can also be viewed on the internet at www.lanz.com or www.sixbid.com.

It always pays off to participate in an auction of Numismatik Lanz – either via internet or in the auction room. The lots are called up at 60% of the estimate. In the re-sale, however, you can buy the lots at 80% the estimate.