66 years ago, the Korean Armistice Agreement was signed by U.S. Army Lieutenant General William Harrison, Jr. and North Korean General Nam Il. While the agreement called for a “complete cessation of hostilities,” it was not a final agreement of peace between the powers involved, and tensions have frequently oscillated in the following 66 years. On July 26, 2017, President Donald Trump proclaimed that the 27th of July would be National Korean War Veterans Armistice Day. With the 27th of July being a date of military significance for over half a century, it is no surprise that a variety of numismatic issues have been produced within that timeframe. One such issue was the 1991 Korean War Memorial silver dollar.

The 1991 Korean War Memorial silver dollar commemorated the 38th anniversary of the Korean Armistice Agreement and the individuals who served during the conflict. The commemoration of the 38th anniversary with a coin instead of the 50th was an intentional reference to the 38th degree of latitude, which separates North and South Korea. Authorized by the Korean War Veterans Memorial Thirty-Eighth Anniversary Commemorative Coin Act (Public Law 101-495) on October 31, 1990, surcharges collected from the coin were deposited into the Korean War Veterans Memorial Fund and were used to:

As such, it was noted in the Red Book that critics of the coin suggested that its issuance was little more than a fundraising effort for the national monument in D.C.  However, despite these objections, buyers of the coin reacted mostly in a positive manner, and 831,537 were produced. To those interested in collecting this issue, Mega Red lists Gem Uncirculated (Denver Mint) and Proof (Philadelphia Mint) coins going for $35 in the marketplace, and are still considered “readily available.” 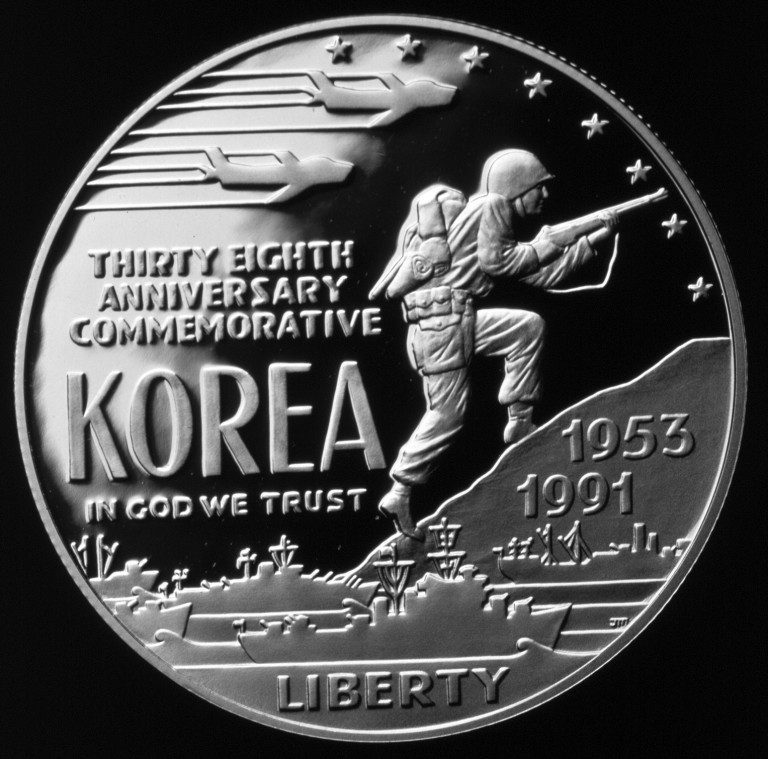 The obverse of the coin was designed by Mint sculptor-engraver John Mercanti and features a soldier carrying a backpack while climbing a hill, with two F-86 Sabrejet fighter aircraft flying in the same direction. Toward the bottom are five Navy ships above the word LIBERTY. 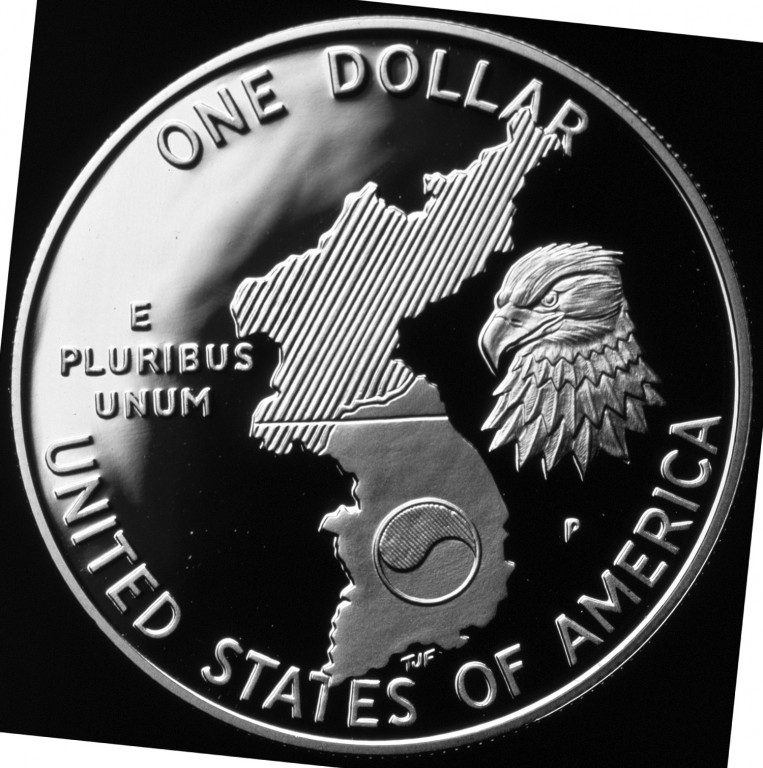 The reverse, designed by Mint sculptor-engraver James Ferrell, displays a divided outline map of North and South Korea. To the right of the map is an eagle’s head, which represents the United States, and toward the bottom is the symbol of Korea.

Another criticism of the coin was that the design is too cluttered. Whether or not this is true is as subjective as the matter of whether or not the Korean War has truly ended. Regardless of the controversy surrounding this hot-button issue, if you know any veterans of this conflict, be sure to thank them and do something nice for them this Saturday.