The United States Mint has confirmed the sales starting date for the eagerly awaited 2011 25th Anniversary Silver Eagle Set. Orders will be accepted starting on October 27, 2011 at 12:00 Noon ET. Shipping is expected to begin in late November. 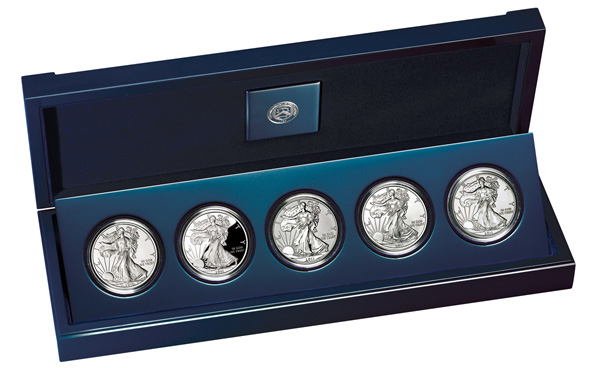 The Mint first announced their plans to issue the set at the ANA World’s Fair of Money in August. Each set includes five one ounce American Silver Eagles in a custom designed hardwood presentation case.

The five coins include:

Previously released information indicated production of “up to 100,000” sets, however the final production limit has not been confirmed. An ordering limit of five sets per household will be in place for at least the first week of sales. At the end of this period, the limit will be re-evaluated and either extended, adjusted, or removed.

Pricing for the 25th Anniversary Silver Eagle Set has not yet been determined. The Mint previously indicated that they would establish the price as close as possible to the product release date due to recent volatility in the market price of silver.

A preliminary product page can be found on the US Mint’s website here, although ordering options won’t be available until the official start of sales.