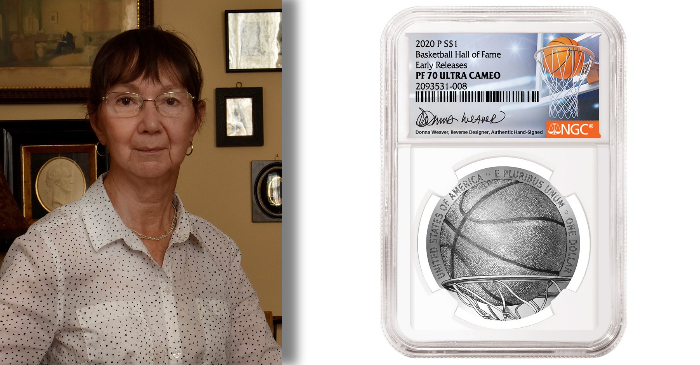 Nothing but net: Donna Weaver’s design for the reverse of the 2020 basketball coins captures the essence of the game.

Weaver’s elegant design features a finely detailed basketball about to pass through the net, with the inscriptions UNITED STATES OF AMERICA, E PLURIBUS UNUM, and the coin’s denomination around the circumference. Her design will be enhanced by the curvature of these coins — only the third curved, or domed, coins ever struck by the U.S. Mint. 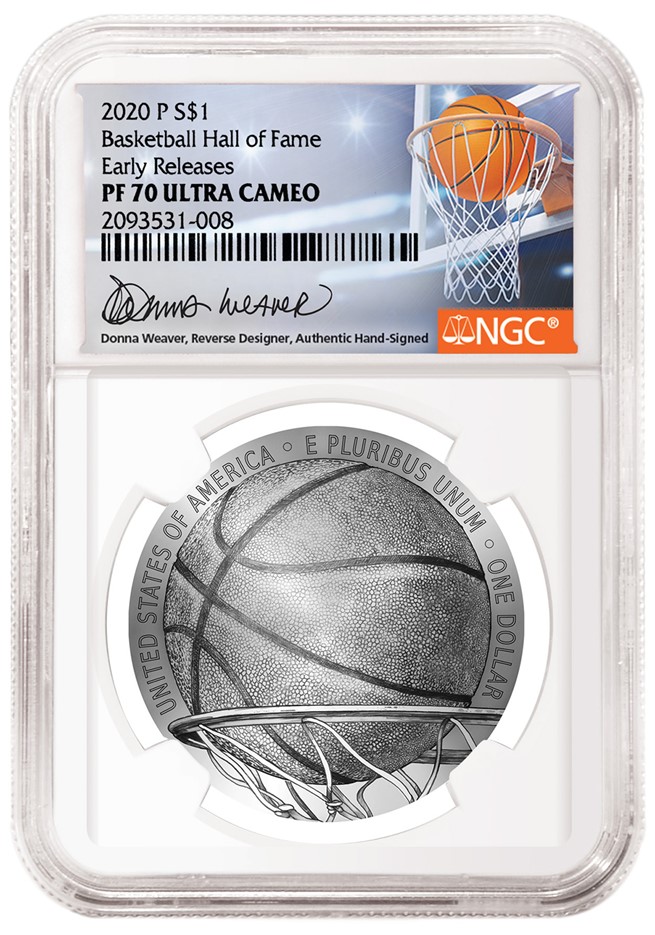 The NGC Donna Weaver Basketball Signature Label with a rendering of the 2020 Basketball Hall of Fame silver dollar holdered reverse up. Hover to zoom.

The 2020 Basketball Hall of Fame commemorative coin’s reverse is only the most recent coin that Weaver has designed for the U.S. Mint. From 2000 to 2006, she served as a medallic artist at the Philadelphia Mint, during which time her designs were selected for use on over 30 coins and medals. She also engraved many of the models required to produce these coins and medals, in addition to engraving the designs of other artists.

In the years since, Weaver has gone on to design nearly 50 more coins and medals as a member of the Mint’s Artistic Infusion Program (AIP). Notable coins recently designed by Weaver include the 2019 American Liberty high relief gold coin and silver medal reverse and the 2018 American Innovation dollar reverse.

The highly anticipated 2020 Basketball Hall of Fame commemorative coins will be released on April 4, 2020, in three denominations: A clad half dollar, a silver dollar, and a gold five dollars. Weaver’s design, along with her “DW” initials, will appear on all of them.

“When I am designing a coin, I like to think that the smallest canvas reaches the largest number of people,” said Donna Weaver. “I am pleased to partner with NGC to celebrate the beauty and breadth of U.S. coins, including the exciting 2020 Basketball Hall of Fame commemorative coins.”

“We are extremely honored that Donna Weaver has chosen to autograph NGC certification labels for the 2020 Basketball Hall of Fame commemorative coins and other coins,” said Mark Salzberg, NGC chairman and grading finalizer. “She is one of the most accomplished coin and medal designers of the last two decades with an impressive body of work that covers some of the most important subjects and symbols in American history.”