On April 16, at 9:30 a.m. (EDT), the Citizens Coinage Advisory Committee (CCAC) held the first of two meetings (the second was held April 17 at 10:00 a.m.) to review and discuss designs for upcoming issues by the Mint. Among the coins and medals that were reviewed during this two-day meeting period were the Mayflower 400th Anniversary 24-karat gold coins and silver medals, the 2019 American Innovation $1 coins, and the 2021-2025 American Platinum Eagle Proof Coin Series. The 2019 American Innovation $1 coins will include the states of Delaware, Pennsylvania, New Jersey, and Georgia. Below are the various proposed designs for the Pennsylvania coins and their accompanying descriptions. Let us know in the comments which designs you would choose!

Conceived during the Great Depression and built in less than two years, the Pennsylvania Turnpike was hailed as the nation’s first superhighway when it opened for automobile traffic on October 1, 1940. 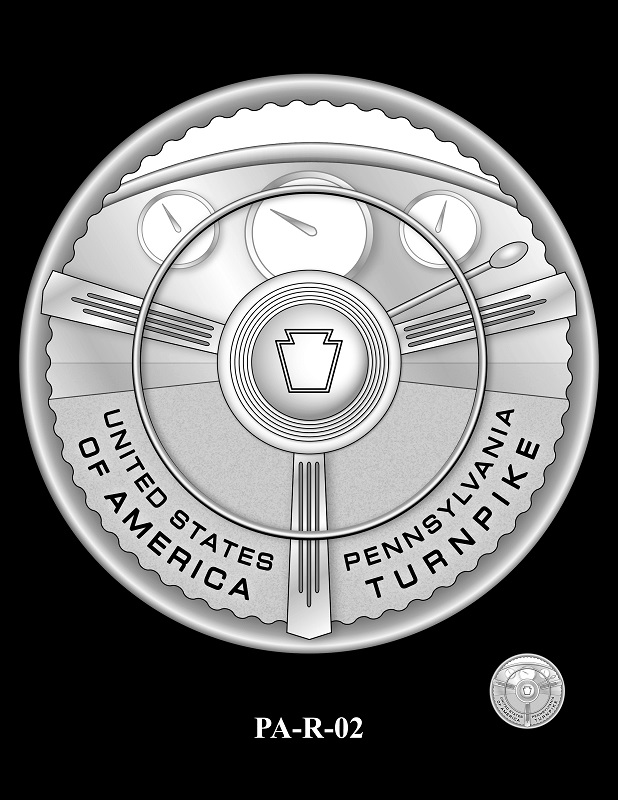 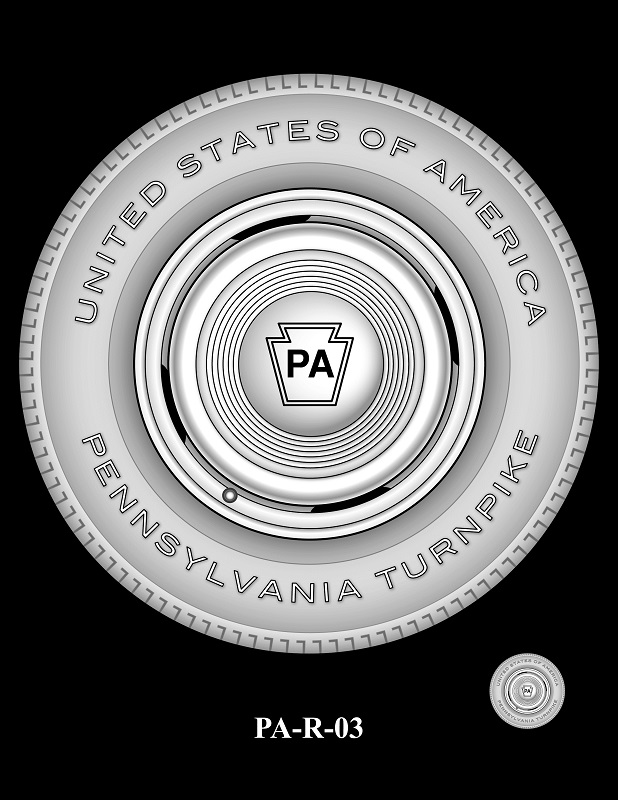 PA-R-03 mimics a 1940’s automobile tire and wheel cap with the Pennsylvania Turnpike logo outline in the center. 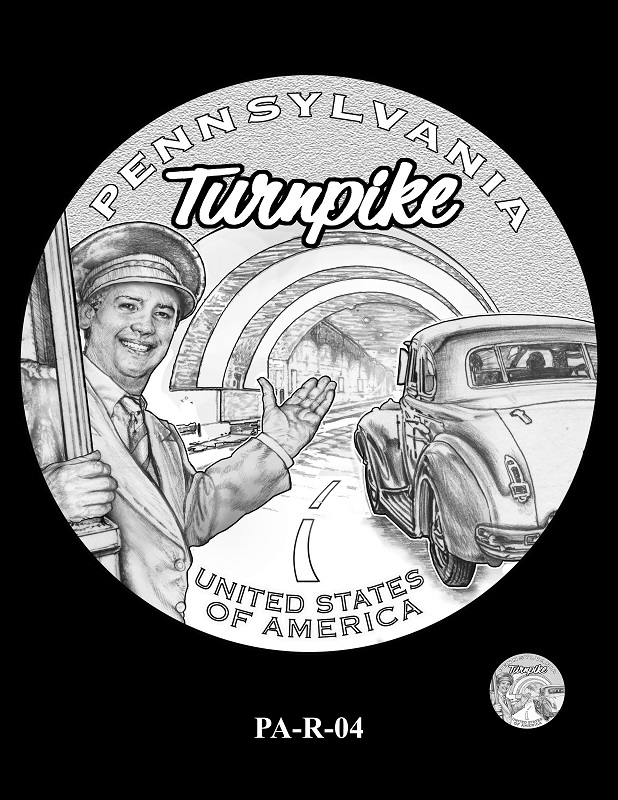 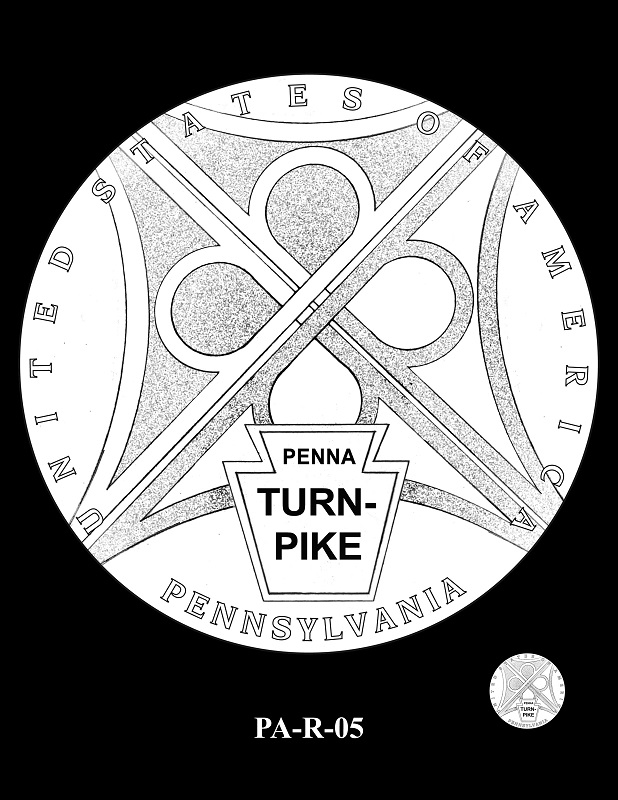 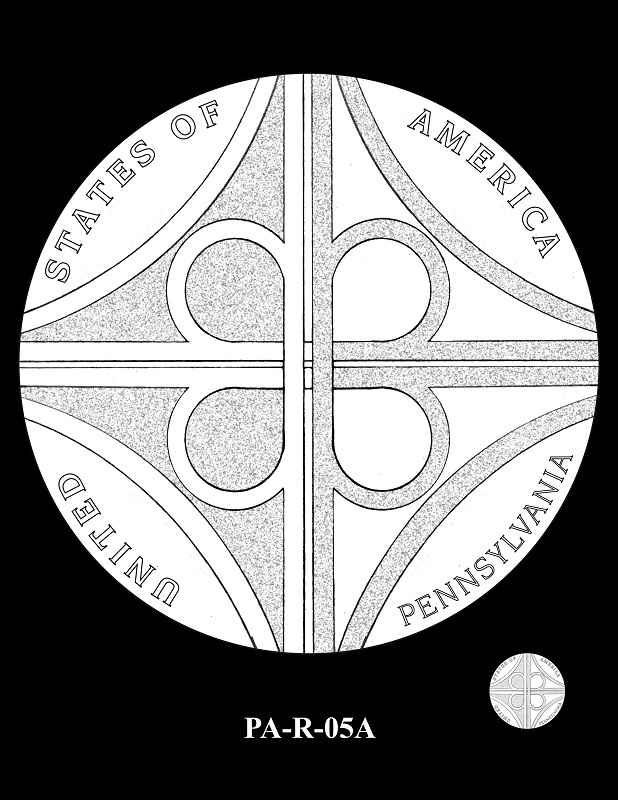 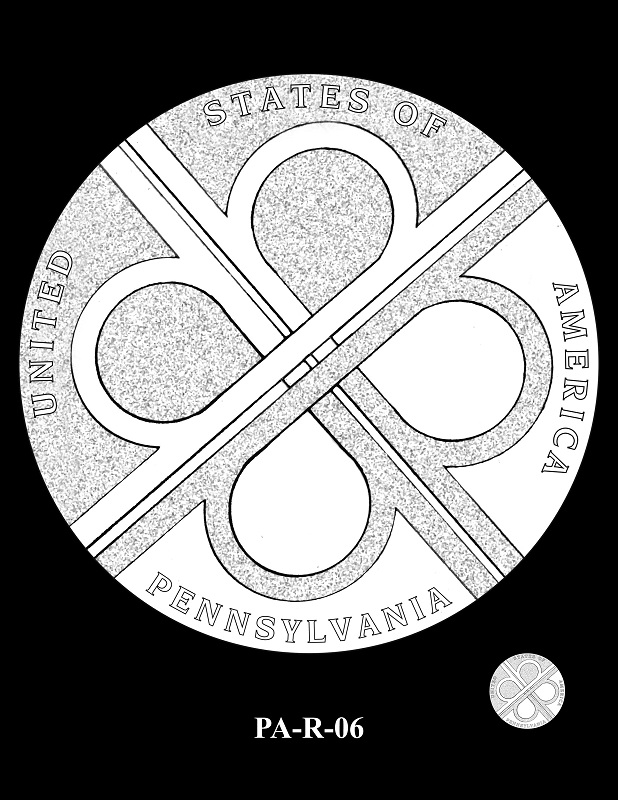 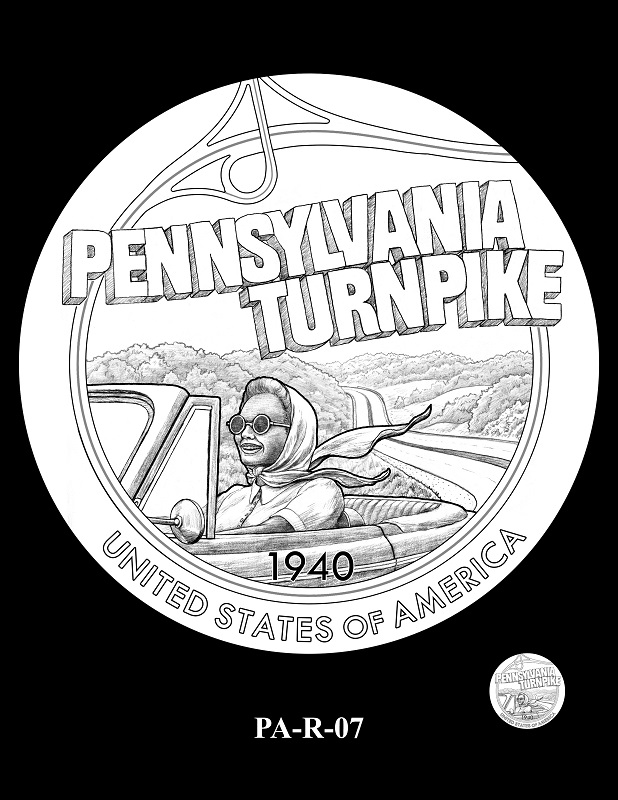 PA-R-07 depicts a smiling woman in a 1940’s convertible driving along the Pennsylvania Turnpike. Encircling the drawing is a stylized depiction of the Turnpike with a trumpet-style interchange that characterized many of the original 1940’s interchanges. The inscription “Pennsylvania Turnpike” is shown in the style of linen postcards common in the 1930’s-1950’s. The inscription “1940” indicates the year the Turnpike opened. 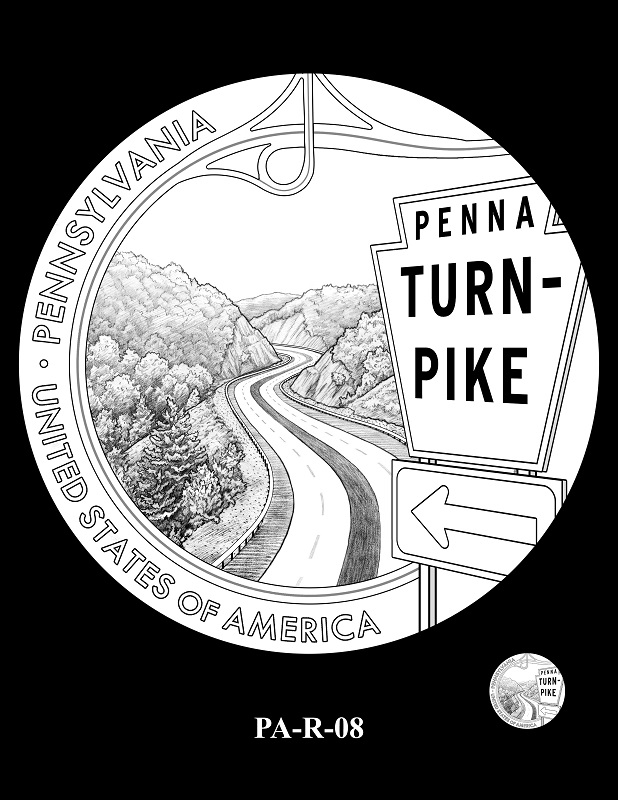 PA-R-08 features the familiar keystone shaped “Penna Turn-Pike” road sign pointing toward a depiction of the turnpike showing the road’s remarkable features – passing through mountains via roadcuts, making travel faster and safer. Encircling the drawing is a stylized depiction of the Turnpike with a trumpet-style interchange that characterized many of the original 1940’s interchanges. 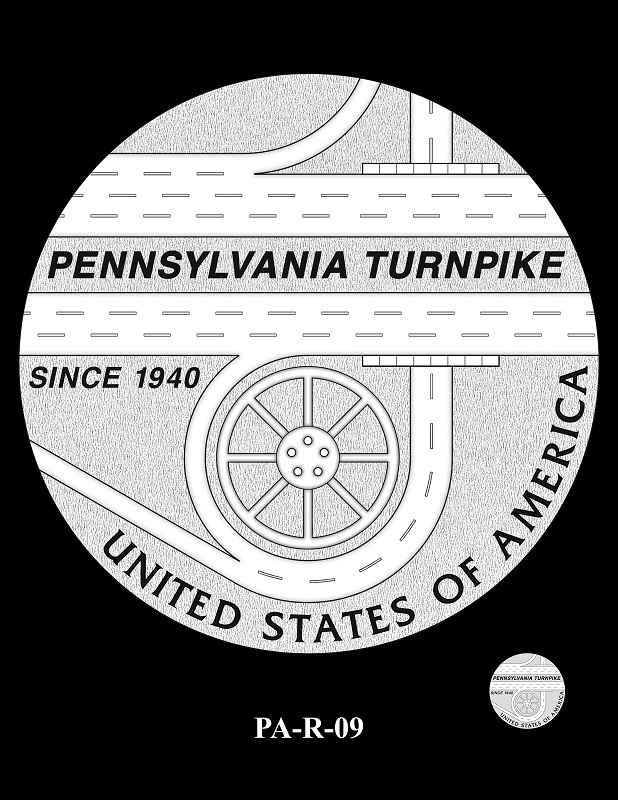 PA-R-09 and PA-R-10 depict a bird’s eye view of a busy interchange along the Pennsylvania turnpike. Design 9 features a modern view of the turnpike, while design 10 features the traditional two lane roads. The large wheel inside the ramp loop conveys a sense of continual motion (like traffic) while also symbolizing the ideas of transportation, invention, and progress. The additional inscriptions are “Pennsylvania Turnpike” and “Since 1940.” 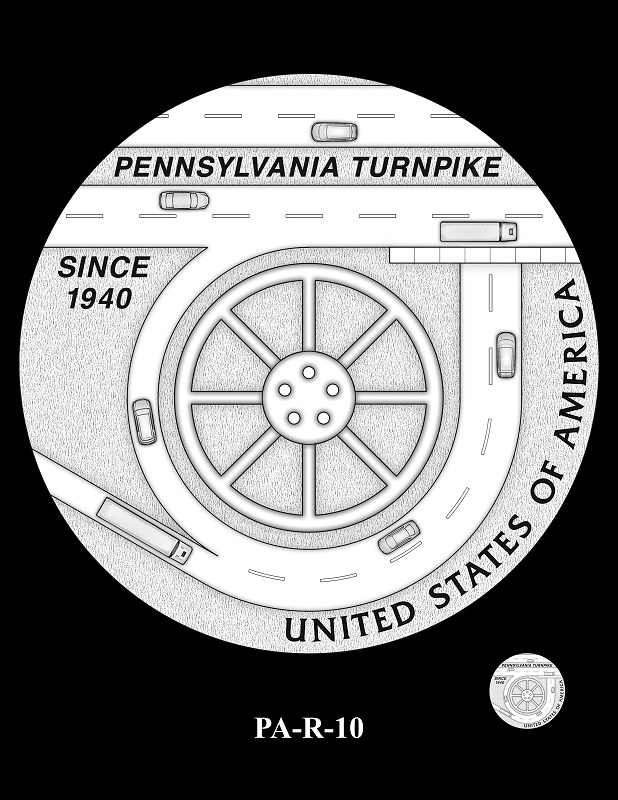 In 1953, the University of Pennsylvania announced that Dr. Jonas Salk and his team had discovered a vaccine they believed could prevent polio, a devastating disease which disproportionately affected children and young adults and left many of its victims paralyzed and unable to walk. 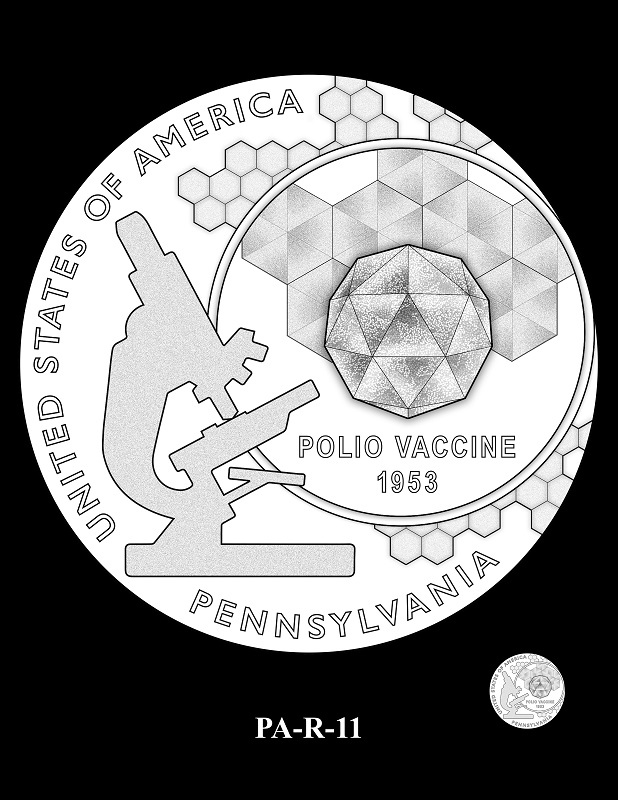 PA-R-11 depicts an artist’s conception of the poliovirus at three different levels of magnification along with the silhouette of a period microscope, representing the extensive research that was conducted to develop a cure for polio. The additional inscriptions are “Polio Vaccine” and “1953.” 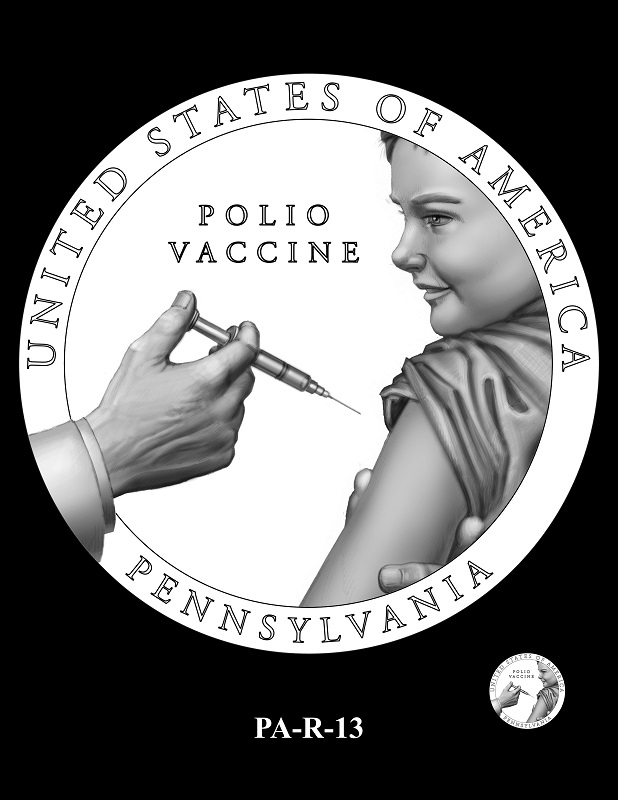 PA-R-13 depicts a child receiving a vaccination, and features the inscription “Polio Vaccine.” 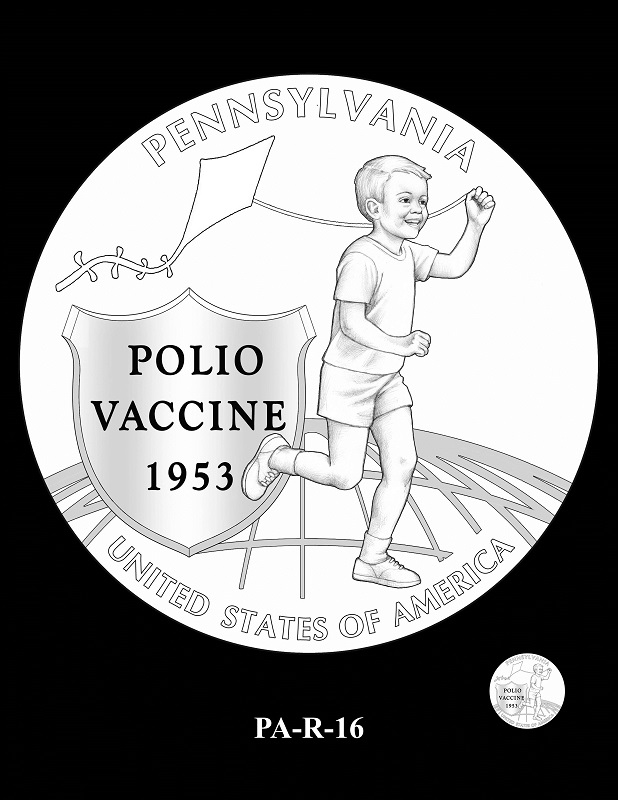 PA-R-16 features a child running with a kite and a shield with the words “Polio Vaccine 1953.” The shield represents the defense and protection from polio and the globe represents the international success of the vaccine. 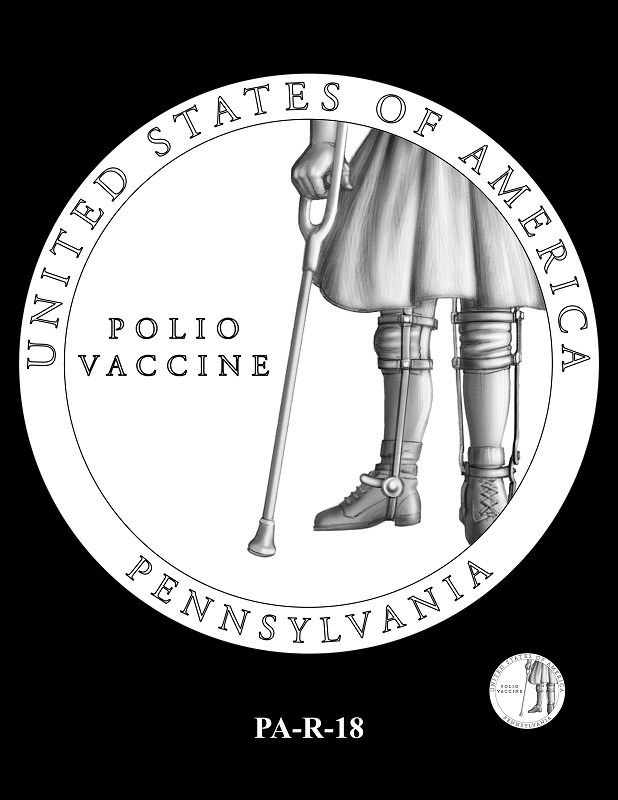 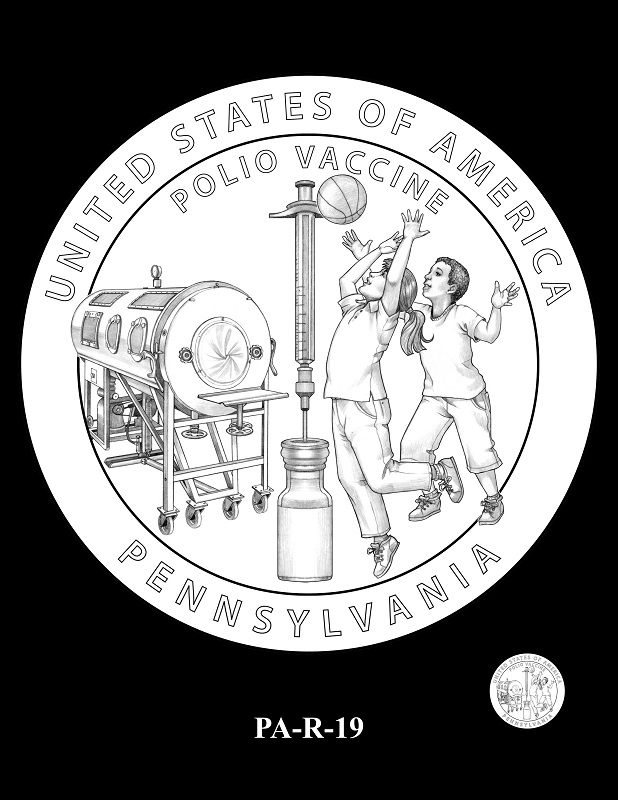 PA-R-19 represents the before and after of the polio vaccine, divided by the image of a syringe and bottle. A now obsolete iron lung is depicted on the left side of the design. On the right side, two children play basketball. The additional inscription is “Polio Vaccine.” 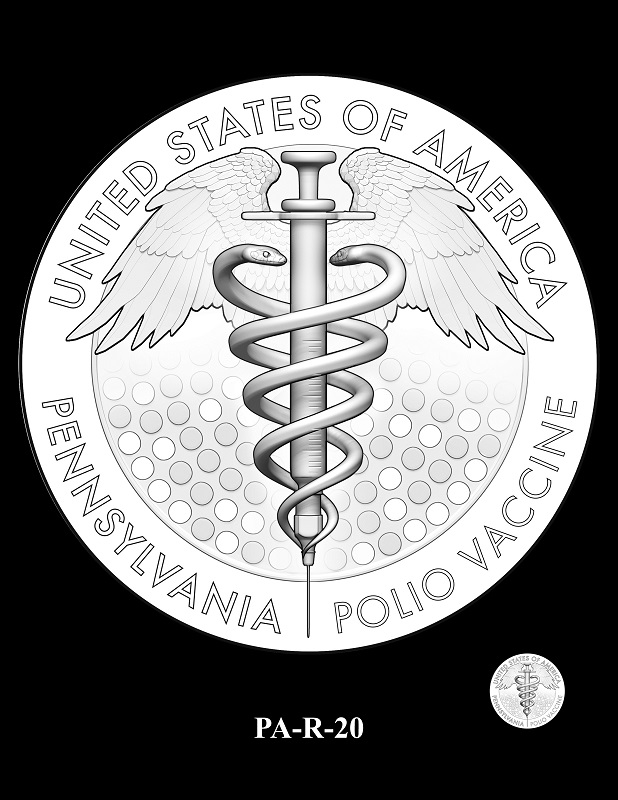 PA-R-20 depicts a Caduceus (often used as the symbol of medicine) formed around a vaccination syringe with a rotating drum-style test tube rack in the background, representing the development of the polio vaccine and the strong history of medical innovation in Pennsylvania. The additional inscription is “Polio Vaccine.”

Pennsylvania’s history includes an extensive list of medical innovations, starting with the creation of the nation’s first public hospital in Philadelphia with help from Benjamin Franklin in 1751. Pennsylvania Hospital was founded to care for those in the city who could not afford private medical care in their homes. 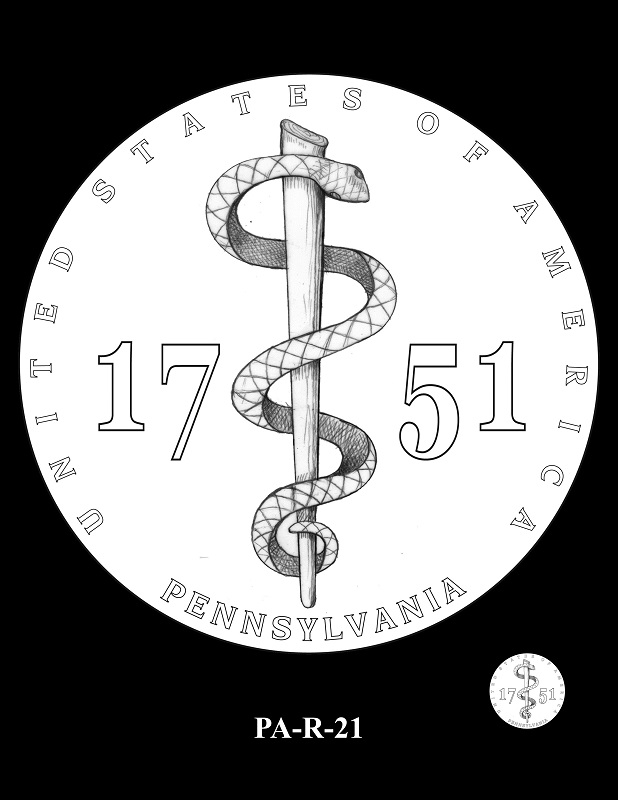 PA-R-21 depicts the Rod of Asclepius. Asclepius is the Greek god of medicine and healing. The additional inscription “1751” represents the creation of Pennsylvania Hospital, the nation’s first public hospital.