On April 16, at 9:30 a.m. (EDT), the Citizens Coinage Advisory Committee (CCAC) held the first of two meetings (the second was held April 17 at 10:00 a.m.) to review and discuss designs for upcoming issues by the Mint. Among the coins and medals that were reviewed during this two-day meeting period were the Mayflower 400th Anniversary 24-karat gold coins and silver medals, the 2019 American Innovation $1 coins, and the 2021-2025 American Platinum Eagle Proof Coin Series. The 2019 American Innovation $1 coins will include the states of Delaware, Pennsylvania, New Jersey, and Georgia. Below are the various proposed designs for the New Jersey coins and their accompanying descriptions. Let us know in the comments which designs you would choose!

Thomas Edison and his team developed a lightbulb with a filament that could last 1,200 hours, marking the beginning of commercially manufactured lightbulbs, giving people easy control over light in homes, allowing businesses to employ shift workers, and requiring a large power grid, creating jobs across the country. 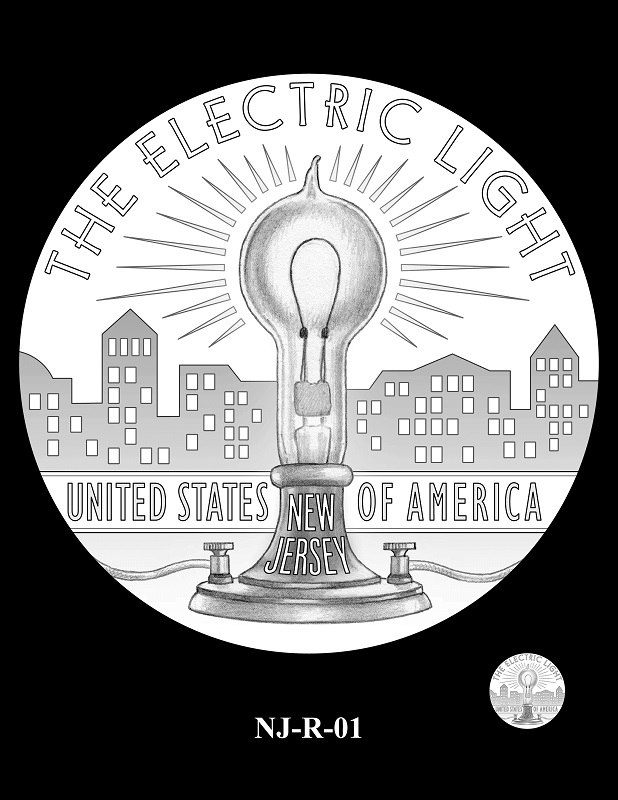 NJ-R-01 depicts an Edison bulb against a backdrop of a cityscape illuminated with electric lights. The additional inscription is “The Electric Light.” Hover to zoom. 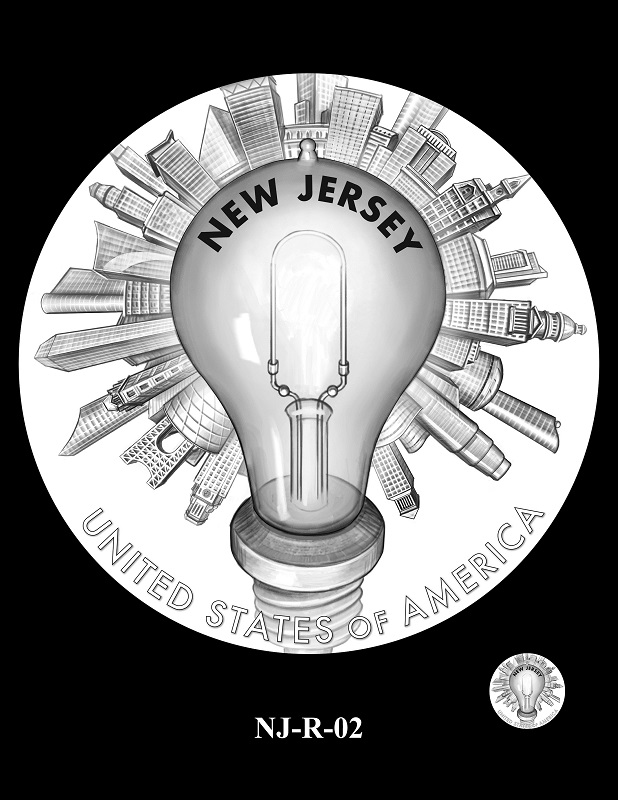 NJ-R-02 features an Edison-style light bulb with a circular array of buildings oriented outward as if they were rays of light. This radial arrangement of the cityscape suggests the transformation and modernization of cities made possible by the introduction and development of electric light. 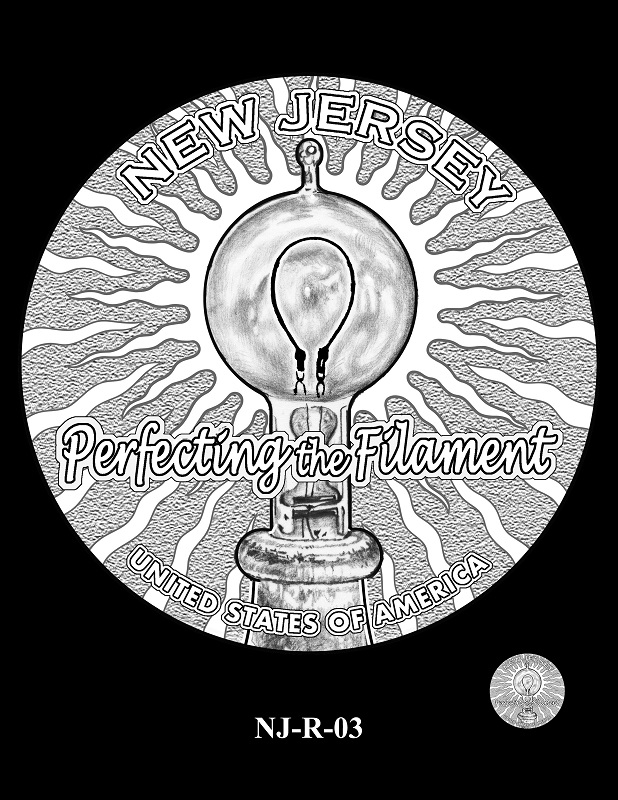 NJ-R-03 and NJ-R-04 depict an Edison bulb set against a dynamic and energized electrical field. The inscription, “Perfecting the Filament,” describes Edison’s innovation that made electric light commercially viable. 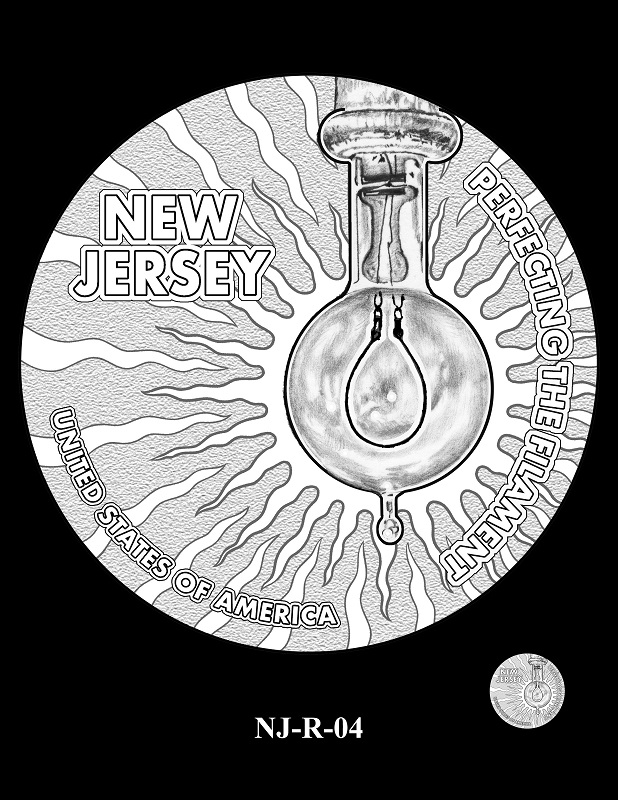 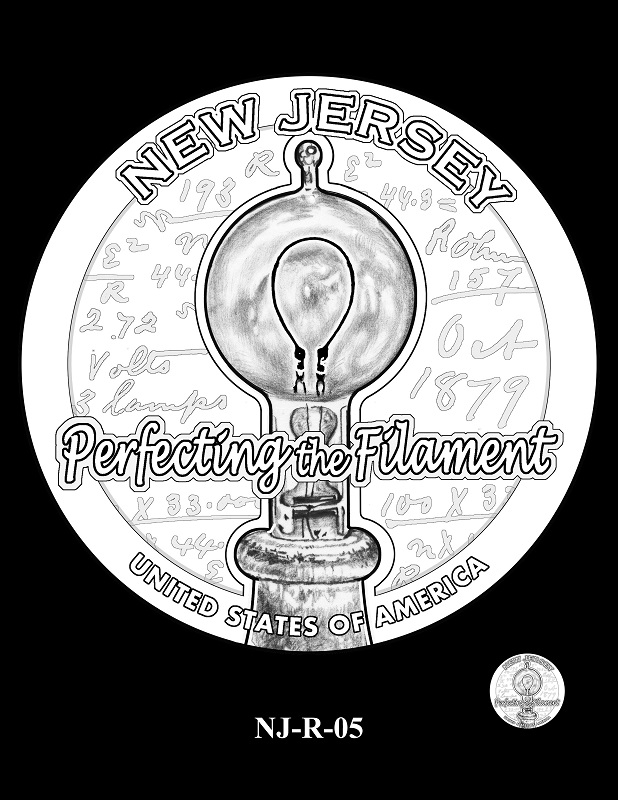 NJ-R-05 and NJ-R-05A also depict an Edison bulb with the inscription “Perfecting the Filament.” Design 05 features calculations representing the research and experimentation that Edison and his team undertook while developing the filament. 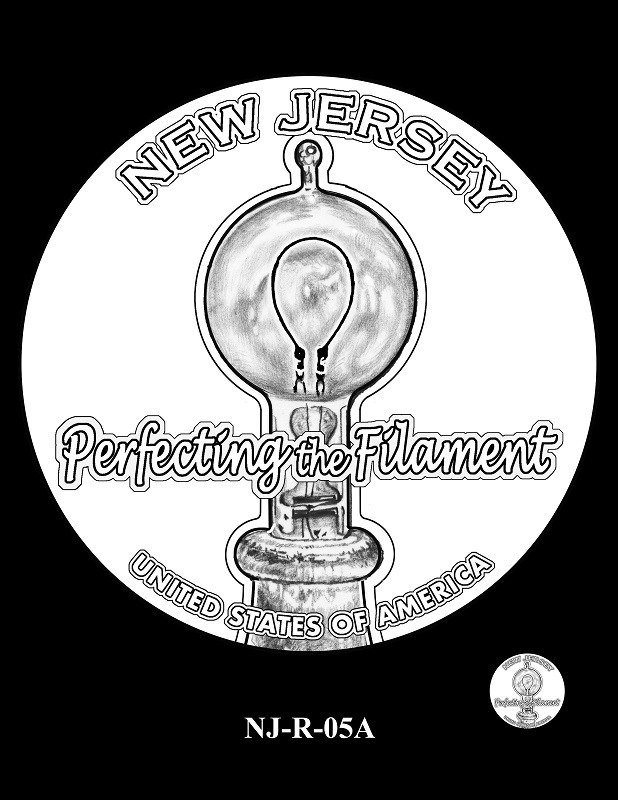 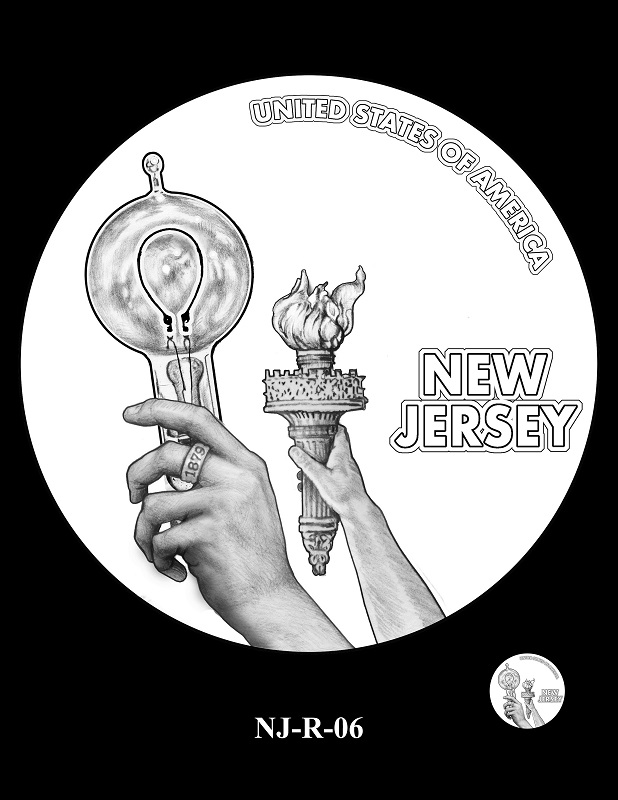 NJ-R-06 depicts an Edison bulb held up next to the Statue of Liberty’s torch, representing the importance of the light bulb in American culture. 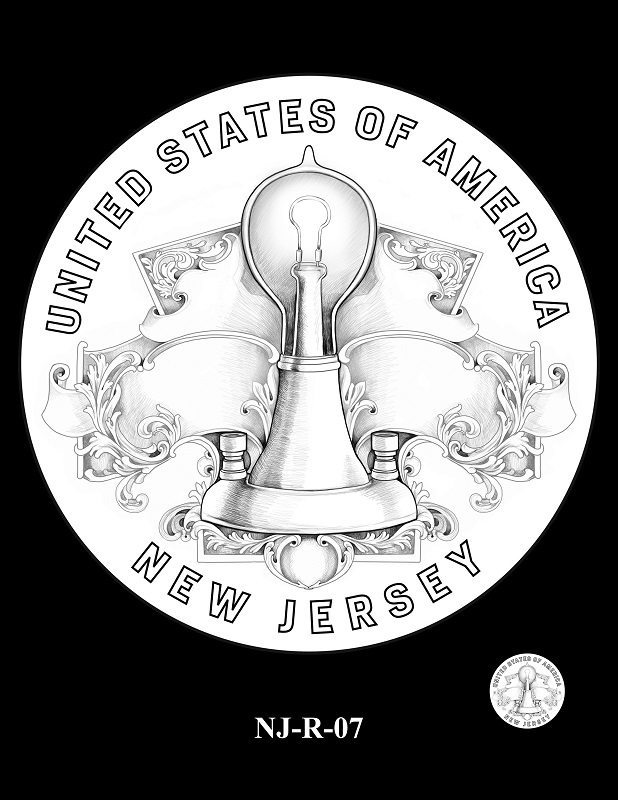 NJ-R-07 features an Edison bulb against an ornate background. 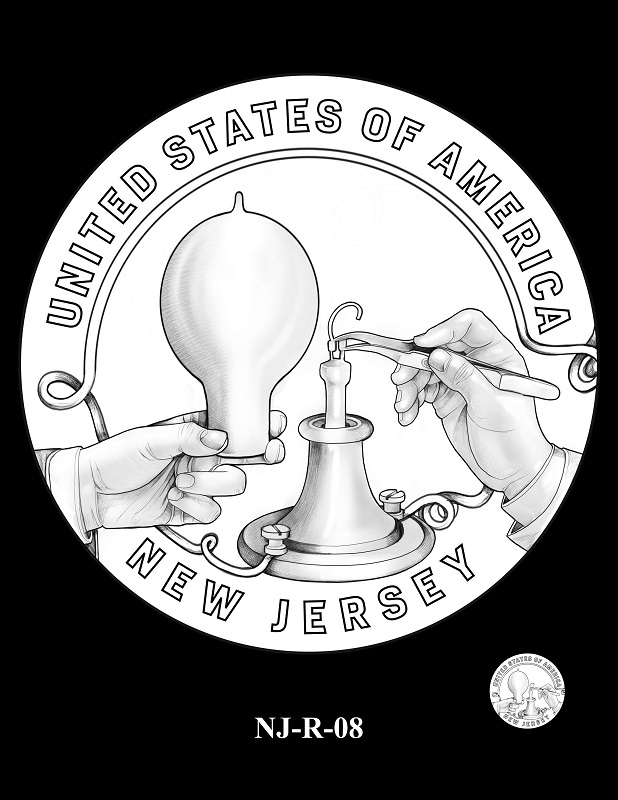 Prior to WWI, New Jersey was the center of the motion picture industry. The Edison Company developed the strip kinetograph and kinetoscope, designed to show movies to a single viewer, then based upon other innovations, developed a projector allowing films to be shown to large audiences. The team built a movie studio known as the Black Maria, but also sent filmmakers around the world. 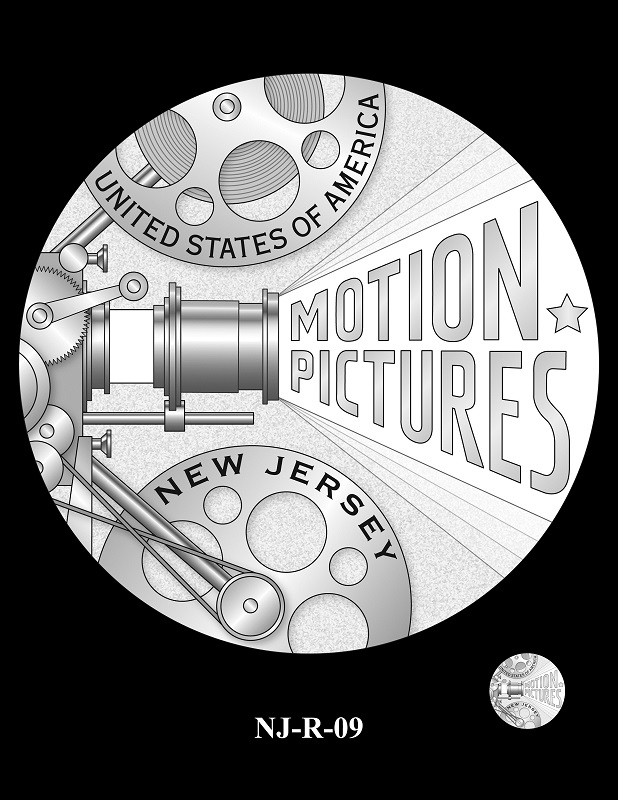 NJ-R-09 depicts a stylized Edison Kinetoscope movie projector with “Motion Pictures” displayed in an expanding beam of light emanating from the projector. 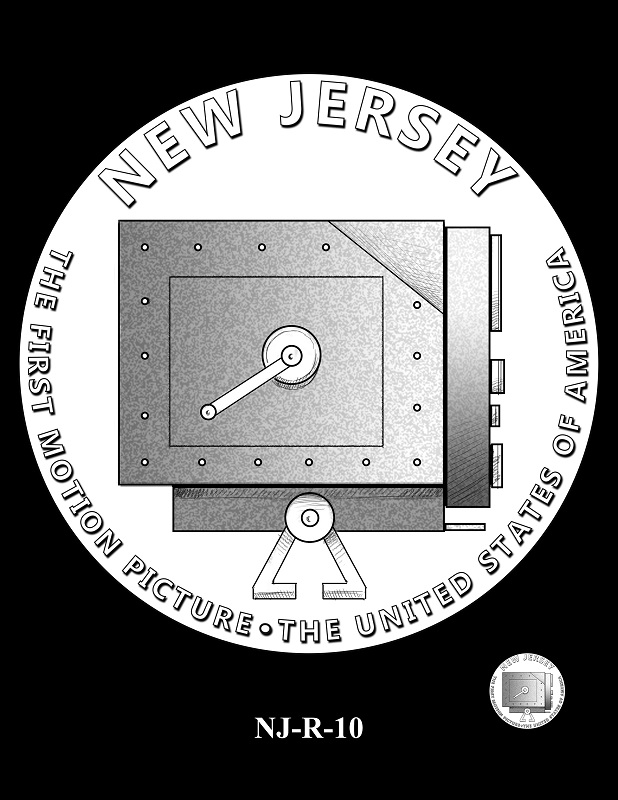 NJ-R-10 depicts an early Edison motion picture camera viewed from the side. 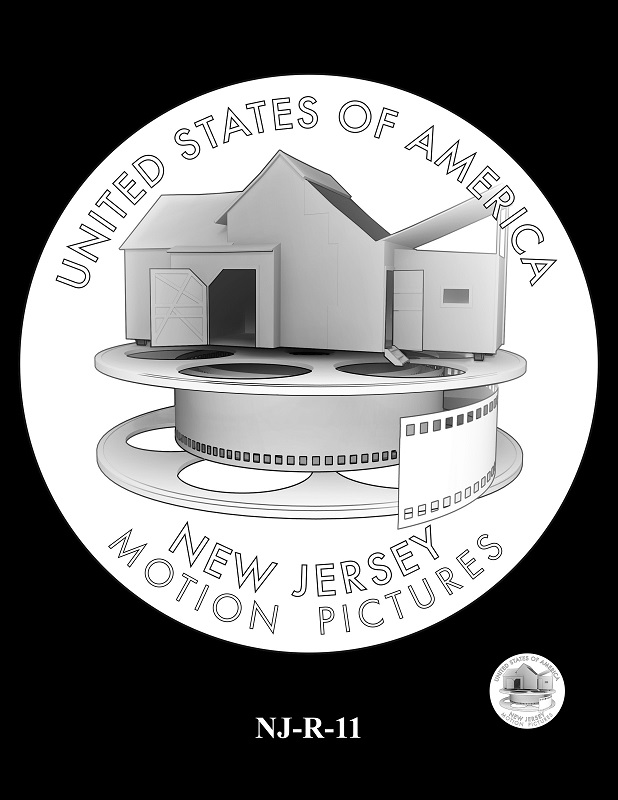 NJ-R-11 depicts the Black Maria, the first film production studio, built on the grounds of Edison’s laboratories. The studio had a large window in the ceiling to let in sunlight and was built on a turntable (depicted here as a roll of 35mm film) so it could be rotated towards the sun. 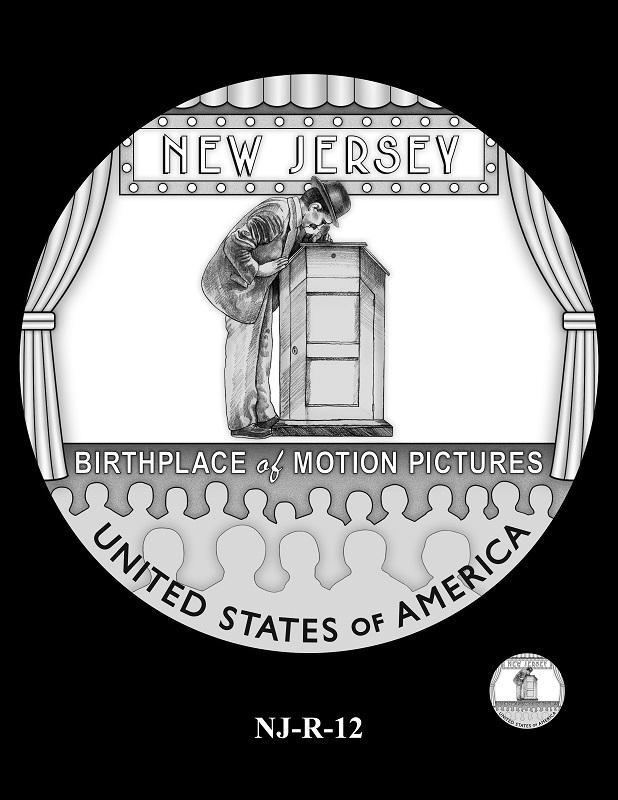 NJ-R-12 and NJ-R-13 depict a man using a Kinetophone, a version of the Kinetoscope, developed by Edison’s team. The Kinetophone was the first device to synchronize moving pictures with sound.The additional inscription is “The Birthplace of Motion Pictures.” In design 12, the man is depicted on a movie screen in front of an audience, representing the impact of Edison Labratories on the future of the American Film Industry. In design 13, a clapperboard is shown in the foreground, allowing for the synchronization of audio and video. 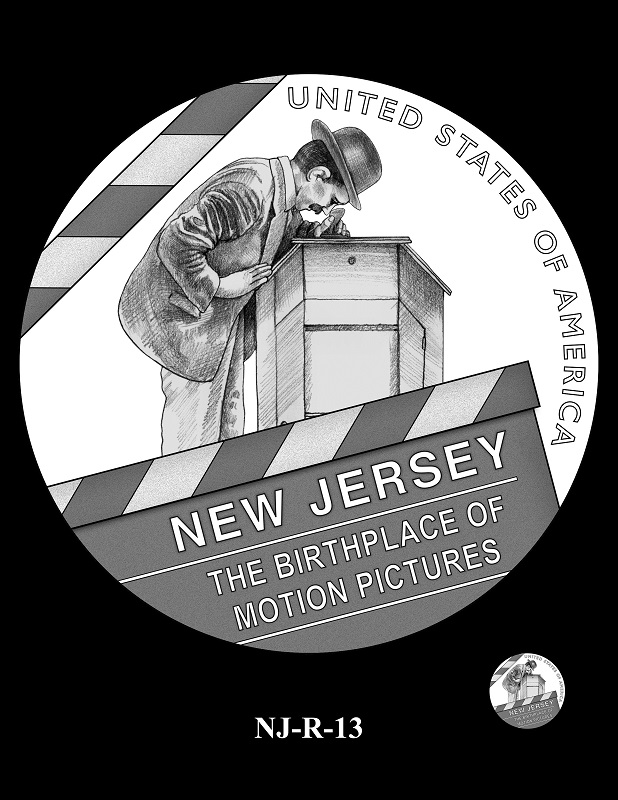 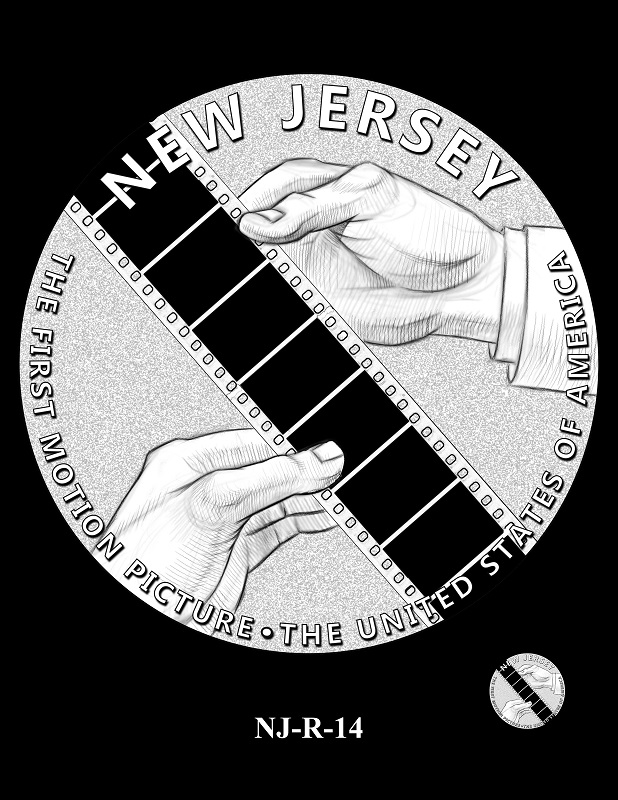 NJ-R-14 depicts the hands of a person inspecting a strip of early motion picture of film. The polished film cells will allow the holder of the coin to view a reflection in the film, creating a dynamic, interactive effect. 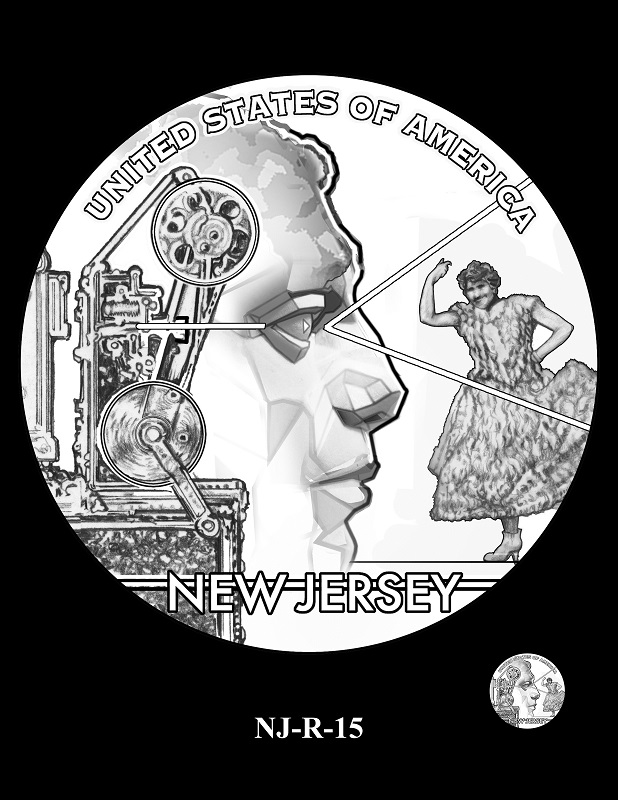 NJ-R-15 depicts a projector displaying the image of a woman dancing. Behind the projector, a stylized face represents the thought process that went into the development of the movie camera.