On April 16, at 9:30 a.m. (EDT), the Citizens Coinage Advisory Committee (CCAC) held the first of two meetings (the second was held April 17 at 10:00 a.m.) to review and discuss designs for upcoming issues by the Mint. Among the coins and medals that were reviewed during this two-day meeting period were the Mayflower 400th Anniversary 24-karat gold coins and silver medals, the 2019 American Innovation $1 coins, and the 2021-2025 American Platinum Eagle Proof Coin Series. The 2019 American Innovation $1 coins will include the states of Delaware, Pennsylvania, New Jersey, and Georgia. Below are the various proposed designs for the Georgia coins and their accompanying descriptions. Let us know in the comments which designs you would choose! 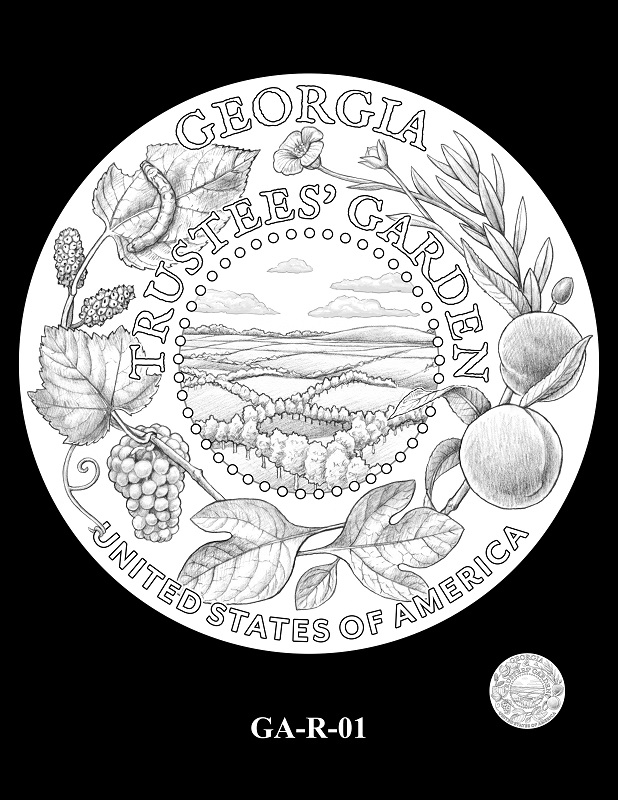 GA-R-01 depicts a simplified view of the Trustees’ Garden in the center – a gridded landscape with orange trees lining the walkways. Encircling the landscape is the inscription “Trustees’ Garden” in a rough-edged typeface, reminiscent of printed materials from the 1700s. Surrounding the landscape are six different species known to have been cultivated in the garden – flax, olive, peaches, sassafras, grapes, and white mulberry. Hover to zoom. 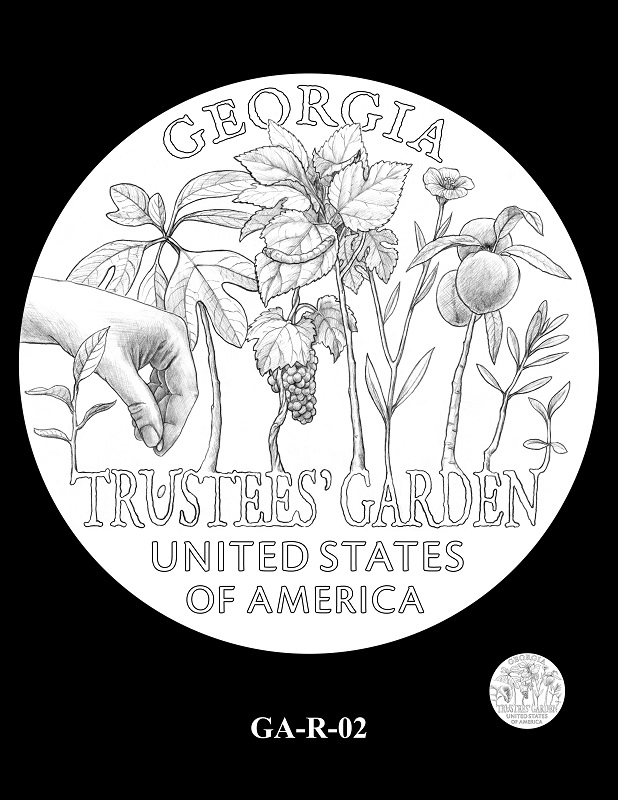 GA-R-02 depicts a hand planting seeds in the inscription “Trustees’ Garden,” from which grows a variety of species representing the variety of plants grown in the garden: an orange tree seedling, sassafras, grapes, white mulberry, flax, peaches, olive, and a young shoot too small to be identified. 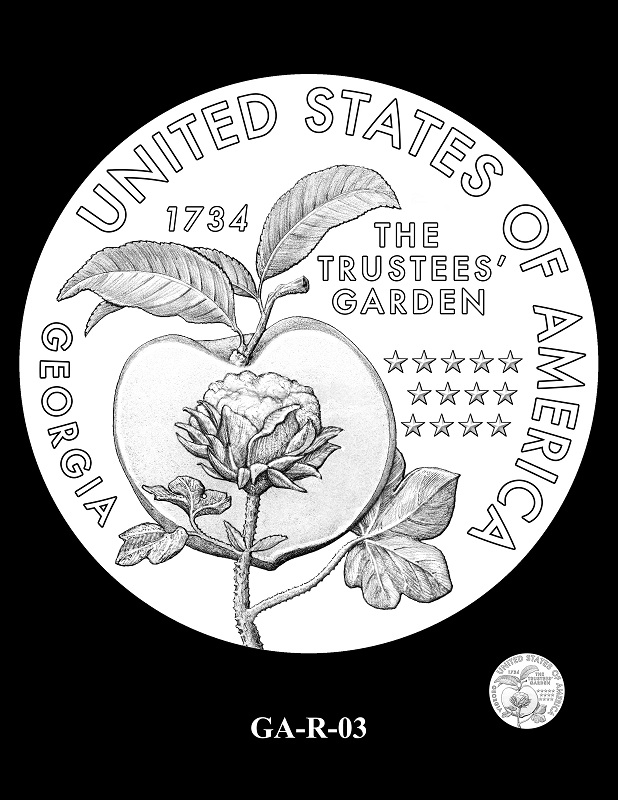 GA-R-03 depicts a halved peach overlapped by a cotton bud in open bloom, representing two important crops developed in the Trustees’ Garden. The thirteen stars represent the original 13 colonies. The additional inscriptions are “The Trustees’ Garden” and “1734,” the year the garden was established. 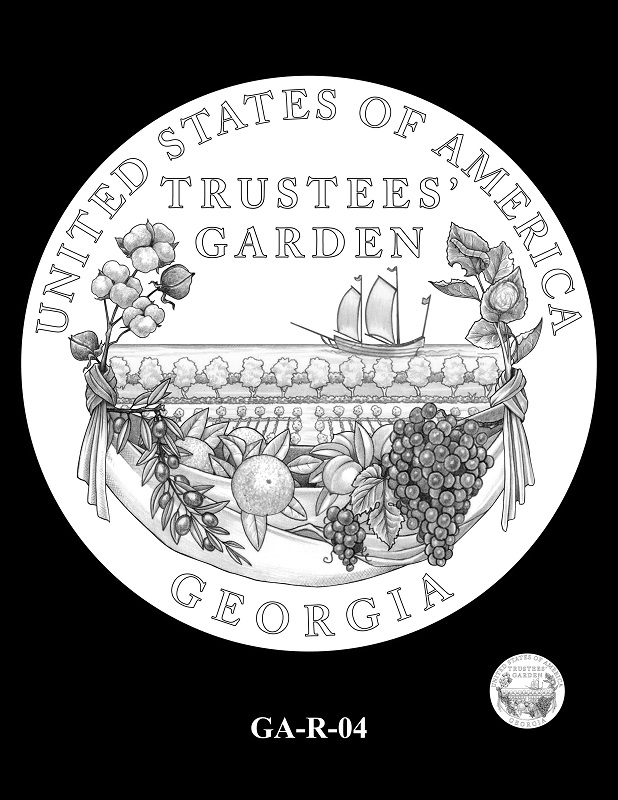 GA-R-04 and GA-R-05 depict a sling made of two sashes, a cotton sash knotted around a cotton branch and a silk sash knotted around a mulberry branch. The sling is full of plants harvested from the Trustees’ Garden: Jesuit Bark, olives, oranges, peaches, grapes, and smooth sumac. The background in Design 05 also features a stylized version of the Trustees’ garden with rectangular plots lined by orange trees and set by the Savannah River. The additional inscription is “Trustees’ Garden.” 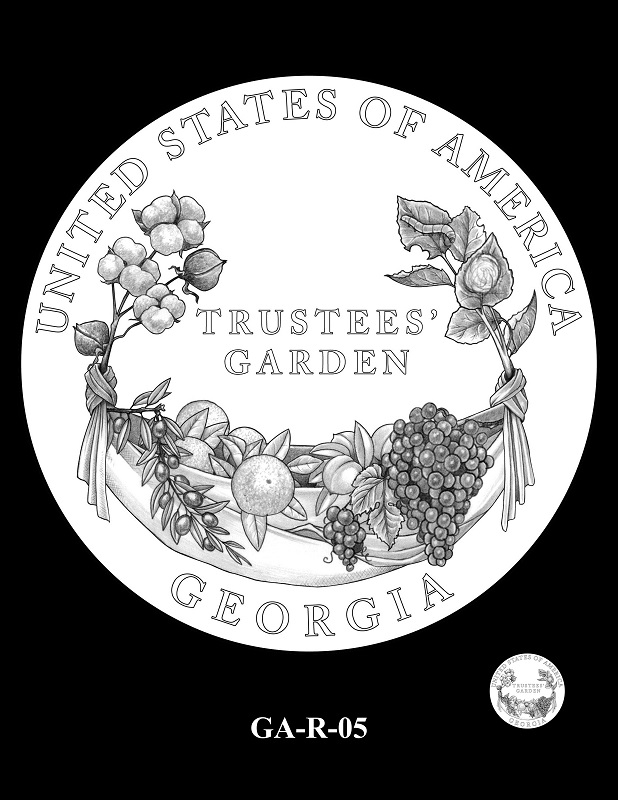 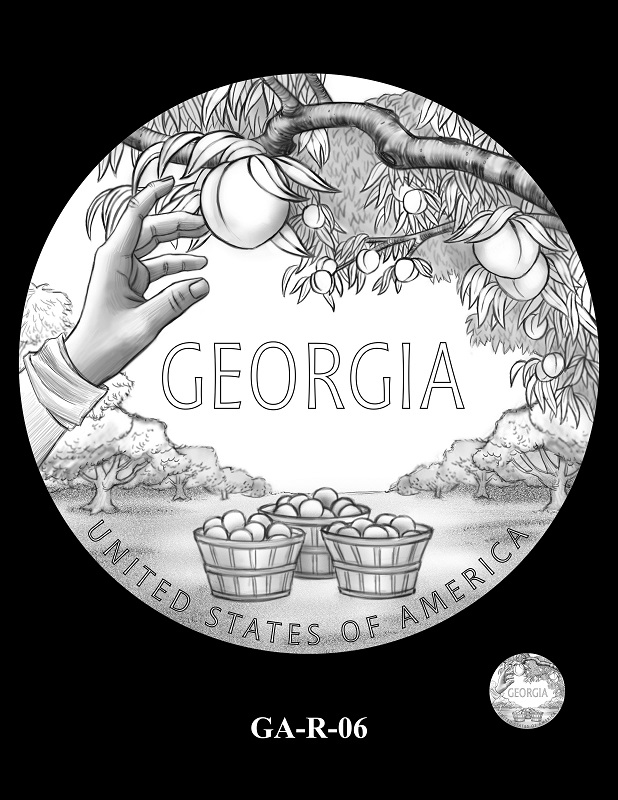 GA-R-06 depicts a farmer picking a ripe peach from a tree grown in the Trustees’ Garden. Below the tree sit baskets of freshly picked peaches.