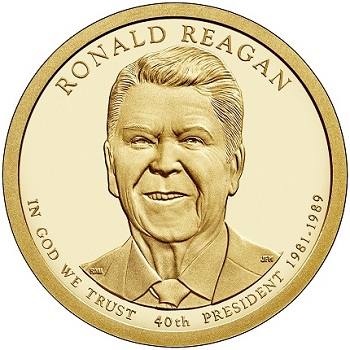 The U.S. Mint unveiled the chosen designs for the upcoming Ronald Reagan Presidential $1 Coin and the Nancy Reagan First Spouse Gold Coins on Saturday, February 6, at a launch ceremony at the Reagan Presidential Library in Simi Valley, California. The event took place as part of annual celebrations honoring the President’s birthday, and was attended by several special guests and speakers.

The Ronald Reagan $1 coin will be the third and final Presidential dollar released in 2016, and will mark the conclusion of the series, which launched in 2007.

The reverse, designed and engraved by Don Everhart, is common to all Presidential $1 coins. It includes an image of the Statue of Liberty beside the coin’s $1 denomination, with UNITED STATES OF AMERICA curving along the rim. 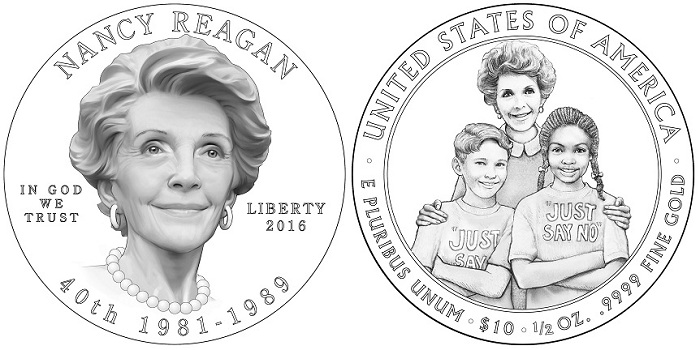 The obverse of the Nancy Reagan First Spouse Gold and Uncirculated Coins was designed by Benjamin Sowards and sculpted by Joseph Menna. It features a portrait of Mrs. Reagan, with the inscriptions NANCY REAGAN, IN GOD WE TRUST, LIBERTY, 2016, 40th, and 1981-1989.

The reverse image features the former first lady with two children wearing shirts associated with her “Just Say No” campaign, which urged young people to avoid drug use. Inscribed on this side of the coins are UNITED STATES OF AMERICA, E PLURIBUS UNUM, $10, 1/2 OZ., and .9999 FINE GOLD. It is highly unusual for a living person to be featured on U.S. coinage; this unique situation allowed Mrs. Reagan the opportunity to give her input on the designs before they were finalized.

The 2016 Ronald Reagan Presidential $1 Coin will soon become available as part of the 2016 Presidential $1 Proof Set, due out on February 16. Beyond that, Reagan dollar and First Spouse products are currently slated for release in July and August.